As sustainable energy moves up the political agenda, low carbon solutions for heating and cooling (almost 50 percent of the total energy consumed in Europe) are increasingly important.

Ownership of the district heating sector is largely concentrated in the 10 biggest companies, which supply heat to over 1.125 million households. International companies (Dalkia, MVV) are active on the market but a large part of the sector is owned by municipalities and (in many cases) leased to private companies.

In a nutshell, co-generation (also known as combined heat and power or CHP) technologies allow for the simultaneous generation of heat and electricity, increasing the overall energy efficiency of the conversion process by partially recovering heat produced during electricity generation.

The heat can be used for a variety of purposes including industrial processes as well as to supply the needs of buildings. To distribute the recovered heat from the co-generation site, a district heating network (high-efficiency, insulated piping system circulating water) brings the heat to residential and commercial buildings for applications such as space heating and water heating. Co-generation and district heating go hand-in-hand – in 2011, some 79 percent of all district heating in OECD countries was produced by co‐generation plants. 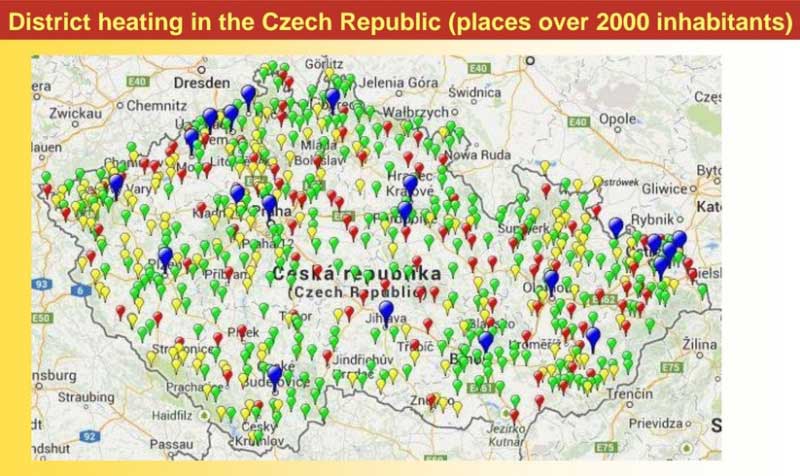 Currently, around 70 percent of the heat distributed in district heating networks in Czech Republic is produced by CHP. Solid fossil fuels (brown and black coal) are the main fuels used for electricity production from cogeneration with more than 75 percent share of all fuel used by CHP plants.

Natural gas has a 7.5 percent share, and renewable energy sources (mainly biogas and wood) are at almost 8 percent share.

EU subsidies along with national support schemes for renewables have been important drivers here – however, these grants are being phased out, and are set to end completely in 2017.

Energy expert David Borovský who is participating in the SDHplus project explains more:

“There are two main groups of systems operators here in the Czech Republic. The first and most important part of the market is represented by operators of systems with large scale CHP coal based plants. This group is working with legislative requirements (to reduce CO2 emissions) upcoming in 2016,” he said.

‘The second group consists of stakeholders who operate small or mid-scale systems with natural gas boilers or natural gas CHP. This group is deeply focused on utilization of CHP units in system because natural gas CHP is significantly supported by national subsidy schemes and legislation, including the National Energy Plan.’

Deep de-carbonisation of the sector however requires a long term switch to renewables.

Of these renewable energy source options, at present there is most interest in biomass and biogas, according to Borovský.

Veolia Energie Mariánské Lázně, under a lease agreement with the municipality, operates the district heating network serving 40 percent in the town of Mariánské Lázně. Originally powered by heavy fuel oil and then replaced by natural gas, the system is now powered by biomass (wood chips). Commissioned in December 2013, this has resulted in CO2 savings of 17,000 tons. Customers also benefited from two price reductions in 2014.

“Energy management is a strategic axis of our local development,” says Litoměřice Mayor Ladislav Chlupáč. The city council has focused on sustainable energy since 2012 resulting in financial savings of about 7.5 million Kč (€270,000).

Following analysis of local resources, the city council decided to build a geothermal CHP plant which will produce 18.4 GWh of energy per year and will feed a district heating network. Litoměřice’s vision of its future: “clean air and energy independence.”

The Regional Energy Agency of the Moravian-Silesian region is taking part in the Intelligent Energy-Europe funded project STRATEGO, helping cities and regions to map local heating and cooling demand and supply and identify priorities for intervention.

Future plans for the Moravian-Silesian region include the ambition to power heat networks using recovered heat from sewage. According to project engineer Pavel Koláček, “This is a pioneering project for our region.”

Along with growing the share of CHP and renewables, many Czech heat networks require improvement. At national level, investment aid from the European Regional Development Fund amounting to 4 billion Kč is already earmarked for the rehabilitation of existing networks. However these funds are not yet disbursed, as current administrative rules are not geared towards the distinctive pattern of ownership and operation of heat networks (split between municipalities and private companies).

At EU level, it is encouraged to find synergies between funding instruments – meaning that EU programmes can be combined to finance different phases of the same project. Project promoters are encouraged to look at synergies between European Structural and Investment funds, Horizon 2020 and programmes such as INTERREG. Recently the popular Covenant of Mayors initiative produced a quick reference guide for sustainable energy project financing available from EU funds.

“There will be significant focus on this topic in 2015. People are starting to realise the need for sustainable heating and cooling solutions in the energy transition,” said Antonio Aguilo Rullan, project advisor on energy efficiency programmes at European Commission agency EASME who are administering the energy efficiency (EE) topics in Horizon2020.

The Magic Flute at the Estates Theatre

European Fantasy Sports is Flourishing, but Investors are Eyeing India

The fantasy sports market is expanding all over the world. The industry is projected to be

Who is behind the innovative Yubo app?

Ever heard of Yubo? It is a French-based app available on the Google Play Store and

How To Stop Ads on Google Chrome

There’s nothing more annoying or frustrating than ads popping up all over your screen. Whether you’re

It’s a choice you’re probably going to have to make at one point or another: Facebook

Uses for Technology in the Profession of Science

Education has undergone significant transformations as a result of the widespread use of new technologies. Thumbing