The stage director, Vladimír Morávek, has taken a few liberties with the piece, which people will either love or hate. The second premiere did get thunderous applause, perhaps putting haters in the minority.

Before the start of the first and second acts, a seemingly recorded female voice in Czech gives some background to the play and the theater in suburban Vienna where it was first performed. The comments were a bit over the top, pointing out that some people considered the opera to be the product of divine intervention.

Printed programs with all of the history were available, so this disembodied-voice trick reminiscent of amusement park funhouses wasn’t really needed, and in a way it cheapened the production.

The intro also serves to introduce Mozart as character in his own work, a common postmodern contrivance. This is perhaps the most awkward part of the current staging.

The popularity of the film and play Amadeus, with its quirky Mozart, makes it tempting to put the composer on stage for few additional laughs. But once he shows up, there is no real role for him.

Mozart, ever drunk and sickly, just weeks away from death, is at first on the sides, waving his arms as if conducting. Perhaps the audience is to imagine that Mozart is envisioning the opera in some sort of fever dream. At times he even stands on his desk just to fall off of it, because, you know, stumbling drunks are automatically funny.

But then he speaks. The opera, really a Singspiel, is performed in German, with Czech and English supertitles. Singspiel has some purely spoken parts, without any music at all. When the actors speak their bits in German, drunken Mozart — seemingly invisible to the rest of the cast — explains the lines in Czech. And he sometimes cackles like actor Tom Hulce in the 1984 film. And he slows the pace of the production down as the spoken parts now take twice as long.

It is a bit like being at a crowded rock concert next to some overindulged stranger who keeps trying to explain the songs to you, no matter how much you ignore him. And then he — the hypothetical stranger, not Mozart — goes into air guitar solos, as if watching him is better than seeing the actual band.

If one wants to see someone waving his arm to conduct the opera, one need only to look into the orchestra pit where Jaroslav Kyzlink was doing a fine job. And the supertitles were already providing translation from German. In short, having Mozart on stage added nothing and grew a bit tiresome, even though it must have sounded like a good idea at the time.

Another odd choice was to have some characters, almost topless men in white body makeup and baroque trousers, wandering in slow motion in the aisles, holding some sort of candle in a bowl. It was easy to ignore them, but why they were doing this was never clear. It was tempting to ask them to please find a shirt and sit down somewhere as there was an opera going on, which they seemed to be quite unaware of for some reason. 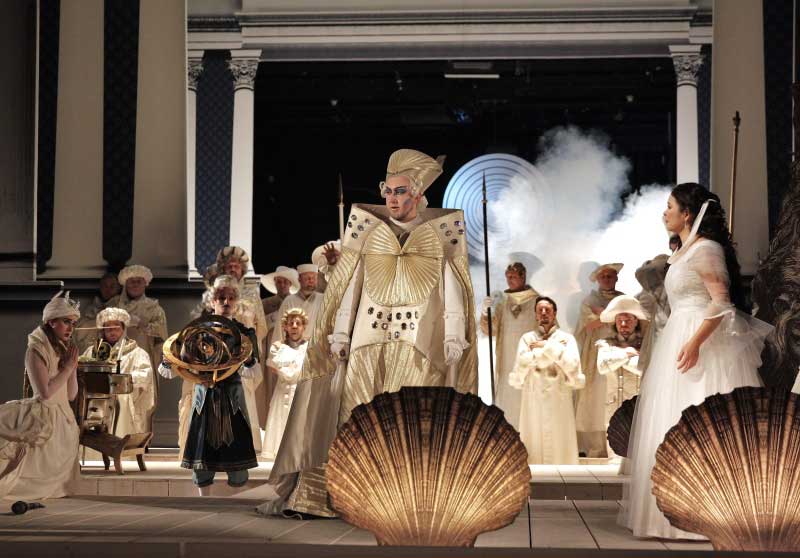 The set design is intriguing, with various backdrops decorated with allegorical images including Shakespeare’s head on an animal body as well as skulls, fantasy animals and architectural elements, all in the style of etchings one might find in a rare book.

Many of these collages by designer Miroslav Huptych were black-and-white, although especially near the end some more colorful ones appeared.

The black-and-white theme also worked its way through the costumes, with only a few characters breaking up the monotone.

The use of the backdrops was at times a bit hyperactive, with various ones going up and down within the same scene. Only toward the end was the full depth of the Estates Theatre’s stage used. It was a welcome break from the claustrophobia.

Large cardboard cutouts of an elephant with three eyes, a multi-headed lion and flute-playing mice were also wheeled on and off at various times, and props including a celestial sphere and pyramids that light up when someone pushed a button made numerous appearances without much discernable rhyme or reason.

From time to time a cardboard angel lowered from the ceiling to shoot sparks at the whole affair.

If all this was not enough, acrobats from a troupe called Long Vehicle Circus take to the stage for some flips and other tricks. One of the odder credits listed is Leona Qaša Kvasnicová for “motion cooperation.” The actual signing cast winds up lost a bit amid all the distractions.

The music, though, is still Mozart. And the story is charming, with its quest to rescue a maiden, and much-loved characters such as the Queen of the Night and the bird catcher Papageno.

The previous staging was of a Czech translation. It premièred in 1993 and ran for more than 380 shows. It is likely this new staging will stay in the program for some time as well.

The show is one of the best Prague attractions you would ever see.