The building is still not happening, but a videomapping will show what might have been

As part of the quickly approaching Letní Letná festival of new circus, one of the tents will be used for a videomapping to show what the rejected design for a new Czech National Library by architect Jan Kaplický and his firm Future Systems would have looked like.

The library, referred to as a “blob” or “octopus” by its critics, was proposed in 2007 and sparked unprecedented public ire. Supporters referred to it as an “eye over Prague,” but even that was a bit creepy.

The circus tent has the same basic blobby outline of the building, so it is a prefect match. What is even better, the tent is not very far from that proposed actual location, which was in a different part of Letná Park. 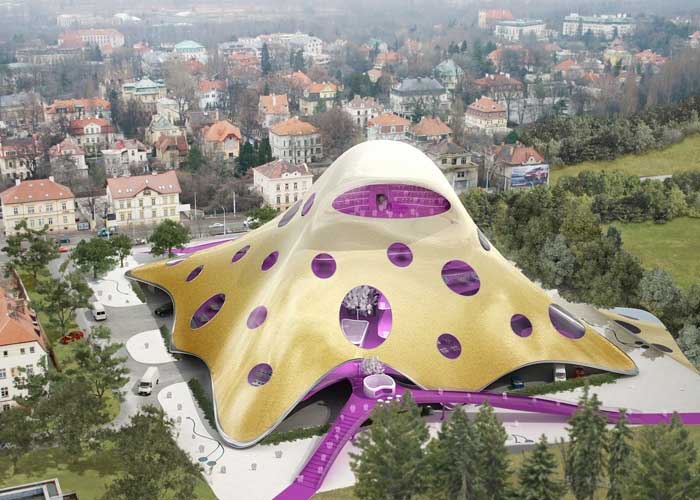 Czech-born architect Kaplický died in 2009 at age 71 during the controversy as it became more and more clear that the futuristic building would forever remain just a plastic scale model and set of sketches.

“We have wanted to do a project like this for a long time at the festival site. We are glad that we can succeed with the tent used by the group Nofit State Circus, which has the shape of the ‘Eye over Prague.’ The festival will finally have a library!” festival director Jiří Turek said, with perhaps an excess of enthusiasm.

The architect’s widow, Eliška Kaplicky Fuchsová, said she is pleased about the project and that she supports creative efforts to present Kaplický’s work.

The videomapping will be created by Cirque Garuda, which has been making similar projects since 2010. Videomapping uses projections that are specifically designed or mapped to fit onto a building or other object.

They are almost always site-specific and can either tell a story or be non-narrative. With special glasses, they can also be in 3D, and often they are combined with music or narration.

The blob project was heavily criticized by then-president Václav Klaus for being inappropriate for Prague. Klaus said he would “bodily” prevent its construction, later admitting it was an exaggeration.

Prague’s then-mayor Pavel Bém at first approved of he design, but later changed his mind as he felt it would ruin the skyline. Despite winning the architectural contest for a new library in 2007, by 2008 the project was pretty much permanently stalled, although supporters continued to champion it.

The videomapping won’t be the first appearance of the building. A bus shelter in Brno, South Moravia, was built in the same basic shape in 2011.