Legendary actress returns to the place of her family roots

Actress Kim Novak has been interested in painting all of her life, even though she is best known for her roles in films such as Alfred Hitchcock’s thriller Vertigo, the musical Pal Joey the fantasy Bell, Book and Candle, the romance Picnic and the urban drama The Man With the Golden Arm.

She began drawing as a child in the 1930s, going to Chicago train stations and trying to capture expressions on people during the Great Depression. Her parents were part of the Czechoslovak community in Chicago, and often spoke Czech at home. She even heard Czech in school, but doesn’t remember anything except for boys asking her to kiss them in Czech.

After leaving Hollywood when the studio system ended in the 1960s, she turned to painting and the arts as a way of working through her personal issues. “I always intended to be an artist, a painter, a visual artist,” she said in Prague.

“I wanted to help raise money for mental health because I have had mental health issues,” she said, adding that she found painting to be very therapeutic.

She cited painters Marc Chagall and J. M. W. Turner, and to a lesser extent Salvador Dalí, as stylistic influences, and you can see that in her use of color and technique.

Novak also gives her paintings extensive descriptions. “My paintings are realistic and surrealistic. I think they need an explanation,” she said.

“I paint in a way that I want you to be able to not just look at a few paintings. To me that is not the object of it. What I want is for you to stop and think about what is going on in the painting. … It is saying something. You need to think about it. Also I am a writer, on and off since [I was] a child. Often I put a verse with it,” she said.

“It is not always what you see,” she added. “It needs to be written about so you can understand what it is talking about.”

But she also keeps an air of mystery in her work. She says she learned a lot from great directors and actors in Hollywood that she could later apply to painting. “Alfred Hitchcock was a great teacher. … He taught me a sense of mystery. … I learned the lesson of using mystery in a painting but also giving clues but not giving all of them,” she said. Referring to Vertigo, she said that she told Hitchcock she didn’t understand some of the scenes. “It doesn’t make sense,” she said.

Hitchcock answered, “But , ahh! That is what mystery is my dear.”

“And I thought, ‘That is interesting.’ You don’t always give everything away.’  And this is for painting as well. In painting you don’t want to explain everything. Always leave a little something to the imagination. … You don’t want to answer every question,” Novak said.

“There are things I put in my art and I use from my art that I learned from the great directors. … So I am grateful for the people that I worked for in films,” she added.

She also learned to do things the way she wanted without listening to the critics. She takes the approach that time will tell what is good and what is not, and one shouldn’t pay too much attention to passing fads.

“If Alfred Hitchcock did what people wanted, he would have changed Vertigo many times.… It is important that he did it the way wanted to. And therefore it is today voted best picture ever made,” she said.

Vertigo beat Citizen Kane for the top spot in Sight and Sound magazine’s survey of critics in 2012. The poll happens every 10 years.

Her painting is very personal, and it is not important for her to get it out in front of the public. It is only recently that she has put up a website. “I seldom sell the originals,” she said, although she now sells limited edition prints.

Novak also wrote a memoir, but nobody will ever have a chance to read it. “I wrote a book and my drives and all the computer copies, I kept them in my house. And my house burned down. The second time. I call it fate. Perhaps what it was saying is perhaps that the important thing was that I wrote it. And it was almost complete,” she said.

“I did it. And it was a catharsis. I shed some tears. That is a catharsis too,” she said. “And It thought how important is it that it comes out? Some people like it, a lot more people don’t. And again, going to the critics. Is that important? Not to me. The important thing is that I did it.” She says it is unlikely she will try to re-create it.

The book was not done with a ghost writer, and was quite complex. It used a flashback structure. One hint she gave was that it began in current times with the birth of a horse, since her husband since 1976 has been a equine veterinary doctor. The red from the blood at the birth leads back to time in the past when Novak wore a glamorous red sequined gown at the premiere of a film.

She didn’t want a structure where people could go to certain chapter for gossip. She wanted the whole book to be read, with something from bad to beautiful on every page.

She was interested in coming to Prague since her family has roots here. She had been here to then-Czechoslovakia once previously in the 1960s with her parents to visit family. “I remember seeing a puppet show. I was so impressed. It was so special. And we stayed with family members and we stayed with a pig. They had to bring the farm animals into the house,” she said.

One of her great regrets, we said, was not paying attention to her father when he tried to explain family history because now she has no way of finding any places or people in the Czech Republic connected to it. “I was too busy being interested in boys,” she said. “I never really understood the whole story. [My father] tried to explain all of these things.”

She referred to one of her paintings of a Czech woman. “I wonder about her. I wish I had listened more to my parents. I know I am related to this woman.” 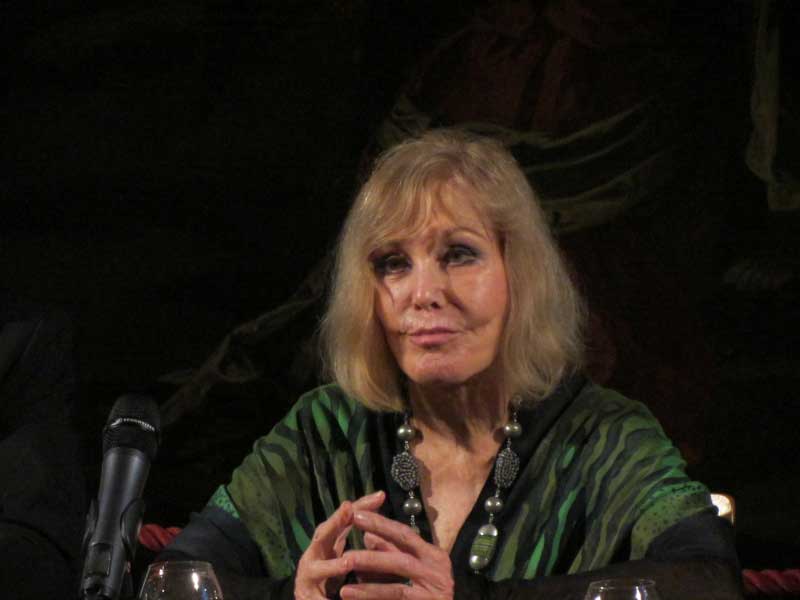 While in Prague she presented Febiofest with a painting called After the Reign as a gift. It was inspired by her liking of Czech puppet shows, and shows a puppet being released from its strings. She compared that in a small way to her own journey and being released from the strictures of Hollywood into her own artistic freedom.

“While preparing my early sketches I realised I was reliving my own experiences of what I was feeling while under contract and control of the Hollywood studio system. Although it is not to be compared with what they endured, somehow I felt the need to bring my puppet out from the cloud and the rain and get free from my brain,” she said.

While at Febiofest she also received the Kristian award for her contribution to world cinematography.

Asst. dean: All MBA programs are not alike