Julian Assange’s new book, When Google Met Wikileaks is not really a new book at all; it is a minimally edited transcription of a secret meeting he had with Google’s Erich Schmidt and Jared Cohen back on June 23, 2011. 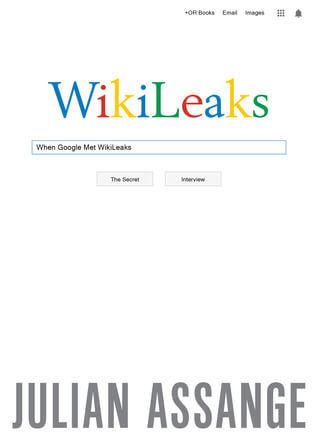 When Google Met Wikileaks
by Julian Assange
OR Books, 2014
200 pages

It took place in rural England, while Assange was under house arrest and dealing with the aftermath of the funding-freeze on Wikileaks, arranged by the US State Department, in retaliation for his publication of war-related secrets leaked to him by Chelsea Manning, including the now-infamous Collateral Murder video.

When Google Met Wikileaks includes excellent links and notes which, in e-book form, can be clicked, instantly bringing the reader a wealth of background and further information that serve to deepen and more fully contextualize the themes of the secret discussion.  It contains an important introduction, which delves into the Google political philosophy, with disturbing examples of it in action. WhenGoogle Met Wikileaks is an extension to the scathing New York Times review he gave The New Digital Age, which is a critical event worth celebrating in itself, and it more closely unpacks the clearly premeditated trashing of Assange that took place in their book.

The most important accomplishment of the book may be the connection Assange establishes between the Google Politic and the ambitions set loose in Digital Age. The Schmidt-Cohen tome was originally titled The Empire of the Mind, which is in much closer alignment to their politics than the wonky-sounding Digital Age, because at work in their book is an idealized vision of the world after neo-con American Exceptionalism has forcibly broken through every global barrier and established its neo-liberal dominion over all people and resources of the earth, with future presidents being the new emperors at the end of history, as Francis Fukuyama hath ordained.

In his introduction to When Google, Assange cites a 2010 Foreign Affairs piece Schmidt-Cohen wrote, “The Digital Disruption: Connectivity and the Diffusion of Power,” in which the dynamic duo discuss in detail future “coalitions of the connected” made possible with technologies “overwhelmingly provided by the private sector.”  Assange pulls up this telling quote:

“Democratic states that have built coalitions of their militaries have the capacity to do the same with their connection technologies. . . . They offer a new way to exercise the duty to protect citizens around the world.” (Assange’s emphasis added.)

Like the justification George W. Bush used to ignore sovereignty and make war in countries “too weak or unable to fight terrorism,” the ‘duty to protect’ principle, is a militaristic co-optation and corruption of humanitarian intervention theory, as well as the clearest indication yet that the Internet has already been militarized and that we are now in the normalization phase.

As a literal battlefield it is to be controlled by the strongest military, making Obama, as Commander-in-Chief the principle ‘decider’ for future Internet policies. Schmidt-Cohen are the Good Cop face to a long-time extant US foreign policy succinctly summed up, absolutely unapologetically, by Bad Cops, like former Latin American CIA chief Duane Clarridge, who helped arrange for the overthrow of Chile’s Salvador Allende. Says Bad Cop Clarridge, “We’ll intervene whenever we feel it’s in our interest to so, and if you don’t like it, lump it. Get used to it world. We’re not going to put up with any nonsense.” There is no functional difference between the political principles espoused by Schmidt-Cohen and that of Clarridge. None.

“Why is it Julian Assange, specifically, who gets to decide what information is relevant to the public interest?” Schmidt-Cohen whine in Digital Age, and “what happens if the person who makes such decisions is willing to accept indisputable harm to innocents as a consequence of his disclosures?”

As Assange points out, this is not only a proven falsity, but merely rhetorical, because soon Schmidt-Cohen answer by saying all leaks should go to “a central body facilitating the release of information” and that whistleblower publishers need “supervision.”

And this begins to get at the heart of the matter: dissidents need to be accounted for, contained as a subset, and controlled. After all, most of them are just kids (more than half the world’s population is under 30, and growing) and Schmidt-Cohen, and the State Department, are worried sick about what these youngsters might get up to.

As Schmidt-Cohen observe, “the mix of activism and arrogance in young people is universal.” This isn’t the first time they raised this sentiment either. During the secret meeting with Assange, Scott Malcomson, an associate who accompanied Schmidt-Cohen observed, “Young people aren’t inherently good. And I say that as a father and with regret.”

Schmidt-Cohen and the self-described “old people” who secretly met with Assange seem to have had a notion already in motion as to how they would shepherd and influence young people, but they are still looking for shaping mechanisms, triggers they can apply. That was the value of the recent secret Facebook-DoD experiment: to manipulate community emotions toward action, the way it was done in the Joseph Kony saga, where children were rounded up by a Christian evangelical ‘activist’ overnight on Facebook and put to the task of proxy vigilantism. (Kony is still free today, and no one seems to be looking too hard for him).

As with leaks, the plan is to shepherd youngsters into central crowdsource pens for them to vent their disaffection and participate in “constructive” dissident campaigns. The preferred choice, of course, is movements.org, affiliated with the “centrist” doctrines of the day, and neo-liberal causes, and their main goal is to knock down “dictators” everywhere, even if freely elected; it’s the American Way. Movements.org is just one more arm of co-optation and control, and Google’s Schmidt chairs its board of directors.

Meanwhile, Eric Schmidt and Jared Cohen and Jeff Bezos and Pierre Omidyar, and all the other “activist” billionaire philanthropists are free to do the adult freedom-fightin’; working with the NSA to drill down to unruly dissidents; or creating algorithms that the CIA can use to track, well, anybody; or pouring money into coups in places resistant to neo-liberalization,or even meeting up with rebels to organize resistance as Cohen says he’s done.

When Google Met Wikileaks raises constructive ways around the growing totalitarian state, including the use of mobile peer-to-peer communications that don’t require going through a telco; comprehensive encryption (files and communication); and the use of non-persistent operating systems on a USB stick or DVD, such as TAILs.

This will be the face of freedom in the new digital age: Running and hiding and subverting goofy billionaire philanthropists who only want what’s best for you, who only want to help you make the right choices, all watched over, as Adam Curtis would have it, by machines of loving grace. And if you won’t be watched over, you will be targeted, put on the president’s future Tuesday morning hit list. You will never see it coming.

John Kendall Hawkins is an American ex-pat freelancer residing in Australia. His op-eds, features and book reviews have appeared in publications in the US, Australia and Europe. He can be reached at [email protected]
Share this

Slovak priest: Jews are to blame for Holocaust