The City of a Hundred Spires has at least that many unhappy spirits, according to legends

A city doesn’t get to have as many historical sites as Prague does without gathering a few ghost legends along the way.  The city’s center is just crawling with those who refuse to go quietly into the next world, according to various popular books and some self-proclaimed experts.

Even if the ghosts don’t really exist, the legends have been around seemingly forever. Many ghosts are benign, but some are truly not to be messed with if you encounter them. But, truth be told, encountering them is rather unlikely these days. Even with mobile phone cameras, nobody has been able to snap a shot of any of these legendary figures yet. There are even walking tours for ghost hunting. Who knows? Maybe someone will snap on one of these tours.

The Golem, Prague’s most mysterious and enduring Jewish legend, is closely associated with Rabbi Loew, also known as the Maharal of Prague, who died 400 years ago. Loew was the chief rabbi, and thus leader, of Prague’s Jewish community from 1596 to 1604. This was during the reign of Emperor Rudolf II, who, as monarch of the Holy Roman Empire, made Prague the center of his esoteric activities. According to legend, he even visited Rabbi Loew’s home in the Jewish Quarter, along with the famous German astronomer Johannes Kepler and the Danish alchemist Tycho Brahe.

In the Hebrew bible, there is a word similar to Golem – “Golmi” – used in the Talmud to describe something that is unfinished and requires completion. It can also refer to a primitive person. The Talmud contains a story about an artificial man created by a third-century scholar named Ravi, and it also describes other scholars studying the mystical Book of Creation to create a small calf in an effort to imitate an act of God.

There are also medieval records from the Ashkenazi Jews of Eastern Europe referring to the creation of Golems from earth and water, which were animated by the mystical efforts of scholars through a combination of Hebrew letters. For Sephardic Jews, this same effort of combining letters involved ecstatic meditation, leading to the creation of a spiritual Golem.

Elijah Ba’al Shem of Chelm, who was a practitioner of the Kabbalah, is said to have created a Golem that went out of control and injured him. According to this legend, Elijah, who died in 1583, then had to destroy his creation. A variation on this story ends with the Golem killing him.

Prague’s Golem is a legend first found in Bohemia and Poland in the 17th century. It grew in popularity at the beginning of the 19th century through the German Romantics, then was used in Czech art by National Revival figures such as Mikuláš Aleš and Alois Jirásek.

The Prague Golem is a figure of revolt and destruction, an artificial man who ends up threatening his creator. In 1909, a book by Yudel Rosenberg, The Wonders of the Maharal, told how Rabbi Loew created the Golem on the banks of the Vltava River to protect the Jewish community, which was under attack due to the blood libel, a rumor that Jews were making Passover bread from flour, water and the blood of Christian children. This gave the Golem a new face, which was developed further in Gustav Meyrink’s novel The Golem (1915), illustrated by Prague native Hugo Steiner-Prag. Meyrink brought the Golem into 20th-century literature as a “formless phantom, a figure appearing from time to time in the ghetto streets like the materialization of collective thoughts, feelings, dreams of its inhabitants.” 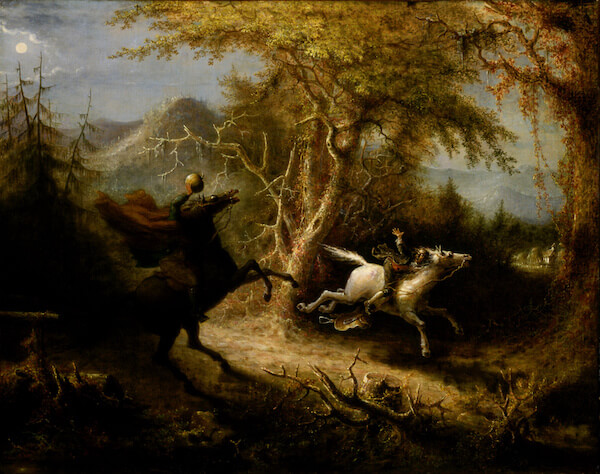 One of the most famous ghosts is a former member of the Knights Templar. His face is a bit hard to recognize, mostly because he is headless. Exactly what his crime is has long been forgotten, but he was beheaded at the Monastery of St Lawrence and after that began making midnight rides on Liliová Street. The monastery, after leaving the hands of the Templars, became the Church of St Anne, and then a warehouse for a printer. It is now Prague Crossroads, an international spiritual center. Sometime after it became a warehouse, the ghost became inactive, according to the legend, because he felt disrespected having to share his home with boxes of paper and went someplace else.

What is now the Ministry of Foreign Affairs was at one time the home of the noble Černín family. The countess at the Černín Palace was rather extravagant, even though times were tough. She allegedly bathed in milk and wore all kinds of jewels and finery. But even the devils had enough of her when she started to wear shoes made out of bread while the peasants starved. Nine devils dragged her down to hell, but at midnights she still haunts the palace. Since business hours at the ministry are pretty much what one would expect at a government office, her haunting must be pretty lonely.

The caretaker at St Peter Na Poříčí, in New Town, was quite a card player in his spare time. When an epidemic swept through the city, one by one his gambling companions died. Accounts differ as to whether he dug up his friends or got them before they were buried, but apparently with the help of the devil he reanimated them for a few final hands of cards. He has been cursed ever since and sometimes can be seen shuffling cards and trying to entice someone to play with him. If you win, then his soul can be freed. For some reason, though, he never loses. A mysterious yellow light can sometimes be seen in the churchyard above where his grave used to be.

Few cities have a statue of a ghost. On Platnéřská Street there was a house called At the Iron Man, with a stone statue of a knight above the door. That house is now gone, and the original statue is in the Municipal Museum. When City Hall was built near the original site, sculptor Ladislav Šaloun made a large stone copy of the faceless knight, who is said to have killed his lover in a fit of rage. The knight was turned to stone as punishment. He can be freed by the love of a pure-hearted woman but only once every 100 years on the anniversary of the murder. The exact date, alas, has been lost to history. Some sources say the most recent anniversary was in 2009, and if that is the case his next chance will be in 2109. The stone ghost of the murderer is waiting in plain site to be revived. 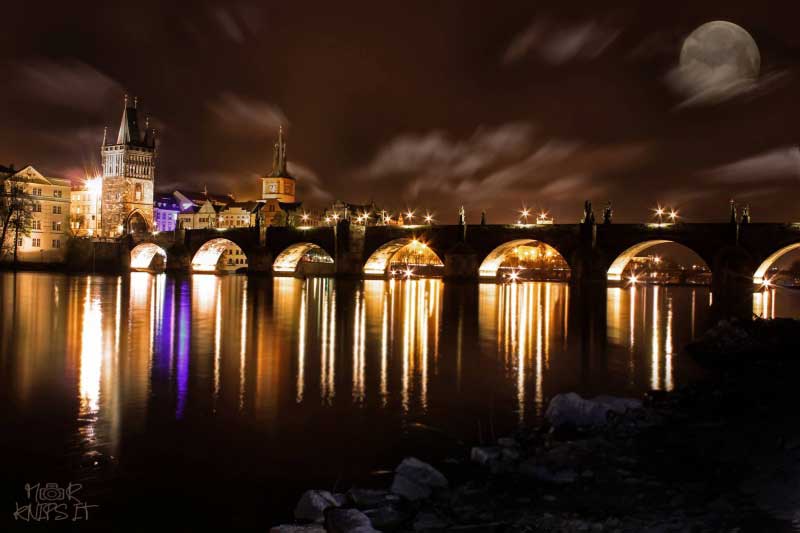 Ever hear the phrase that someone was so careless they would lose their head? Well, that happened to Burgomaster Jiřík Švenkhamr in 1386. He left the town’s seal lying around and his child brought it into the bathwater. His wife then dumped the water into the gutter. A citizen found the seal in the muddy trash and nobody was amused. After a quick trial the burgomaster was beheaded at St Martin’s in the Wall. He wanders the area at noon and midnight, scaring and scolding people who have been forgetful and careless.

A captain from Carpathia said to be related to Vlad Tepes was part of the army that laid siege to Prague in 1848. He used to go to the pond at Stromovka and order the fish into military formation. A patriotic miller caught him and killed him, leaving him in the water. He would have followed family tradition and become a proper vampire, but he was too waterlogged. He now lives on dead fish, only occasionally having enough strength to get out of the mud to try to attack a human. So far, he has only caught two people who were too slow or foolish to run away.

Back in the days of traveling Wild West shows, one of the troupe members died of a lung ailment. The man, alleged to be from the Apache nation, asked to be sent back to his homeland. Not only was his wish not granted, but he wasn’t given a proper burial as he was looked on at the time as a heathen. His spirit can be seen in the evening near Na Františku, begging the fading sun to help him get home. If any relic of his, either a piece of clothing or one of his bones, ever makes it back to the American West, his spirit will be freed.

Back when good skeletons were hard for a medical school to come by, it was not unusual for people to sell their bony framework in advance. A servant in the Karolinum in Old Town was over two meters tall. An old anatomy professor wanted his skeleton and asked the servant how much he wanted for it. The servant asked for 30 gold coins, thinking he would surely outlive the elderly teacher and the deal would be forgotten. He got the coins and became so drunk that became easy prey for cutthroats, losing not only his remaining 29 coins and change but his life. The professor got his skeleton. From time to time the skeleton wanders around Celetna Street, begging drunken people for coins so he can save up and buy his freedom. But with the price of gold these days, it seems a distant dream — even though the area is full of drunken people to beg from.

Vyšehrad has a number of ghosts, according to experts in such matters. One that used to be pretty fearsome is of a French major from 1741. He died in battle, and never quite grasped that the war had ended. He is credited with killing and strangling many soldiers when Vyšehrad was a military complex. Some of those who saw him were so frightened that they lost their voices. But he started to calm down in 1892 once a soldier saluted him and showed proper respect. Since then he has not been so angry. But if you encounter him and are wearing some sort of uniform, it is best to still salute him just to be safe.

Several ghostly dogs, cats and horses wander the municipality, and such beings are not all that unusual in legends. But near the millhouse on Kampa Island one can find the burning ghost of a turkey on Good Friday. It isn’t burning because it was too well done. The miller was a glutton, and ignored the then-religious rule banning the eating of meat on Fridays. He didn’t want to wait for Easter Sunday for a big holiday meal and started eat at the symbolic time of Jesus Christ’s crucifixion. The miller died within a few hours of some intestinal trouble, and the seeming innocent turkey now turns up in flames on the occasional Good Friday and causes damage to any and all who try to intervene. It is impervious to weapons and fire extinguishers.  The turkey has not been seen, however, since the Vatican reforms in the 1960s allowed for people to eat meat on Fridays, even though Good Friday is still an exception.

Hindus urge Czech brewery not to use Lord Ganesha image