One of the last five northern white rhinos has died in Dvůr Králové Zoo in the Czech Republic. Outlook for the survival of the species remains bleak. She was the last of her kind kept in a zoo in Europe.

Nabire, as the rhino was known, died from a ruptured cyst on July 27.

“It’s an undescribable loss. Nabire was the kindest rhino that was bred in the zoo. It is not just that we were very fond of her. Her death is above all a symbol of the catastrophic decline of rhinos as a result of senseless greed. With the death of Nabire another animal species approaches complete extinction,” zoo director Přemysl Rabas said on the Dvůr Králové Zoo website.

The death was not unexpected, and some precautions were made. Zoologist Jiří Hrubý said the massive cyst that Nabire had was impossible to treat. After it was drained of liquid it still weighed 40 kilograms.

“Nabire had health complications for an extended period of time. Because it was one of the last living females of its kind on earth, the zoo ensured the collection of genetic material that could help in the effort to rescue northern white rhino from extinction,” said Otakar Ruml (KSČM), the local councilor for tourism in the Hradec Králové Region.

Previous reports stated that Nabire was unable to breed naturally and that she only had one functioning ovary. Genetic material was harvested from the remaining ovary in the fall of 2014. More material was taken after Nabire’s death, including the healthy ovary and other cell samples that could be used for artificial reproduction.

Nabire was born Nov. 15, 1983, at the Dvůr Králové Zoo and spent her entire life there. She was only the second northern white rhino bred in captivity.

The Dvůr Králové Zoo has been working for about 40 years to save the northern white rhino, who, like other rhinos is poached in the wild for its horn.

With the loss of Nabire, only four members of the species are known to exist. One female is at the San Diego Zoo in the United States, and three are in the Ol Pejeta Conservancy in Kenya, Africa. These three were transferred there from the Dvůr Králové Zoo.

A fourth rhino that had been in Kenya, a male names Suni, died of old age in 2014. Samples of his sperm have been frozen. 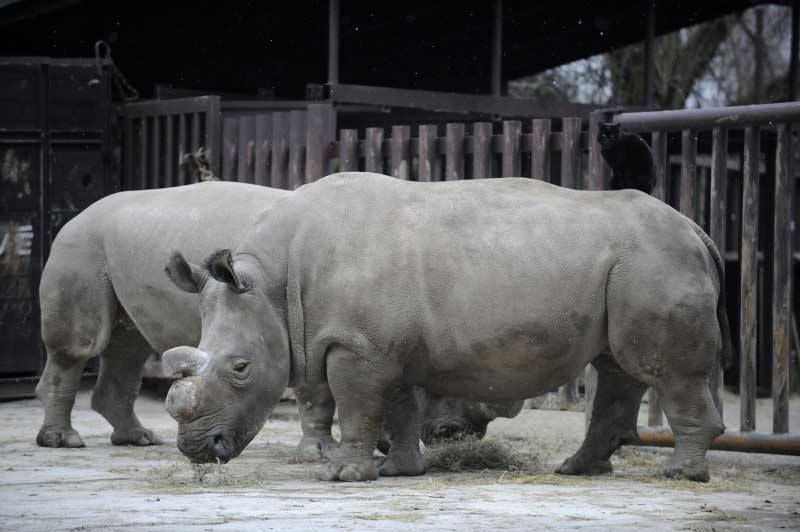 Despite the grim outlook, the zoo will continue to try to save the species. “We feel it is our duty to try to save them. We are the only ones, perhaps with the San Diego Zoo, who can do it because of the amount of biological material we have collected. But we are of course aware that the chances of success are slim,” zoo director Rabas said.

Attempts at artificial insemination of the remaining females had been unsuccessful, and in 2009 the zoo decided to move the remaining fertile females and males to the wild. There, the females’ health improved and their hormonal activity returned to normal. The hope now is that they will reproduce naturally.

At the same time, the Dvůr Králové Zoo is working with experts in Berlin regarding the fertilization of the harvested eggs and their possible implant into females of the closely related southern white rhino species. Eggs from the remaining two females could also be used in this manner.