Robotic automation and artificial intelligence have changed the face of our society. Robots have already replaced human workers on factory production lines, building everything from toy cars to real ones; and in agriculture, picking and processing nuts and grains with greater efficiency than any human labor force ever could. This wave continues, with drones, driverless cars, even AI medical diagnostics. Is there anything a human can do that a computer can’t do better, or are humans in danger of becoming obsolete?

The worry for millions of people is that they may be replaced in the workforce, either by a robot or by a software AI program or algorithm. And that’s a reasonable concern. Robots are now replacing cruise ship bartenders, truckers, pizza delivery drivers, maybe even you. Thank you to Online Casino Betway for their research below, which was taken from their blog.

The Changing Face of the Workforce

According to a new report from the McKinsey Global Institute, AI and robotic automation could eliminate 73 million jobs by 2030 in the United States alone. And that’s just from what is called rapid automation, or robotics. Another 40 million jobs will be lost to midpoint automation or AI software. An estimated one-third of the American workforce, likewise those in Germany, may have to learn new skills. Half of Japan’s workforce faces the same grim reality.

China and India could lose 236 and 120 million jobs respectively by 2030. Fast food providers and machine-operation businesses can expect to be hit the hardest.

There’s a good reason for this automation. Robots work tirelessly, require little maintenance, and thanks to artificial intelligence, can learn from their mistakes. They do not have to be fed and require no human rights.

To be even more specific, AI and robotics will be changing the face of six facets of our society in particular: Business and employment, environment, food & drink, health, relations, sports, and travel. 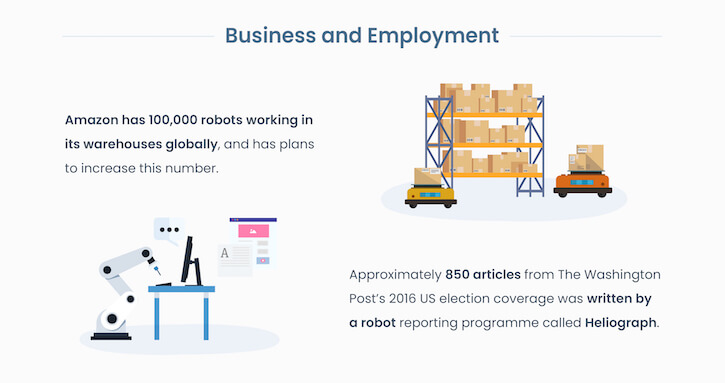 We’ve already taken a look at the effect of AI and robotics on job loss and displacement, but let’s take a closer look a the new jobs that technology will create. A new report by the Computing Technology Industry Association (CompTIA) indicates that, while the new jobs may not offset the losses of the old, there are impressive figures.

Retail giant Amazon reportedly has 100,000 robots doing various tasks at their warehouses and has plans to incorporate even more into its robotic workforce soon. A reporting program called Heliograph is credited with authoring over 850 articles from the Washington Post’s 2016 election coverage. These are lost jobs for humans, no matter how you look at it.

On the other side of the ledger, the emerging tech category saw more than 248,000 job postings in the first nine months of the year 2018, which represents an increase of 63% the same period of the previous year. AI job increased 149% from the previous year. A whopping 37,829 postings for AI jobs compare with 51,112 robotics jobs postings, an increase of 23%. Blockchain jobs posted a staggering 12,463 postings this year, an 423% increase. So while those hardest hit may not be able to take advantage of these jobs, the overall economy will find a better balance despite all that job loss and displacement.

And automation isn’t just for huge companies and conglomerates. More and more small businesses and even home businesses are using new workflow automation programs, such as PerfectForms, which saved on company $10,000 a year in printing costs alone and reduced time wasted in form processing by humans. 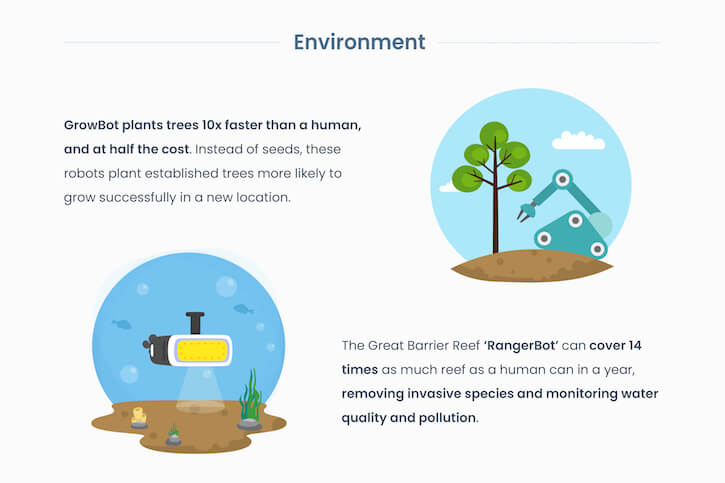 The environment is one of the fields that is benefiting most from AI. Robotics may have replaced a good number of the human agricultural workforce, as we’ve seen. Trees can be planted by the GrowBot at a rate ten times greater than a human labor force, and with a greater likelihood of a healthy and productive tree. The RangerBot monitors the Great Barrier Reef, removing invasive species and measuring pollution 14 times faster than its human counterparts.

And there are things AI can do for the environment that no human worker can feasibly do. Robo-bees are gearing up to do the crucial job of the simple honey bee, which pollinates 70% percent food crop species. New satellite imagery and soil testing programs help farmers better understand how to maximize the use and maintenance of their fields. So here, AI may giveth, but it does not taketh away. 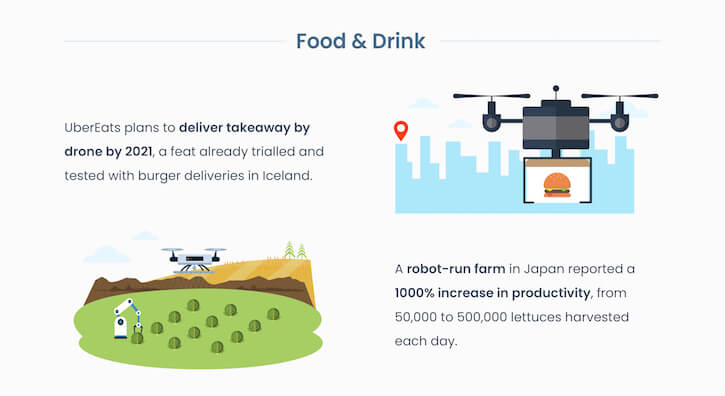 Many of the things in our society which are most affected by robotics and AI are closely related; the environment affects food and drink, which affects our health, which affects our relationships, etc. So it’s natural that a look at automation in the environment would lead us to a look at the same in food and drink. We’ve already seen how robotics increase production of packaged and fast foods, the true benefits happen at the agricultural stage, or even before!

AI can now discern the best combinations of soil, light, and water to create superior herbs and spices. It may not seem like much, but that can amount to more productive crops which generate millions more in revenue and reduced loss. A new algorithm Blue Yonder tracks variable elements, from weather to football fixtures, to predict how much of which foods will be in demand in a given place at a given time. This reduces waste and loss and makes more food available for other purposes. It also reduces the time human employees lose stocking and clearing unnecessary and ultimately wasted foods.

A farm in Japan reported a 1000% increase in productivity after becoming automated, increasing from 50,000 heads of lettuce daily to a staggering 500,000 per day.

And it’s not just food. IntelligentX is a London-based brewery that uses AI programs to perfect its recipes.

But whether you’re eating or drinking, we all need to monitor our diets. AI has given us all apps which analyze our eating and drinking habits and make recommendations. One app uses augmented reality to provide dietary advice for menus to help you make better and healthier choices.

So AI helps the consumer on virtually every level as regards food and drink, not a bad tradeoff for the loss of jobs robotics have created in that sector (as long as you’re not one of those workers).

And once again, neither AI nor robots can truly replace human beings: Robots may be able to construct fast food hamburgers, but they’ll never be able to replace a human chef, whose sense of taste and creativity are still far beyond the reach any computer or robot. As with any true art form, nothing can replace the human element. 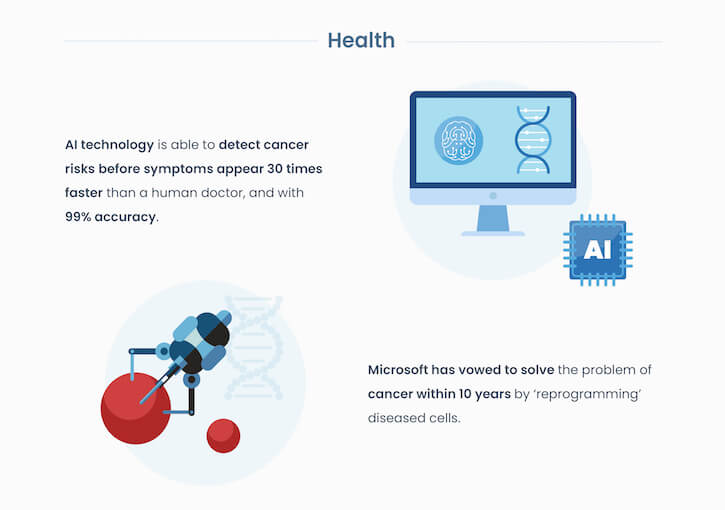 AI is having a stunning effect on the medical industry, especially on the doctor/patient level. AI technology now boasts a 99% accuracy rate and can now detect cancer risks before the appearance of any symptoms a full 30 times faster than a human doctor. Microsoft even believes it will soon be able to “reprogram” cancer cells, curing the dreaded disease once and for all, within ten years.

AI can have the advantage of humans almost across the board. Doctors are often overworked and overstressed, surgeons especially. Misdiagnoses and medical mishap account for millions of lost lives every year. But new apps us AI and deep learning to better diagnose symptoms and propose treatments. AI excels at reading radiology scans to find anomalies or potential problems. With new companies developing new medical industry tech, more jobs and more possibilities open up for people to implement those technologies. They’ll also help us all live longer, happier, healthier lives.

But while AI may be able to diagnose diseases, but it can never have human compassion or the famed “bedside manner” which is vital to good health service. Also in the medical field, while computer AI programs may excel in diagnosis, they will never have the intuition required for mental health diagnoses, which are becoming increasingly frequent. 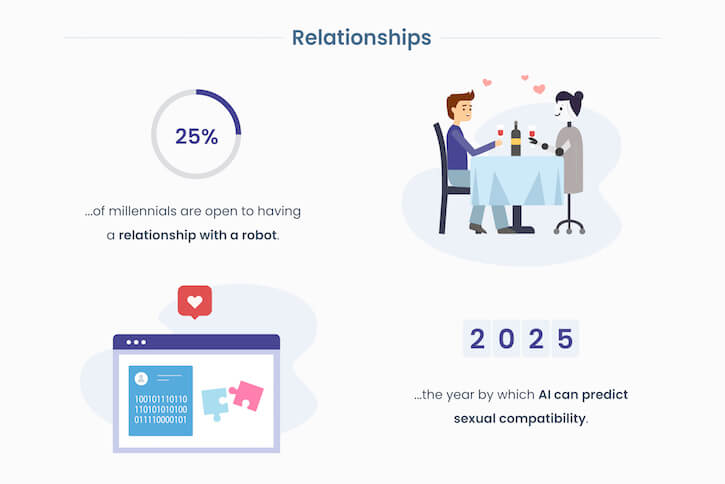 There’s no point in reviewing all the dating apps out there; Tinder, Elite Singles, Zoosk, take your pick. And most of them use data about your preferences to select recommended mates (this may be based on location, age, other data).

There’s also little point in reviewing all the pratfalls of using those sites and apps. They can be dangerous and are often misused by criminals or sexual predators. They are also rife with weirdos, liars, and con artists.

So for all the money these apps generate, and for all the millions of users they attract, love is one thing a computer just can’t accomplish. You’re as likely to meet the person of your dreams waiting for a bus as you are finding them through some AI computer search. And even if all the specifics of two people match up on a computer, that is no guarantee of a love match. There are human traits and factors and quirks and some experiences that no computer can take into account. And when you consider all the risks of those sites, this time humans clearly come out on top and always will. 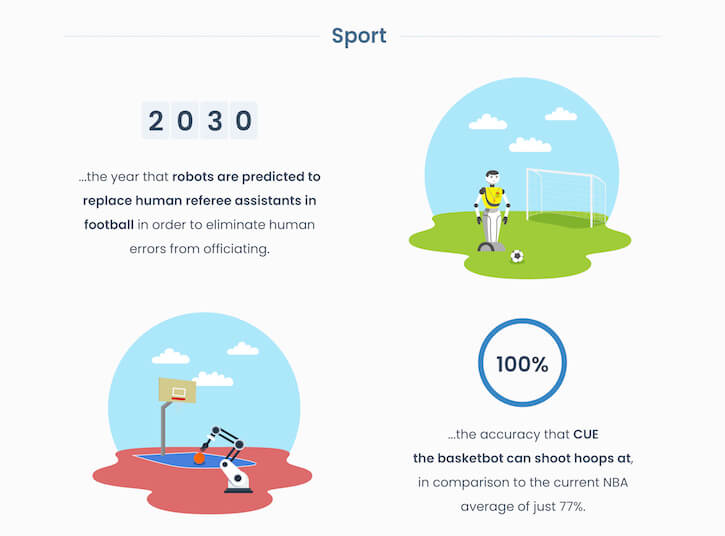 AI and robotics can’t do much on the field of honor. But new programs and specialized equipment makes for better training regiments and greater healthcare for sports of all types. The health benefits described above certainly contribute to the short-term and long-term benefit of the sports industries; healthier, better athletes make for better sporting events, and that makes for a stronger sports industry. 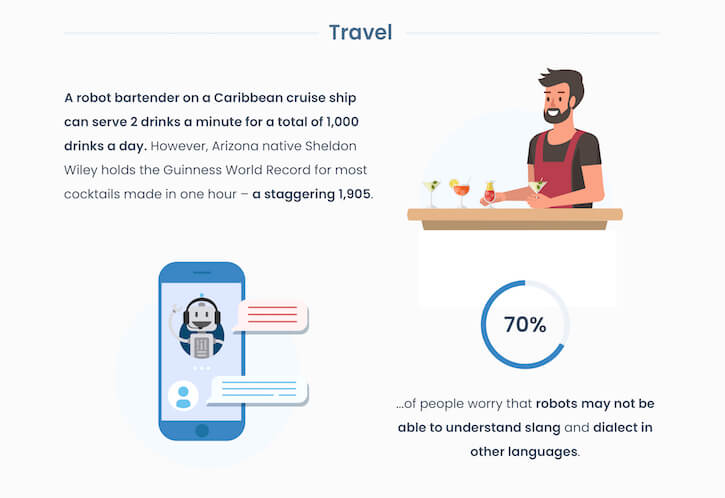 AI and robotics can have all manner of benefits for the travel industry. Robotics provides superior building, repair, and maintenance over their human counterparts, which could be bad news for aeronautical mechanics. But take a look at the stats: Maintenance problems contributed to 42% of fatal U.S. airline accidents between 1994 to 2004, (excluding the 9/11 terrorist attacks). Roughly 12% of all airplane crashes report maintenance as a factor. Human mechanics often suffer from stress, fatigue, time constraints, lack of motivation, poor skills, and misperception of hazards.

Major airlines already use autopilot and other computer tech and have for years. They can malfunction, of course, but statistically many more planes land safely than do not, and virtually all of them are flown almost entirely by computer.

So as it relates to travel, AI and robotics have it all over their human counterparts. And one really does have to prioritize human lives over jobs.

So while the face of the workforce is certainly changing, and that face is becoming increasingly less human, there is still hope for Earth’s dominant species.

How Machine Learning is Helping Businesses, Understand and Engage Their Customers Better Than Ever

Isadore H. May Highlights the Importance of Networking When Job Hunting

Gain Traffic to Your Site with SEO: A Guide for Businesses in Prague

You may have tried some methods out there to attract visitors to your site, but nothing

10 Most Promising Esports Start-Ups in Europe

The organized multiplayer video game tournament or competition known as esports has come to stay, and

How Technology Is Only Limited By Broadband Speeds

In the modern-day, it’s no secret that everyone is striving to have fast broadband speeds within

The Best Selling Phones of 2019 Reviewed

2019 was an incredible year for mobile phones, with the launch of groundbreaking new models from

Pros and Cons of Android Vs. Apple

A few years ago, you could have iOS releasing their app, and Android users would have