I am in the middle of reading Michael Pollan’s The Omnivore’s Dilemma. So much of what he revealed when the book first came out ten years ago has become common knowledge to the sustainable and local food movement, so most of what I read came as no surprise. For example, organic is known to be little more than a label, and frequently organically raised animals are just as unhappy as their conventional counterparts. And of course, it is no surprise to learn that organic and natural vegetable, fruit and coffee suppliers are just as massive, monocultural, and industrialized as their conventional counterparts, and are in many cases owned and run by conventional mega-farms.

No, none of this is surprising. But every time I read about the state of the American (and the pattern is growing into worldwide) food system, my heart breaks all over again. Choosing to opt out seems like a constant uphill battle, which is stupid because all I want is to eat vegetables grown in healthy soil and animals that didn’t spend their whole lives suffering. That doesn’t seem like such a crazy wish!

The first time I started to get an inkling of what was going on was through the wonderful blog. As the name implies, the blog is very revolutionary and maintains that we can’t rely on our government to look after our interests when it comes to food. At the time, I thought I was doing pretty well buying organic whatever possible including even organic coffee beans when I could, but I didn’t really understand the nuances. Food Renegade pushed me to start trying to figure out where my food comes from and to insist on a deeper understanding of how food is made.

Time spent on the original Farm to Table gave me a better idea of the local food movement and its motivations and goals. A friend living in a yurt with her own goats taught me just how complex all the relationships between food, politics, health, and economics can be, and she also recommended Sally Fallon’s Nourishing Traditions. An issue of Mother Earth News brought me to tears with its descriptions of heirloom goat breeds and sustainable heating solutions for your home.

And now, reading The Omnivore’s Dilemma, I find myself distraught again. Partly, I am frustrated that there even has to be a book (an entire genre, actually) about what to eat, how to eat, who to trust, and the evils of industrial agriculture.

It frustrates me that, to survive this system, you have to know what you’re doing and get into the intricacies of how food is grown and distributed; you can’t rely on others to have your interests at heart. My sister is a vegan, my father loves his specially formulated sports supplements, and my mom just wants to balance the budget and sees no difference between farmers markets tomatoes and supermarket ones, except that heirloom tomatoes are oddly shaped. Our dinner conversations usually center around dinner itself, which is frequently different for everyone. We discuss what’s healthier, what’s more ethical, what’s practical, what’s sustainable ad nauseam.

Sometimes, I just wish we didn’t have to worry about all this. But if we don’t put up a fight, we end up with conventionally-raised steaks, pre-made frozen pizzas, and pasteurized milk to wash it all down. We have to argue.

And that’s just in the family. It’s worse with strangers.

It all comes down to health: my own, the community’s, and the environment’s. I want to be healthy without being a burden to the local ecosystem. And the government, with lots of encouragement and implicit agreement from corporations and society at large, has set up the system to make it very, very hard to be healthy. The government has made it nearly impossible to be sustainable as well. 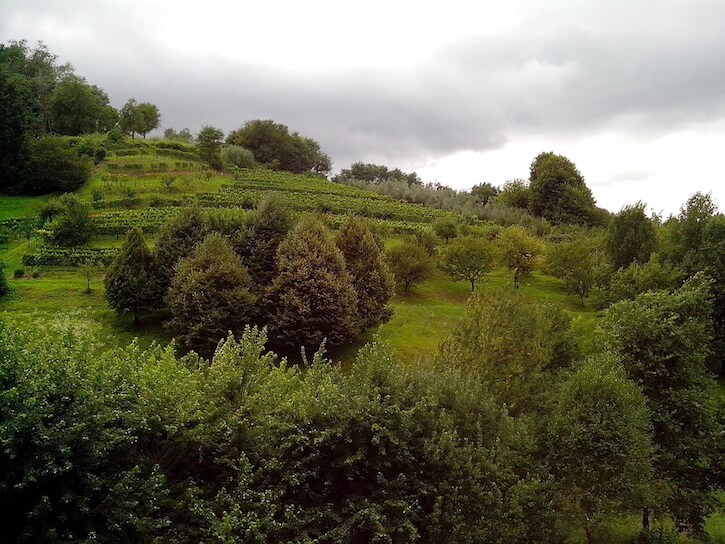 The Comforting Lies of Industrial Agriculture

At Farm to Table, we are all about local food, small farms, and sustainability. But there is a belief “perpetuated by the USDA and agribusiness” that ours is a food system that can only feed the privileged few. Ignoring my opinions on overpopulation, I figured that we would just do the best we could, feeding as many as we can and filling the gaps with industrial agriculture.

And then I found out it was only cheaper to raise cattle in CAFOs because the government subsidized corn. Otherwise, it would be cheaper and easier to raise them on grass. Can you imagine every steak in the supermarket being grass-fed? And I found out that small farms actually produce more per acre than monoculture farms. The problem is with the distribution system of a society that prefers massive, centralized supermarkets.

The US does everything the hard way, and it’s killing us and the environment. And yet, instead of acknowledging this, we ignore it and make up more problems to fix the problems we’ve created.

The really disheartening thing is that people get offended when you tell them all this. How dare we challenge the USDA? Hasn’t it done us (and all the world’s hungry) a great favor by making food so cheap? How can we be so picky and ungrateful for our $1.99 burgers when so many other countries spend 50% of their income on food? We’d better stop complaining or give up our nice cars and consumer electronics. We are entitled to cheap food, no matter what the costs!

That is the tragedy of industrial agriculture; that society would rather be willfully ignorant instead of making difficult choices about what to eat and where to buy it. The fact that these choices have to be difficult is itself a problem; it shouldn’t be a struggle to find food that isn’t poisonous.

So what can we do?

Share your garden’s produce. Support local farmers, so that others see it as a rewarding life calling. Maintain your standards in the face of convenience and cost. Be that ridiculous person who leaves their fridge empty until the next farmers’ market, instead of just hopping down to the supermarket. Educate when people ask (but don’t push it on others).

I always feel a lot like what we are doing is opting out of the current food system. We are making the inconvenient choice to do our own thing, which really shouldn’t be so offensive to society at large. We are choosing to know where our food comes from, to question the benevolence of a company that pre-packages everything and sells it to us at a ridiculously low cost. We are choosing not to accept the temptation of convenience and price.

People want to trust their food because they are eating it after all, and that is where we can find a glimmer of hope. When they find proof that their trust has been abused, people tend to get really worked up.

Of course, most people will just switch to the organic brand of whatever processed boxed cereal they’ve been eating and try really hard not to have their eyes opened again.

Change comes slowly, for the market as well as the individual. I don’t know if American society can really alter its centralized supermarket model or its love of cheap food, but I’d like to see opting out become a feasible option for more people. People should be able to feed themselves, even if only partially.

All I wanted was to have a bit of land to myself where I could raise goats, have a small garden, and a lot of sunshine. I just wanted to be left to take care of myself, my family, and my community. It is indicative of the total acceptance of the industrial model and the mindset of agribusiness that my dad tried to convince me it was a bad idea, that it was impossible, too difficult, that I would be wasting my time. To him, and to most Americans, even those who were a part of the original organic counterculture, industrial agriculture has become unassailable. He thought he was doing me a favor by discouraging me from homesteading, which is exactly what agribusiness wants.

We are learning, all over again, that we were right the first time we questioned that assumption that we shouldn’t take care of ourselves and can’t feed ourselves sustainably. Let’s not give up so easily this time.

Nick Cooney Evaluates the State of the Alternative Protein Industry

How To Live A Healthy Lifestyle In 4 Simple Ways

Top 15 Healthiest Foods to Have in Your Kitchen

Nick Cooney Evaluates the State of the Alternative Protein Industry

How To Live A Healthy Lifestyle In 4 Simple Ways