The liberal use of bright primary colors immediately lets you know that have left the grayish surroundings of Malá Strana behind and entered an Alice in Wonderland–style alternative reality. Tables and chairs are mounted on the ceiling, three giant bells hang in the front window. The front dining room is designed to look like a street, with the walls dressed up as the sides of village houses and multicolored wooden benches at the tables. A trompe l’oeil painting on the wall just beyond the doorway suggests a cobblestone lane. It is not unlike something Wile E. Coyote would draw to try to trap the Road Runner.

Further rooms have different styles, some sporting paintings by Ana Petrović Siljkovic, whose work is a bit reminiscent of Diego Rivera. Just beyond the winter garden and on the way to the now-closed summer garden there are some live parrots who are a bit wary of strangers. The various spaces make it easy to get some privacy with your friends, and the eclectic bric-a-brac gives your eyes a place to rest without staring at other patrons.

Everywhere you look there is something, but the overall effect is pleasantly welcoming, like your grandparents’ backyard that they always plan to organize but never will.

The food is also not what you get in the rest of Malá Strana, which tends toward overpriced tourist traps. Luka Lu offers a wide range of Balkan specialties and wines, with a good selection of grilled meats as well as seafood.

For starters we had proja, corn bread with sour cream and Balkan cheese (85 Kč). It was warm and helped to take the chill off the autumn day. The corn was much more finely ground than the kind one gets in American corn bread, and the sour cream was an interesting change from butter.

The homemade bread with brynza cheese (35 Kč), listed as “couvert” on the menu, is also served warm and dies the same trick. The roasted peppers stuffed with cheese (155 Kč), listed as a starter, in itself would make a quick lunch. But Luka Lu is a place to sit and relax.

Next we tried mussels buzara (195 Kč), in a further attempt to chase away the autumn chill. This dish was like a soup, with mussels in half-shells covered in broth made of wine, garlic and basil. Coaxing the flesh out of the shells took some doing, but once that was accomplished, they went well with the broth, which wasn’t too overpowered with garlic. The mussels fresh and apparently imported from New Zealand.

Having cracked into seafood, we continued with calamari roasted on a grill (275 Kč). This is another dish that is a bit tricky to prepare, and can be quite rubbery. Roasting helped to firm it up a lot and make it easy to cut. Lemon on the side helped to bring out the flavor, and side dish of grilled vegetables, mostly peppers, added some color. The tentacles were quite large and served in their entirety; it is not a meal for the squeamish.

My companion opted for some of grilled meats, a traditional Balkan specialty. They have quite a few choices ranging from lamb sausages to duck. Pljeskavice, minced meat stuffed with cheese (235 Kč) was a standout. Although the duck, which we didn’t try, might require a second visit.

Balkan desserts are on the sweet and sticky side. The baklava (95 Kč) was not as flaky as the Greek kind, which can be hard to tackle, and not as dripping in syrup as similar Turkish desserts. It seemed a happy compromise. Tufahija (95 Kč), a cooked apple filled with nuts, was a bit lighter overall.

To accompany the meal we had red and white wines from Bosnia, which were about 400 Kč each. The restaurant has a large selection of Balkan wines, which a are good value as they tend to be high-quality and have not yet been discovered by wine connoisseurs. The red wine, called Tvrdoš and coming from an Orthodox monastery, was hearty and full-bodied.

Overall, Luka Lu is a fine place to relax with friends and share some food. Many of the dishes, especially the grilled meats, are quite suited to splitting up among a large party. The back rooms especially are a place where you can forget about time and the outside world. 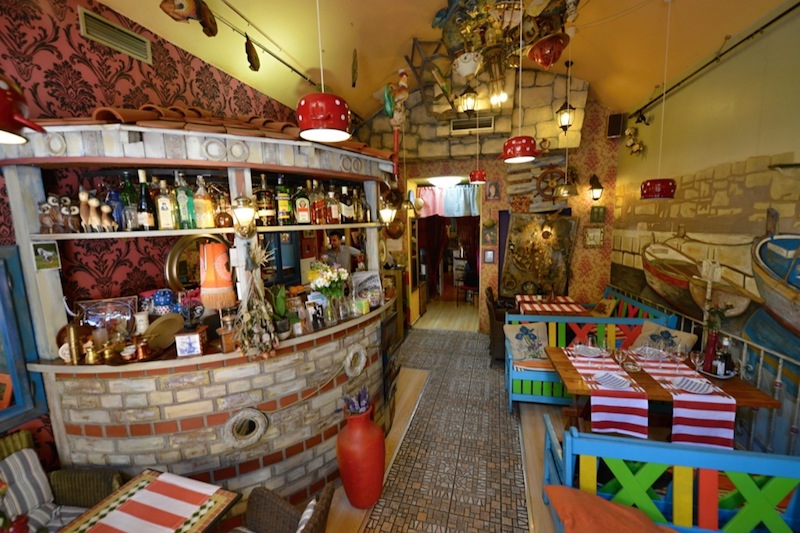 From the street, Luka Lu looks deceptively small. The somewhat busy front, with potted plants and bicycle, hints at a mazelike interior that is crammed from floor to ceiling with decorations. The owners are from the Balkans, and have brought as much of their homeland as they could manage to fit into the venue’s several rooms.