An the open-source, 3D-printed robot is set to inspire innovation in classrooms

Meet Poppy, the first completely open-source, 3D printed, humanoid robot (@poppy_project). Poppy is a robot that anybody can build and program. That means it’s not just a tool for scientists and engineers: the team of developers aims to make it part of vocational training in schools, giving students the opportunity to experiment.

Poppy was developed in France by Inria’s Flowers team, which creates computer and robotic models as tools for understanding developmental processes in humans. Dr Pierre-Yves Oudeyer, who holds an ERC Starting Grant in Computer Science and Informatics, explains: “Very little has been done to explore the benefits of 3D printing and its interaction with computer science in classrooms. With our Poppy platform, we are now offering schools and teachers a way to cultivate the creativity of students studying in areas such as mechanics, computer science, electronics and 3D printing.”

Build your own robot

Poppy’s body is 3D printed and its behavior controlled by freely available software, meaning users can design body parts quickly and easily, and program their robot’s behavior themselves. Dr Oudeyer clarifies: “Both hardware and software are open source. There is not one single Poppy humanoid robot but as many as there are users. This makes it very attractive as it has grown from a purely technological tool to a real social platform.”

Accessible, open-source hardware and software make it easy for users to experiment with building their own robots for the first time. Poppy is now also compatible with the Arduino platform, which allows the robot to interface with other electronic devices, including smart clothing, lights, sensors and musical instruments. 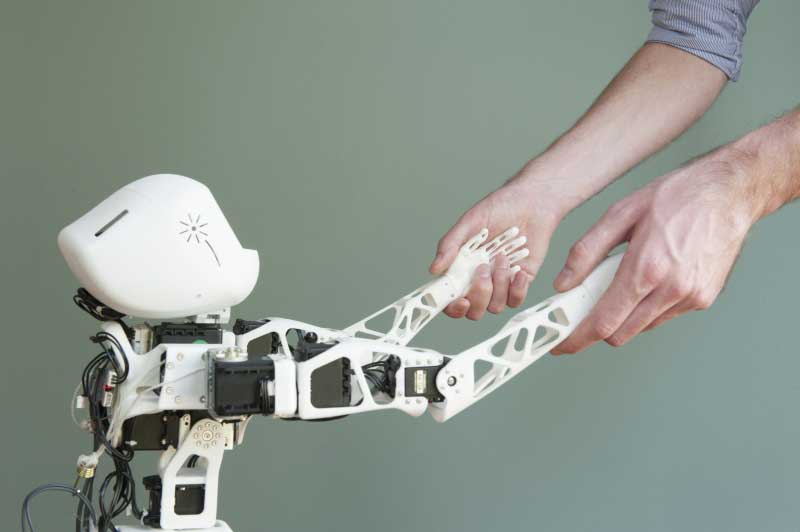 Do It Yourself in schools

Dr Oudeyer plans to extend use of this technology beyond research labs, to the educational sector in particular. Commenting on the Poppy initiative, EU Commissioner for Research, Innovation and Science Máire Geoghegan-Quinn said: “This is a great offshoot of an ERC project: a low-cost platform that could foster a more interactive and inspiring learning environment, allowing students to connect with research and design.”

The Poppy platform has come about thanks to the ERC-funded “Explorers” project, in which Dr Oudeyer studies the mechanisms of learning and development using robots. “Our hypothesis is that the body is an essential variable in the acquisition of motor and social skills in humans. To study this theory, we needed to create a platform allowing fast experimentation of new robot morphologies. This led to the Poppy platform”.

Thanks to his ERC funding, Dr Oudeyer was able to develop problem-solving and critical thinking ability in robotics. He hopes students of computer science, coding and design will be able to train using Poppy and perhaps, later, find a job in the robotics sector. The “Explorers” project, worth €1.5 million, runs until 2015.

Poppy will also allow users to share their ideas and results in a very open and collaborative way through a dedicated web platform – gathering people across the frontiers of school, art, science and industry. Dr Oudeyer’s team has already used Poppy in other fields, including the arts. In an ongoing artist residence program entitled “Etres et Numériques”, the team worked with a dancer and a visual artist to explore the emotions and perceptions of body gestures and movements using the robot (see more here). They expect to extend these experiments to other artistic performances.

Set up in 2007 by the EU, the European Research Council (ERC) is the first pan-European funding organization for frontier research. It aims to stimulate scientific excellence in Europe by encouraging competition for funding between the very best, creative researchers of any nationality and age. The ERC also strives to attract top researchers from anywhere in the world to come to Europe. Under the new EU research and innovation program Horizon 2020, the ERC has a substantially increased budget of over €13 billion.

For more information on the project go to http://www.poppy-project.org/

Five Tips to Grow and Boost Your Medical Career

The medical profession is one that has evolved immensely over the years. Medical practices grow increasingly

“PantaRhei – Life is flux.” – Heraclitus of Ephesus COVID-19 continues to rampage its way throughout

Technologies Are Here to Help: 7 Recent Advancements in College Education

It’s almost impossible to imagine modern education without smart assistants. There are various applications and programs,

Should You Be Going to Grad School?

Even in a world where technology seems to be constantly producing new employment opportunities, competition for

Top 8 Universities in the World by Graduate Employment Rate

There is a lot of speculation that a college degree doesn’t guarantee a successful career. Although