On the 28th Anniversary of the Velvet Revolution, the Banned Workers’ Party Takes to the Streets

This past Friday, November 17th, marked the 28th anniversary of the 1989 Velvet Revolution, the peoples’ peaceful uprising that had brought 40 years of Communist totalitarianism to an end. Many commemorated the event by taking to the streets, exercising their democratic freedoms gained less than 3 decades ago.

In homage to the students who initiated the revolution with their march down Národní třída in ’89, Friday’s marchers chose a similar route through the center of Prague.

Amongst the demonstrators was the extremist far-right Workers’ Party, whose protest began at approximately 3pm near Müstek Station by Wenceslas Square and forged in the direction of Republic Square.

“They are showing their opinion about the current political situation, which is indeed their right,” explained Police Officer #283471 of the Prague Antikonfliktni Team. “They fear the restriction of freedoms, so they are here to exercise theirs.”

The officer was one of the dozens who arrived at the scene as the protest progressed, accruing participants along the way. 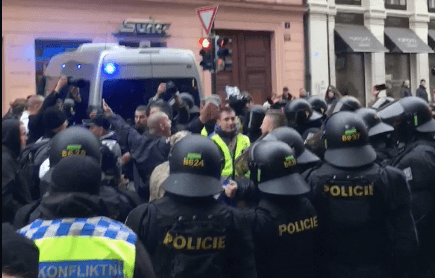 “They do have the right to assemble unannounced if there were only a couple of them who wouldn’t disturb city traffic,” the officer said. “But given the size of this gathering, they are required to inform the City Magistrate of the location, time, and approximate size of the march, all of which they failed to do.”

The Czech Constitution does, in fact, grant people both the freedoms of speech and assembly, with several vital limitations. The law prohibits speech that incites hatred based on religion, class, and nationality, and bestows the government with legal authority to forbid gatherings, including marches and demonstrations, if they promote hatred or intolerance, advocate suppressing individual rights or jeopardize the safety of participants.

Throughout Friday, nine registered marches passed peacefully through Prague without interference by city law enforcement. The heightened police presence at the unregistered Workers’ Party march was also due in part to their longstanding record of demonstrations turned violent.

Since the 1989 separation of Czechoslovakia into two discrete nations, the Czech Republic and Slovakia, the Workers’ Party is the only group to be officially banned by the Czech government.

The party was founded in 2003, touting a radically anti-Communist agenda. Members railed against the Czech Political system, claiming that it is too liberal and maintains ties with communists. Its program also stood firmly against Czech membership in both NATO and the European Union. While the party never gained representation in any legislative body, the group’s inflammatory language and riotous behavior have repeatedly drawn widespread media attention.

On February 17th 2010, the Czech Supreme Administrative Court ruled to outlaw the group in response to members’ violence against minorities and their racist, xenophobic, and anti-Semitic rhetoric. The court claimed the party’s program “violate[d] human rights guaranteed by the constitution.”

Though the verdict raised controversy over the restriction of free speech in a democratic society, political analyst Miroslav Mareš told Czech Radio in February 2010, that the court’s decision set an important precedent for behavior the Czech government would deem detrimental and ultimately intolerable.

“It’s very important for the future of the political culture here in the Czech Republic. It will set the boundaries for the political activities of extremist parties. It provides a clear distinction on what is acceptable and what is against the law, which is mostly the acts of violence but also the xenophobic rhetoric and the racist and anti-Semitic statements of the party members,” he said.

Now in place for 7 years, the ban still generated discord at Friday’s march. During a stand-off with law enforcement near Republic Square, party members chanted: “Is this not a democracy?”

The court’s 2010 decision, however, aimed precisely to protect peoples’ freedoms, rather than to encroach upon them. Still, the issue raised at Friday’s march mirrors the pervasive discourse surrounding free speech and its ethical limits in many democratic societies today. The question remains highly contentious; what are the limits of the government’s authority in a free speech society?

Olivia Nemec is the independent Prague/Czechia reporter for Praguepost.com and can be reached at olivia@praguepost.com