For the second 1787 stay in Prague, Mozart and his wife Constanze are thought to have stayed at the House of the Three Golden Lions in the Old Town’s Coal Market, Uhelny Trh. It is even possible that they stayed at this same address at some point during their first visit to Prague. Whilst Mozart’s letters from Prague indicate that he stayed at the town palace of Count Thun in the Lesser Quarter, he does not specify whether he and Constanze moved on afterwards elsewhere. Today a plaque at the House of the Three Golden Lions records that Mozart stayed there in 1787 but is perhaps consciously ambiguous about which of the two visits is meant. It reads in gilded letters: ‘V Tomto Dome Bydlel Mozart V Roce 1787′ [‘Mozart lived in this house in 1787’]. A medallion bust of Mozart in profile may be seen above the main doorway. The restaurant U Tri Zlatych Lvu [‘At The Three Golden Lions’] occupies part of the ground floor. 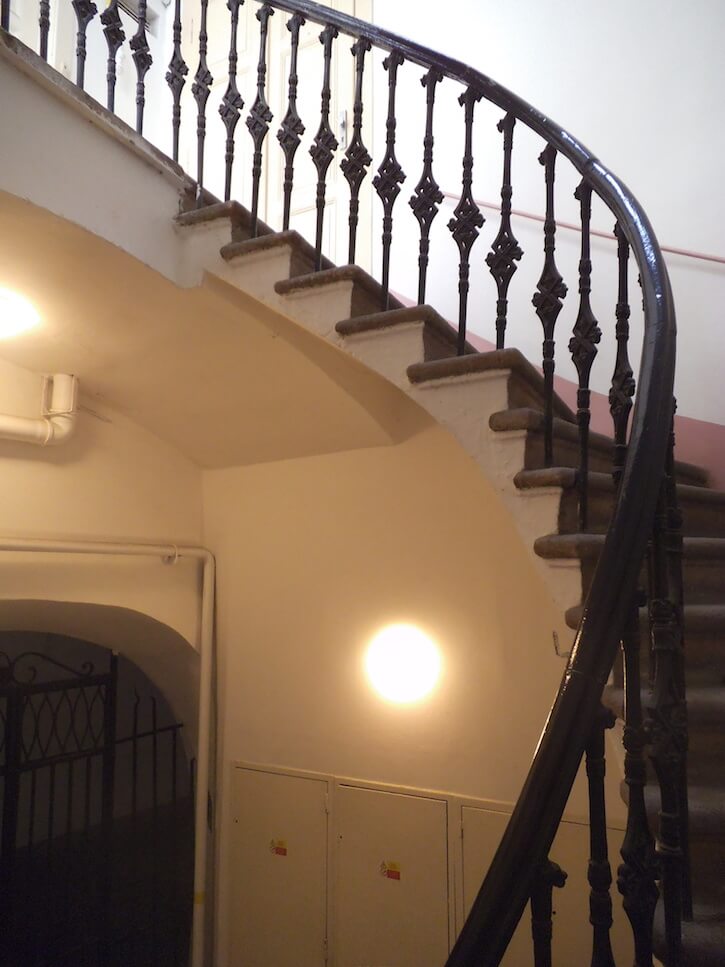 The local Prague story of Mozart’s communication by the open window across the street with his librettist, Lorenzo Da Ponte – who was also staying on the Coal Market – is the kind of charming tradition that a simple study of the square makes possible. But it could also be the kind of vocal hand-me-down which just underpinned their musical collaboration through architecture.

Subtle allusions to Mozart’s stay in 1787 are much in evidence aside from the wall memorials. The adjoining hair studio is called ‘Amadeus’, and the top floor of the House of the Three Golden Lions is rented out as accommodation, fittingly named Apartment Amadeus. The owner confirms the tradition with the Don Giovanni stay by stating in the information about the property that ‘Wolfgang Amadeus Mozart… stayed here at the same building (just one floor below our apartment) in October 1787 at the time of the first performance of his…most famous opera “Don Giovanni” at the Estate Theatre.’ On the floor below is also a further apartment, maintained by the company Prague Residences – the ‘Mozart Historic Apartment’.

The Prague City Archives confirmed to the present author that there is no surviving documentation about the house prior to 1813 – sadly, some twenty-six years after Don Giovanni’s premiere. Archival floor plans of the property are no older than 1852. Indeed, all evidence appears to confirm that Mozart stayed here in 1787 (Volkmar Braunbehrens, Mozart: Lebensbilder, 161).

A stay in the ‘Mozart Historic Apartment’ seemed to the present author a way to gain a yet more in-depth understanding of Don Giovanni if in the House of the Three Golden Lions Mozart masterminded at least in part, the vast mental processes of the opera’s completion. It also seemed a choice opportunity to gain insight into Mozart’s domestic arrangements, given the fact that so many of the surviving buildings in which he either lived or stayed outside Salzburg are now in private ownership.

The stories of Mozart playing on the organ at Prague’s Strahov Monastery on the day of the opera’s premiere, as well as his completing Don Giovanni at the Duschek villa of Betramka, are details no longer possible to confirm and are themselves now part of worthy Prague legend. Both the House of the Three Golden Lions and Betramka vie for the honour of the opera’s completion at their respective addresses. Still, the truth of either claim is now impossible to establish on sound evidence. Prague’s official tourist website Prague.eu supports the theory that it was at Betramka that Mozart completed the opera (https://www.prague.eu/en/object/places/159/bertramka-museum-of-w-a-mozart-and-the-dusek-family, Retrieved 06/11/2019).

The Duscheks purchased Betramka in 1784. Mozart may well have stayed at the Duschek villa when in Prague for the Don Giovanni premiere, but the actual evidence for this is at best fragmentary. Given the strong connection with the Duscheks, it seems highly possible that Mozart visited them during the second stay. Indeed, he would appear to have composed the scena for soprano K528Bella mia fiamma – Resta, o cara for Josepha Duschek during this exact period (ed. Cliff Eisen, Mozart: A Life in Letters, xxv).

Betramka is located in the Smichov district of Prague. Visited in 2018 by the present author, the gates were firmly closed, and graffiti was scrawled across one of the outer walls. A cellar window was left open, and the area suggested bats. Putting the camera through a darkened outer lattice revealed a wooden floorboard with a light fixture resting upon it. The lovely garden had a neglected yet romantic quality that still had the power to conjure up the graceful spirit of Mozart. Happily, restoration work now seems to be underway. According to Betramka.eu, Betramka may reopen in 2020. The website shows an encouraging image of the repaired outer staircase, photographed in June 2019 (http://www.bertramka.eu/, Retrieved, 06/11/2019).

Another image that appears to support the visit/stay at Betramka is a coloured silhouette artwork entitled ‘Mozart im Hause Duschek’ [‘Mozart at the Duschek House’] which shows Mozart sat at a clavichord, most probably at the villa. Perhaps the coloured silhouette artwork was even supposed to represent an actual room at Betramka. Fascinatingly, the chair on which Mozart is sat has pink silk upholstery.* It was in the Betramka collection and seemed to have been part of the tableau made to commemorate the premiere of Don Giovanni. (https://www.akg-images.de/archive/-2UMDHURXE6O.html, Retrieved, 06/11/2019).

Family members of the present author visited the Betramka villa in 1971. At this time there were contemporary chairs upholstered in pink silk*, a clavichord and porcelain chandelier. On display was a reproduction of the famous engraving of Lorenzo Da Ponte by Michele Pekinino after Nathaniel Rogers. Later interior photographs of Betramka show portraits, a porcelain stove and a painted ceiling with stalks of leaves and fruit (Braunbehrens, pp. 187-189). In the beautiful grounds stood a bust of Mozart by Thomas Seidan, sculpted in 1874 (Ibid, 207). According to Prague.eu, the original furniture was returned to the villa as part of the transformation of the building into a Mozart museum, whose new exhibition opened on 1 December 2000. The villa’s sala terrena contained original paintings from 1700-1780. The same site claims that Mozart ‘occupied‘ two of the seven rooms on the residential floor but did not elaborate on its sources: (https://www.prague.eu/en/object/places/159/bertramka-museum-of-w-a-mozart-and-the-dusek-family, Retrieved 06/11/2019).

Mozart incredibly seems to have found time to compose after the premiere. Perhaps the sheer drive to compose remained so strong even when the pressure eased. Mozart then wrote what became known as ‘Das Traumbild’, [‘The Dream Picture’] K530. The song was dated Prague 6 November 1787, so perhaps also written in the House of the Three Golden Lions. Mozart had written to his friend Gottfried von Jacquin a letter dated two days earlier from Prague, to relate the success of Don Giovanni – finally staged on 29 October 1787 – which had met in his own words with ‘the most tremendous acclaim’ and was repeated on 3 November as he wrote ‘for the 4th time – for my benefit’.

Unsurprisingly, Mozart does not describe his accommodation on the second Prague visit, something we must assign to both habit and intense creative pressure. But if Don Giovanni was worked on in this very building – which seems likely – it lends this fine but unremarkable building a prized and precious quality. The extraordinary status that the opera enjoys in the annals of musical history could make it into something of a hallowed space. For Mozart of course, however, the building had a purely practical function. 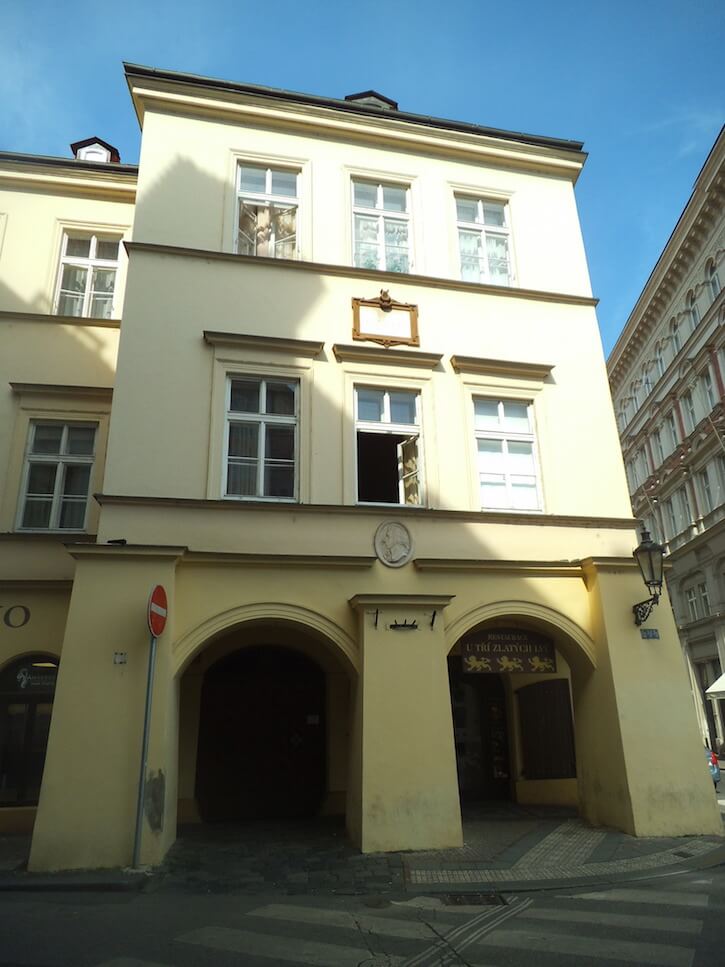 The heavy wooden outer door leads to an inner courtyard and an iron grille. Behind the grille lies a delicately worked iron staircase, with what one supposes must be the original stone steps. This kind of experience enables the interested visitor to reimagine the living moments of a historic person’s comings-and-goings and gives a privileged insight into their human routines.

It is arresting to imagine Mozart hurrying up and down these stairs and returning on an evening in October 1787, with the music of his dark Prague opera very much in his head. Standing on this staircase, one gets a very real sense of both Mozart and Don Giovanni. It has been suggested that Mozart’s main apartment was located at the top of the stone staircase, whose windows would have overlooked the square. The present author stayed in the adjoining apartment on the first floor. In the absence of 1780s floor plans, Mozart’s apartment may have had different divisions to the modern-day layout.

The Mozart Historic Apartment consists of some four rooms and a hallway and is situated around an inner balustrade alongside other first floor apartments. The minimalist interior includes fine touches such as prints of the best-known posthumous portrait by Barbara Krafft and the Verona portrait by Saverio Della Rosa. An antiquated record player in the corner of the room was supplied with an old vinyl recording of Mozart’s Symphony in D K504, the ‘Prague’.

Visceral experiences such as these allow time to fall away temporarily. The noise from the streets would have been as much present in the 1780s as now and whilst different, the sounds of voices and the occasional tourist fiacre enable the past to be thus recreated. The sounds of neighbours returning home, turning keys and shutting doors allow the visitor to imagine a tired Mozart returning home after the success of his opera’s premiere at the end of the road. Playing K504 ‘Prague’ lets the listener recall that it was written by the composer who perhaps occupied the adjoining apartment.

Mozart and the Palais Pachtuv in Prague