Oral tradition acquires in time, of course, its significant historical value, however little actual evidence exists to corroborate it. Such traditions weave themselves like threads into part of a much richer tapestry, a cultural hand-me-down over the centuries. Oral tradition can of course, also be the only way of ‘recording’ something at the time, so that it is not forgotten. Over time, however, this often means that it becomes harder to separate history from fiction, aside from the fact that truth is regularly embroidered or loses content. We must also acknowledge that individual memory itself works by selection and is inconsistent.

My quest to discover some of the hidden stories of Mozart in Prague has revealed rare and privileged insights into his possible movements in the city, stories which can probably never be fully authenticated but can also therefore never be dismissed. Researching these stories has taken me into hotels, inns, pubs, churches, theatres and finally the British Embassy in Prague – all places Mozart may or may not have been, when not at his music. 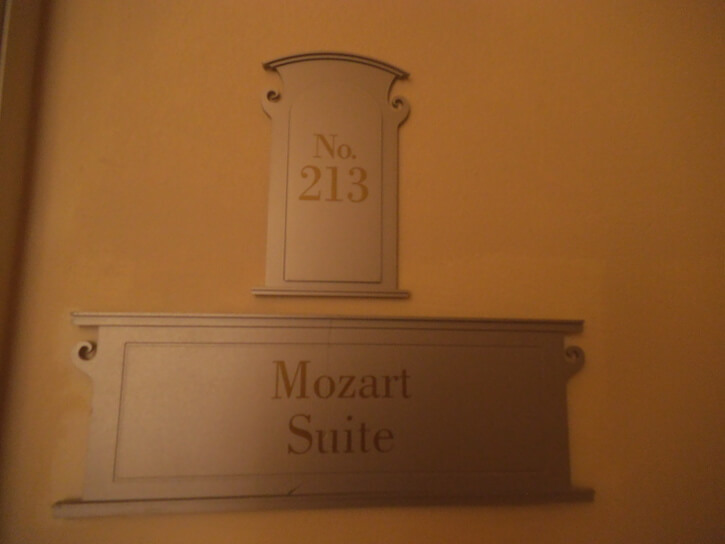 Most recently, in Prague, I endeavored to research the connection between Mozart and the Pactuv Palace, today the Smetana Hotel. This, like all the other stories, must have started somewhere and because these have been handed down in Prague tradition, they are now treated as the truth. Even if research were able to prove the inaccuracy of any one of these, the traditions would still be repeated. As such, we must reverently respect them as having now become part of Prague folklore; the historian must respect the cultural value of what may not be accurate.

Mozart mentions ‘visiting’ “Pachta,” during his fleeting stay in Prague in 1789, in a letter to his wife, Constanze. “Pachta” probably referred to Major General Johann Joseph Philipp Pachta von Rayhofen (c. 1723-1822), an aristocrat who, according to the Oesterreichisches Musiklexikon, maintained a private chapel in Prague, the musicians of which included the hornist Jan Zaluzan, the fagottist Gabriel Rausch and the clarinetist Vaclav Farnik. His music collection is partly housed in the Prague National Museum, which contains among others, works by Joseph Haydn (Christian Fastl, Art. „Pachta von Rayhofen (Rájow, Rájov, Reihofen), Familie,‟ in Oesterreichisches Musiklexikon online, Zugriff: 18.6.2019 (https://www.musiklexikon.ac.at/ml/musik_P/Pachta_Familie.xml).

Music was part of Pachta von Rayhofen’s family nobility, as well as being the personal interest of a man of sophisticated taste. Karl, the brother of his nephew Johann Josef, was a music enthusiast, whose wife Maria, Countess Kaager von Stampach, was noted in 1796 for her pianistic talents. “Pachta” may perhaps also refer to the nephew of “Pachta,” Johann Josef (1755/56-1834), at the Palais Pactuv or Pactuv Palace on the Annaplatz, which was known for its importance. Here you might take the city’s musical pulse, the great blood of the city’s cultural life, pumping through Prague’s body. Together with his wife, Josephine Countess von Canal Malabayla, the palace would surely have included Mozart amongst its visitors. Like his uncle, Johann Josef was a Freemason, as would, of course, Mozart himself become, from 1784 when he was first admitted as an apprentice at the Masonic lodge Zur Wohltätigkeit [The Beneficence].

Mozart wrote to Constanze from Prague on 10 April (Good Friday) 1789: ‘I drove off to see Canal and Pachta, but they weren’t at home – and so I went to Guardasoni’s…’ Domenico Guardasoni had arranged for Mozart to be paid 200 ducats for an opera commission, which in the end never materialized (ed. Cliff Eisen, Wolfgang Amadeus Mozart: A Life in Letters, 537). It tells us then, that although Mozart ‘visited’ Pachta, he was not at home. Mozart, however, was on the move, and the visit of 1789 was concise. Probably then, the visit to Pachta was at the Palais Pachtuv, yet a tradition is maintained that one occasion at least – earlier or later than 1789 – Mozart stayed on a longer, proper visit and wrote music there.

He had arrived in the city on 10 April 1789 – the date of his letter – and wrote that they were leaving at 9 o’clock for Dresden ‘where we’ll arrive tomorrow evening.’ ‘Canal’ referred to Joseph Emanuel Canal, Count of Malabayla, related to the Pachtuv noble family through Johann Josef’s wife, Countess Josephine. This brief sentence in the letter tells us a great deal about Mozart in Prague, as on such a short visit, he wanted to visit these two important acquaintances, as well as hoping to call on the Duscheks, all part of his closest circle of friends in Prague. Count Malabayla established the Canalgarten, Prague’s botanical garden (Ibid, 520). Like Pachta and Mozart, Malabayla was a Freemason. Therefore Mozart was visiting in this way, his Prague masonic brotherhood. It was with Canal during the first visit to Prague in January 1787 that Mozart drove to the so-called ‘Bretfeld Ball,’ ‘where the most beautiful women of Prague habitually gather.’ To avoid any doubt as to the honourable reasons for his doing this, Mozart had added quickly in his 1787 letter ‘that would have been something for you, my friend!’ (Ibid, 520).

Visiting “Pachta” eventually gave rise to an extraordinary story, that Mozart composed his six Deutsche Tänze K509 [German Dances] for either Major General Johann Joseph Philipp Pachta (or his nephew, Johann Josef) in the Palais Pachtuv itself. What we do know is that Mozart did write these dances for “Pachta” or his nephew (Christian Fastl, Art. „Pachta von Rayhofen (Rájow, Rájov, Reihofen), Familie‟, in: Oesterreichisches Musiklexikon online, Zugriff: 18.6.2019 (https://www.musiklexikon.ac.at/ml/musik_P/Pachta_Familie.xml) and it is historically possible that this may have been in the Palais Pachtuv – today the Smetana Hotel – which occupies the original seventeenth-century town palace in a quiet courtyard on the Annaplatz, at Karoliny Světlé. K509 does not appear in the general index of Mozartian works as cataloged by Köchel numbers, sitting between the K505 ‘Scena for soprano and obbligato keyboard, Ch’io mi scordi di te – Non temer, Amato bene ix, xvi, xxxiv, and K512, Recitative and Aria for bass, Alcandro, lo confesso – Non so d’onde Viene, xvi, 526 n.2’ (Ibid, 598). 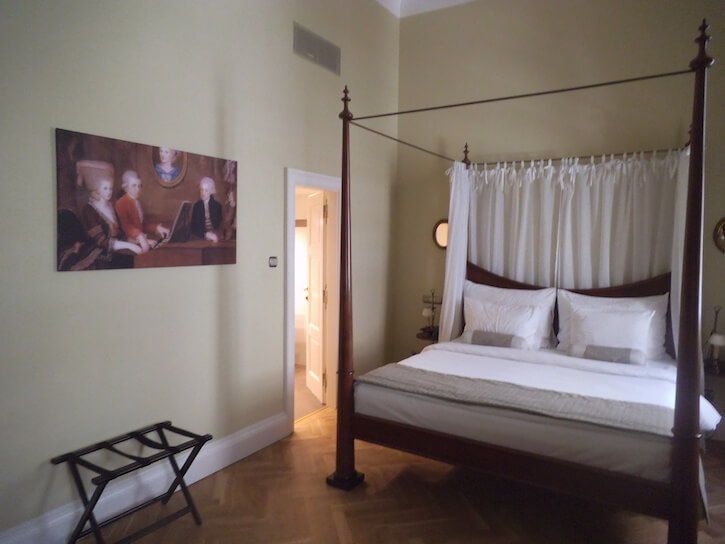 The hotel confirmed the tradition that Mozart stayed at the Palais Pachtuv, as told to the present author, although the hotel had no documentary evidence that can as yet support this story. By tradition, the very suite that Mozart supposedly occupied at the Palais Pachtuv is fittingly called the ‘Mozart Suite,’ situated on the first floor and overlooking the historic seventeenth-century courtyard. According to the Smetana Hotel, Mozart ‘himself composed his Six German Dances [K509] for the Count Pachta’ ‘in this suite’ of rooms ‘during one of the[ir] family matinees.’ (Courtesy of the Smetana Hotel, retrieved, 18 June 2019). The room is elegantly appointed with furniture in the style of the period and reproductions of Mozart portraits hang on the walls, such as the child portrait of him in the gala costume of Empress Maria Theresia’s youngest son, little Archduke Maximilian Franz, the court costume having arrived by special courier following his performance at the imperial summer palace of Schönbrunn, two days earlier. The tradition has it that Mozart was locked in this suite of rooms, with the challenge of composing some musical pieces so that he might be freed. The result was believed to be those same six dances. 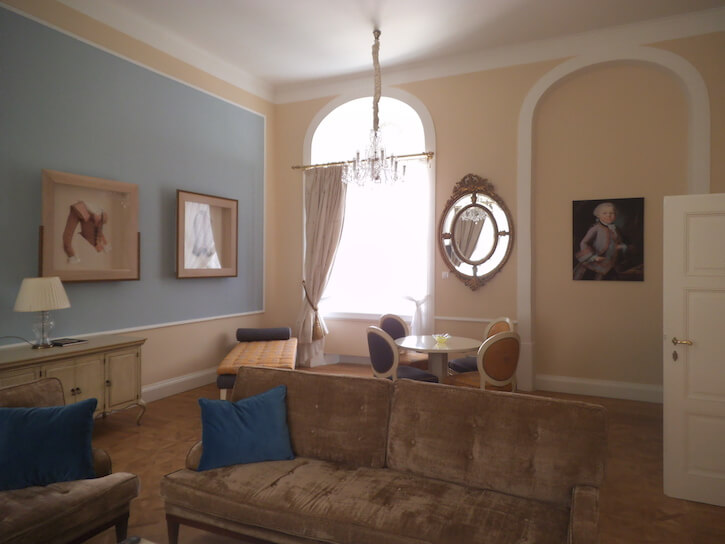 There will probably never be a way to confirm such a story and equally, no means to say it is entirely without substance. According to the Oesterreichisches Musiklexikon, Mozart did compose his German Dances [K509] for either Count Pachta or his nephew, and it would make sense that this story grew up around the central town palace in Prague where the Pachta noble family were famous for their gatherings and musical sponsorship. This fact alone could be the author of the story. Understandably, the hotel fosters this beautiful tradition and ‘verifies’ that Mozart indeed stayed here, despite the missing proof. On balance, Mozart almost certainly would have visited the town palace, because it was located in Prague’s Old Town, within easy driving distance of other places he unquestionably visited, such as the Klementinum and the Estates Theatre, definite points on the Prague-Mozart map. The Palais Pachtuv was the Prague residence of one of those families belonging to his closest circle of Bohemian friends.

When Mozart wrote of trying to see ‘Pachta’ in Prague in 1789, the assumption is that this would have been at a town palace, because Mozart says he ‘drove’ to see him and ‘Canal,’ two instances of calling on friends. But like the romantic villa of Betramka, a place in Prague with much heavier associations with Mozart, the actual physical evidence for all this, is at best fragmentary. Just because Mozart didn’t mention it, does not, of course, exclude the possibility of its having happened.

It is just possible, however, that the six German Dances [K509] were indeed penned at the Palais Pachtuv, as part of a musical penalty and that Mozart wrote them in these rooms. Prague was, of course, the place where he completed his monumental opera Don Giovanni which had its world premiere at the Estates Theatre in 1787. We know that Mozart similarly regarded the Prague musical public highly, indicated by the fact that he wrote this supreme opera of morality for a city of severe beauty and dark church domes.

But the elegance lay most importantly, in the Prague ear. It was music he intended for a more ‘superior’ Prague musical palate. Indeed, there was a feeling that Prague was more musically sophisticated than her imperial sister – Vienna – this might also be seen in the vast difference in operas that Mozart wrote for both cities.

Vienna however, was Mozart’s artistic home, whatever the warmth of the Prague welcome he received there. He had lived in Prague for brief periods. He conducted there. He drank there. He played at least several of the city’s church organs. And of course, he composed there.

Prague loved and mourned Mozart deeply at his death, whether or not he said the words attributed to him of the city’s people: ‘Meine Prager verstehen mich.’ [My Praguers understand me].

What I think is certain from the music he wrote for the Praguers, is that he understood them.