SJ Harris, a stuntwoman working on the set of Deadpool 2, died on Monday after a freak accident. Harris, licensed motorcycle road-racer, spent four years in Brooklyn, New York riding through the crowded streets before turning to a professional career as a bike rider in Hollywood.

Harris was killed during a motorcycle stunt in Vancouver, Canada. The accident occurred shortly after 8 a.m. when Harris lost control of her motorcycle, jumped a curb and went flying through a glass window at Shaw Tower. Medical personnel rushed to the scene, but Harris died at the scene.

Harris was performing a stunt where she was riding her motorcycle down a set of stairs before losing control of her motorcycle. Crew members were distraught following the accident, as the heavily damaged motorcycle sat near the broken pane of glass.

The 911 call states that Harris went airborne was thrown through a window and was motionless following the accident.

Reports indicate that an Advanced Life Support ambulance carried Harris, who was loaded into the vehicle. Paramedics worked on her for 45 minutes before driving away. The ambulance drove away without the lights or sirens on, indicating that Harris had already died.

Deadline states that this was Harris’ first movie where she was a stunt performer. An investigation into the accident is underway. There were five officers at the scene of the incident.

Ryan Reynolds, the lead actor in Deadpool, wrote on Twitter: “Today, we tragically lost a member of our crew while filming Deadpool. We’re heartbroken, shocked and devastated, but recognize nothing can come close to the grief and inexplicable pain her family and loved ones must feel at this moment. My heart pours out to them – along with each and every person she touched in this world.” 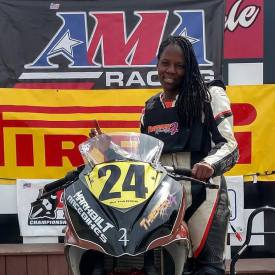 Motorcycle accidents kill or seriously injure 500 people in California and over 4,690 riders in the United States.

Harris discussed crashes during her time as a racer on her blog. She stated that accidents do cross her mind at times, but she notes that she wasn’t “quite scared” of accidents. “A racer can’t let it stop us,” she was when talking about crashes.

She continues, “Weren’t we all scared of crossing the street before we understood what made us scared? It wasn’t us actually walking across the street, we were more afraid of the possibility of getting hit by a moving vehicle. Once we became confident in our ability to look both ways before crossing a road, the fear diminished. THAT’S IT…you have to analyze WHY YOU ARE AFRAID, then the fear is lessened..”

Reasons why a good office is important for your business

Czech Film Center is heading to the Toronto International Film Festival 2019. We’ll be based at