One of the greatest poets of the twentieth century, Rainer Maria Rilke was born in Prague December 4, 1875. Rilke grew up at Jindrisska 19, just off Wenceslas Square. To commemorate the anniversary of the poet’s birth, a bust of R.M. Rilke has been unveiled in the centre of Prague with a ceremony on Wednesday morning with the  attendance of diplomats, literary scholars and artists.

Colophon presents two early Prague poems written by Rilke, translated by Prague-based poet Anne Brechin. Rilke wrote several poems about Prague before he left the city in 1896 to study in Munich, but they are among his juvenilia and are not widely known among English speakers.

Homewards, through hot evening reds:
factory-men and whores
with distress written in sweat and grime
on their low, dull foreheads.

You could break an eye on their slumped
demeanour. Heavy slam their bootsoles
on the road, stirring the dust
which howls after them like Fate.

It’s so pretty, the weatherbeaten
brow of the old Hofburg;
even the short stares of children
must climb it.

And its welcome look rushes
Vltava-waves to the castle’s foot.
From the bridge, the Holy Ones
watch seriously.

The towers turn, the newer ones,
to St Vitus on the top
like a choir of children to their
dear father.

For appreciative readers of his work, Rainer Maria Rilke is the patron saint of poetry, a touchstone to revisit at particularly difficult or introspective moments in life. Therefore, The Inner Sky, a recently published collection of poems, journal entries, fragments and other marginalia translated for the first time into English by Damion Searls, is a fascinating book and a welcome addition to the Anglophone Rilke oeuvre, though it lacks the polished power of Rilke’s more crafted publications.

New collection lacks polish, but remains a must-read for fans

Born on Jindřišská street, just off Prague’s Wenceslas Square, Rilke, arguably the greatest poet of the past two centuries, came from quotidian beginnings. Rilke rarely referenced his biography in writing, but one piece in The Inner Sky, “Interiors,” alludes to the poet’s homeland and Shakespeare’s infamous gaff:

“You must have seen them: these small towns and tiny villages of my homeland. They have learned one day by heart and they scream it out into the sunlight over and over again like great gray parrots. […] The geography book is wrong. And our teacher lied. He told us the ocean starts way down at the bottom edge of the map of the Austro-Hungarian Empire. And now it’s here in the middle of the Kingdom of Bohemia …”

Rilke’s most popular book in English is Letters to a Young Poet, in which he uses his correspondence with a fledgling admirer as an opportunity to expound his views on art and life. The tone of the prose in The Inner Sky is somewhat less affected. Passages in which a young Rilke encourages himself to be patient about writing poetry gather strength from their innocent earnestness. A selection from “From Testament” is one example:

“Do not think, artist, that work is what tests you. [?] Not until your work has become your true nature so completely that you cannot do anything but prove your worth in it. Then, when you work like that, you are the masterfully thrown spear […] What tests you, though, is that you are not always thrown […]”

The most fascinating passage in the book is an “account,” as Rilke calls it, of a “difficult, alien disaster which descended upon me and drove me forth, to G., one morning at four (it was still night; a cold rain fell in the darkness), when I had just begun the work of coming to my senses. No one will ever learn anything else from me except the silent account I entrust to these pages. But before I burn the small blue leather notebook that I took with me then, on that journey, I want to set down this report of its condition.”

What follows is a seemingly unconscious string of words arranged in verse; automatic writing for Freudians to drool over: “Silver Pleasure Roughness Rounded Lot Lover / Brew Sand Why Never Warning …” and so on, for a page and a half. It is clear from the frantic fashion in which Rilke introduces this passage that it meant a great deal to him, and it’s obvious he never intended to publish it.

The hesitation one feels regarding The Inner Sky has nothing to do with the quality of the writing – Rilke could write a grocery list with more lyricism than most poets achieve in entire books – but the collection does make one wonder about the ethics of publishing texts that were never meant to be read.

In an age that profitably repackages its famous dead, including Rilke, with books ranging from Rilke on Love and Other Difficulties to Rilke on Death and Other Oddities, one must ask if this latest contribution isn’t simply another log on the lucrative green flame of the posthumous pyre. But The Inner Sky ultimately achieves more than that. Damion Searls has contributed thrilling new translations of this most familiar poet that show Rilke’s thought in its rawest form.

A must-read for Rilke fans, The Inner Sky will deepen the English-speaking world’s perception of the man behind the well-wrought verses. 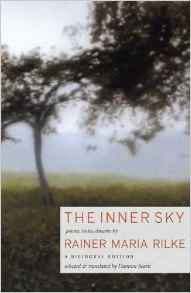 The Literature Of Occupy Wall Street