The image you see below (source) is an old postcard from Pivovar Praha-Vinohrady. If you’ve never heard of it, it’s because it doesn’t exist anymore. It was nationalilsed in 1945, and would be later shut down. For a while its maltings kept on working, mostly supplying Staropramen, who would later use the facilities as a storage. A massive fire broke in 2000 destroying much of the facilities, interestingly, this happened right when the new owners, a real estate developer, where having a bit of trouble with Prague’s heritage authorities. Anyway, you can see today what little is left of the brewery in the “luxury” apartment complex Korunní Dvůr. The only link with brewing its past as is a restaurant the serves Stella Artois (come to think of it, that beer pairs very well with the complex, cheaply made and sold at a ridiculous price to people who believe are buying something special). 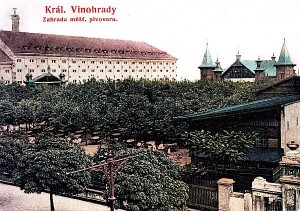 Pivovar Praha-Vinohrady, or Akciový pivovar a sladovna v Praze XII-Vinohrady, as it was officially called, was a pretty big brewery. It had a capacity of 150,000 hl, which would make it rather large even for today’s standards. It was also famous for its beers, the film studio that once housed and its beer garden. Those trees you can see in the postcard covered that beer garden, it was huge and it must have been awesome. Looking at it made me realise that this is not something you see very much in Prague, or even the Czech Republic.

For a city with such a strong beer culture and so identified with the beverage, and considering how much Czechs like to be outdoors when the weather is nice, it is remarkable how few beer gardens there are in this city. There are loads of patios, pubs, etc. with a few tables on the pavement and closed courtyards, and some of them are pretty nice, but it’s not what I mean. I’m talking about ancient, leafy trees, picnic tables you might end up sharing with strangers, that kind of thing, the stuff you’ll find in most Bavarian towns. Someone once mentioned that it was the Communists who did away with beer gardens and other similar places, I wouldn’t know, but it’s still a shame.

Yes, yes, I know about the beer gardens Riegrový Sady and Letná, they check all the boxes, but for one important thing, the beer, it’s awful! And Letná, 35CZK for Gambáč in a plastic cup? Are you joking? Fortunately, for us lovers of decent beer, not all is lost. I’ve been to a couple of places recently that put a bit of a smile on my face. 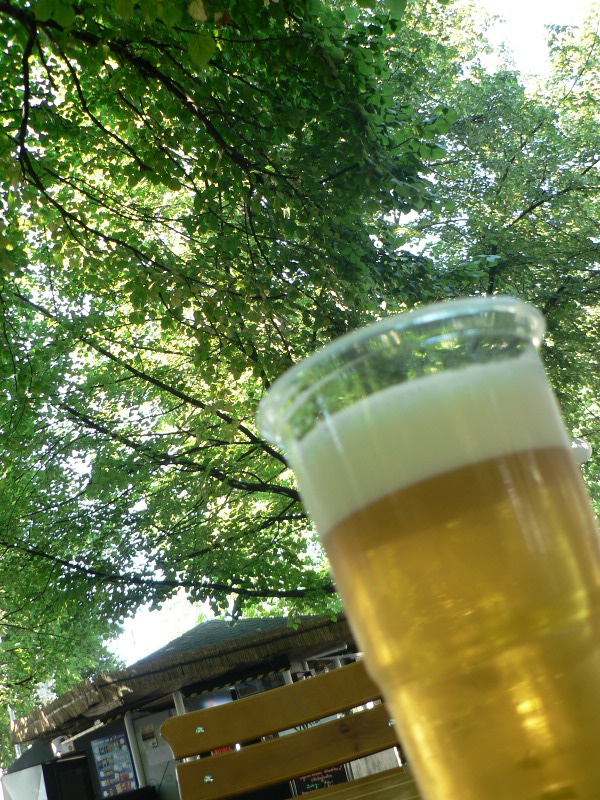 The first one has already been mentioned in a couple of websites, the beer garden of Restaurant Pražan, in Výstavýště, right by Stromovka. Up until recently it served Staropramen, which has been replaced by Únětické Pivo (if that isn’t a change for the better, I don’t know what it is). I stopped in the afternoon a few days ago, it’s far from having the atmosphere of Riegrák or the views of Letná (though some of the girls skating by were quite a sight) and the picnic tables are a minority, it does have the trees and Únětická 10° at 24CZK/0.5l almost makes up for the shortcomings (plastic cups included). What was a bit surprise was to see Chýně’s logo among the taps, they sold it as Černý at 24CZK a pop, after a first sip of that beauty (I believe it was their “magnetic” stout, BTW) I knew I had the most beautiful view and a great atmosphere right in front of me.

Can’t go wrong with this lineup

The second one was quite a find to me, I ran into it on my way somewhere else and, even though I didn’t have much time to spare, I couldn’t resist the call of a quick pint at one of those picnic tables. It’s called Klubovna, and I didn’t know it existed. According to its website, it’s a student’s club that holds cultural events, concerts, etc. The beer is Černá Hora, not my favourite, but still the kind of pivo you are rather glad to find because you know it could be a lot worse (and it seems it was, in Klubovna’s Facebook page shows Straropramen branded sunshades). I really liked this place, alhough it’s a bit small, it checks all of the boxes. I wish I had some photos, but when I went there on Monday there was a sign saying the place would closed until August, 12, it seems I’ll have to wait until then to go back. 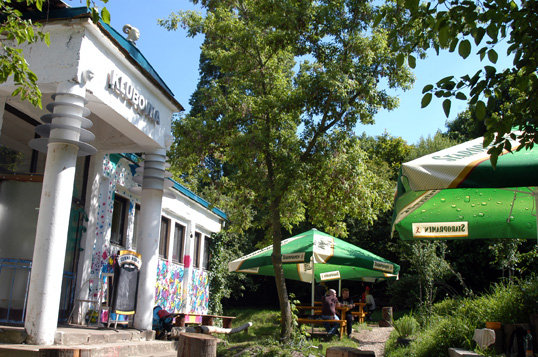 I’m sure I’m missing other good beer gardens with good beer. I’ve heard a lot about one on the opposite bank of the river from Zbraslav that has Kout and it’s very popular among cyclists and roller skaters and there’s also Divčí Skok in Divoká Šárka, one of those places that for reasons I can’t find, I’ve never been to. If you know of any, do let me know.

Back to the source