There’s one thing I must confess, I stopped being excited about every new microbrewery/brewpub that opens in the Czech Republic. On the one hand, because it’s been happening almost as often as corruption scandals among politicians, and on the other hand, because many of their beers aren’t that good. So when I first heard that a new brewpub was about to open in Old Town my first reaction was something that could be easily described as “Meh!”. However, soon after if opened early last May, good comments about the brewery started to be heard. It seemed there was reason to get excited after all. And no wonder, unlike most of the newest breweries, this one didn’t hire a kid fresh out of secondary school to do the brewing, but a geezer with a good number of brewing years under his belt, someone who not only knows what he’s doing, but can also imprint his personal touch to each beer. All that was confirmed  during a quick technical stopover with a couple of friends on my way to the first round at the Czech Beer Festival, the Vienna Lager at Pivovar U Tří Růží was lovely. But still, I thought that I’d wait a few weeks to give it a proper review. It turned out to be a good idea.

With my colleague and resident Prague Post restaurant reviewer Fiona Gaze, we decided we’d do a tag team review of this new place. She would take care of the food and I of the beer. After all, it’s a brewpub what we are talking about, and people should not only want to go for the beer, but also for the food.

The place still “smells” new, but it’s very nice and it shows that a lot of thought was given to the interiors. There’s plenty of very dark wood, the walls are covered in comic-like original paintings and the whole thing is dominated by the almost mandatory copper lined brewhouse. Small and welcoming. Very good, but for one thing, the soundtrack, that on our visit wasn’t only loud, but was also the FUCKING RADIO!  Please, this is a call to all restaurant owners. If you want to play music in your shops, I’m all for it, but don’t play the radio (or worse, MTV), not because of the music, but the ads, they are annoying, irritating, loud, repetitive and annoying. When you have spent a few million CZK to put together a place as nice looking as Pivovar U Tří Růží, I’m sure a couple thousand CZK more for something that can play MP3′s will not hurt too much. 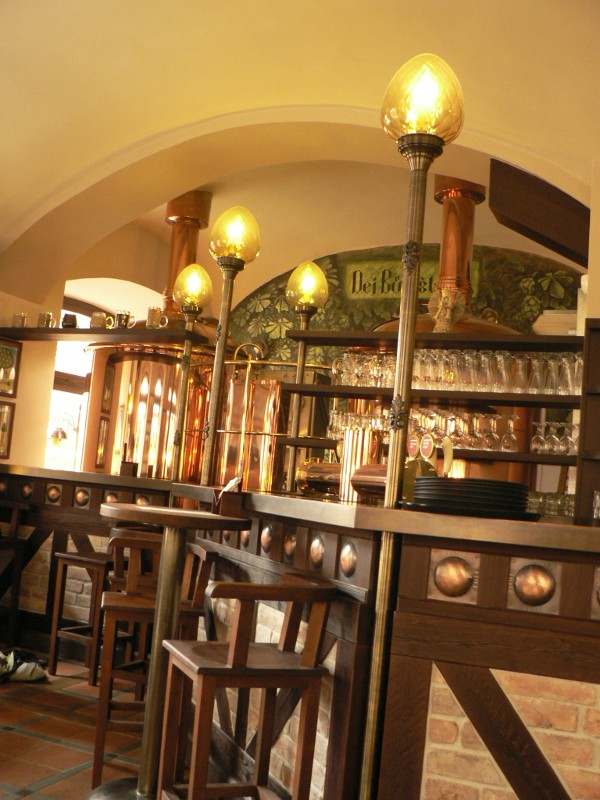 As I was arriving at the agreed time, I received an SMS from Fiona telling me she’d be a few minutes late. Women! No worries, I was sure I’d find some good company. That Vienna Lager wasn’t on tap (the brewery has some special beers on rotating mode), but what I wanted was to taste their Světlý Ležák.  Světlý Ležák, or Pale Lager, is the style that has made České Pivo famous around the world, this is the kind of beer that Spaniards, Brits, Yanks, Swedes or Russians picture when they think about Czech beer. It’s perhaps my favourite style, in good hands a Světlý Ležák can be one of the most wonderful beverages known to mankind, and it’s surprising and rather irritating how many Czech micro brewers get it wrong. Not this one, fortunately. Though a tad less carbonation would have been welcome, this one was a textbook beer, not in the brewed-by-the-numbers sense, but in the this-is-how-it-should-be-done sense. 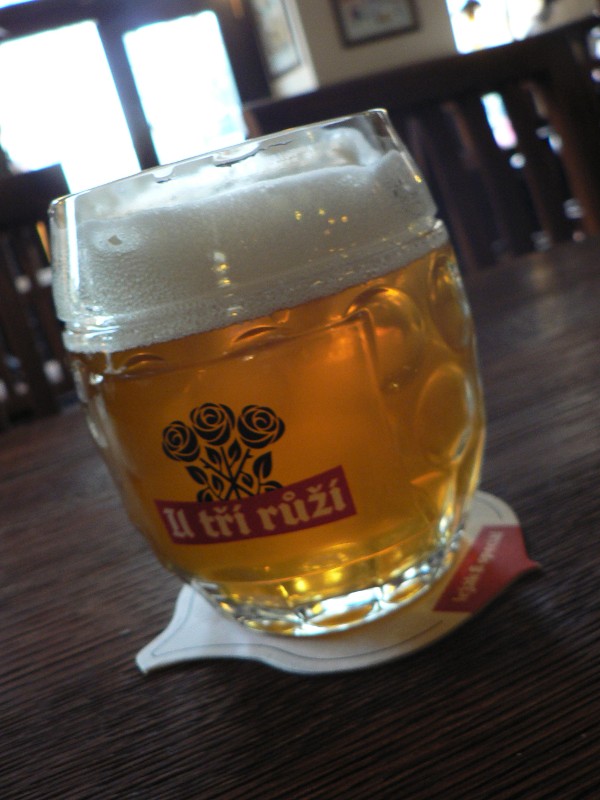 Fiona arrived and she ordered a Polotmavý Ležák. It made her really happy and I could see why when I got one as seconds. Once again, a well crafted beer, with all the pieces in their proper place. Subtle caramel, ripe pears and dried peaches with a hint of nuts or almonds and the hops behaving like a polite guest. This is the kind of beer I could drink from morning to evening and feel very happy (and quite drunk).

The food came, Gulášovká for me. 65CZK for a bowl of soup will raise a few eyebrows, but you forget about that with the first spoon. It was perhaps the best guláš soup I’ve ever had. The best way to describe it, besides delicious, is “poctivá” (a Czech word that can be understood in many ways, and all of them are good). As main, I ordered  duck, that the menu said it was roasted on hop cones. Didn’t find any of them, but the bird was better than fine, the read cabbage was lovely and potato knedlíky tasted like home-made (and looked like a miniature version of those I had in Franconia). What did Fiona have and what she thought about it? You’ll have to read her review in The Prague Post, she’ll say it better than me.

Anyway, back to the beer. The house’s Tmavý Ležak went really well with the duck, cabbage and dumplings, and another textbook beer this one was. Just as I like them, a bit of roast, a bit of chocolate and some dark fruit for good measure. Liquid desert followed in the shape of perhaps the most unfortunately named beer in the Czech Republic, American Light Lager, one of the two specialties of the day. Thanks to all the gods and godesses in heavens, this beer wasn’t “true to style”, it was actually a regular světlý ležák with a battery of four different hops. I met Robert Maňák, the brewer at U3R at the Beer Festival at Prague Castle, who told me he had used Citra, from the US, Motueka from New Zealand, some other hops from Australia and Sládek from Žatec. The beer was on the brink of falling over from the weight of its own IBU’s, but somehow managed to keep its shit together and, thanks to its bitterness, it turned out to be a very nice palate cleanser. One that got me ready for the last beer on that day’s list, Klášterní Speciál, an 18º dopplebock kind of thing with those Motueka hops. Extremely dangerous drinkability this beauty had, once again, one or two cones more and the beer would have been a hoppy disaster, but as it was, those Kiwi hops were almost taunting you into drinking this heavy hitter as you would knock down the first desítka of a scorching summer afternoon. Good that it was my last beer and I was already quite full with the food, otherwise… Wonderful stuff! 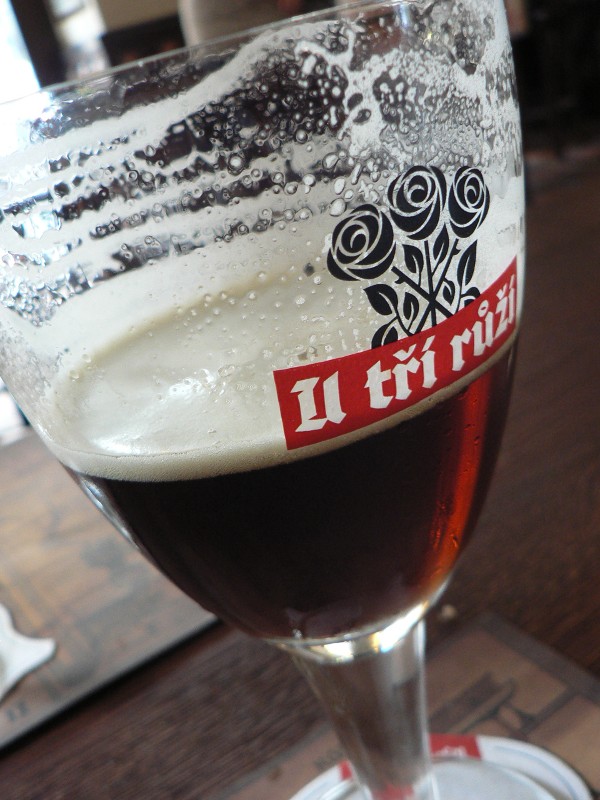 Overall, I left very satisfied.  Prices are on the rather high side (beers are sold in 0.4l measures at 39 or 46CZK, depending on the style) , and yet I didn’t feel I was in a tourist trap. The food was good, the menu is quite interesting and the beers were superb. Definitely, Pivovar U Tří Růží is a more than welcome addition to the Prague beer landscape.

Book review: All the Whiskey in Heaven