I have earned a reputation of someone who knows Prague’s beer scene like few others, something I’m childishly proud of. I’ve even written a book on the topic! (Which a leading beer and travel writer has called “beery bath tub of Rabelaisian wit and wisdom.”) But with the said beer scene being so dynamic at the moment, even a committed pisshead like me is having trouble with keeping up with the news and changes and that’s why I was surprised to see Na Palmě in Fiona Gaze’s roundup of the multi-tap pubs a few weeks back. Last year work often took me around Palmovka and I knew the place existed, since it was just another nondescript  watering hole with Pilsner Urquell and Kozel, both from keg, that I never fancied visiting. If I wanted to drink Urquell, I had U Jagušky almost next door and not far from there is U Rokytky with its delicious Svijany, so why bother? But now, it turned out they had Únětické Pivo and a rotating tap I had to go. 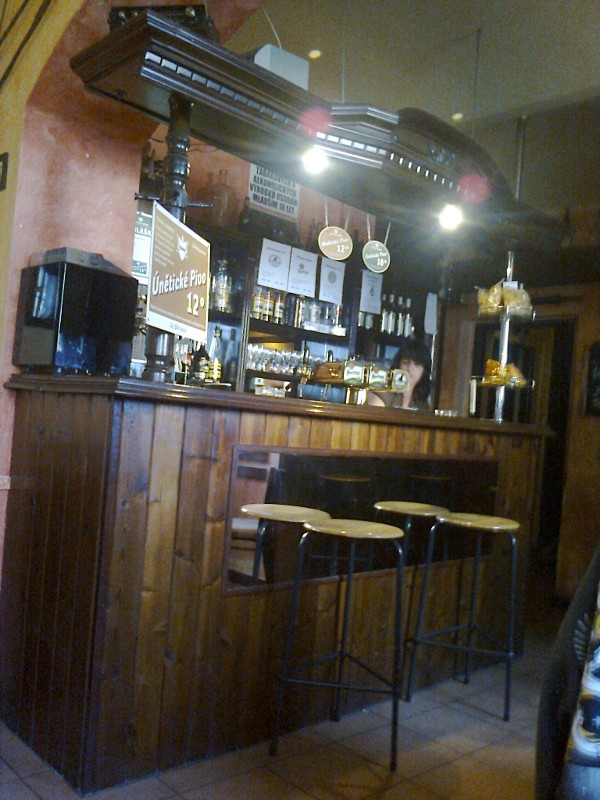 Na Palmě it’s in a pretty small cellar, just a handful of tables and the bar. There’s nothing very special about the interiors, just your run of the mill neighborhood spot that must have looked the same twenty years ago. But I love cellar pubs and I feel rather comfortable in this one as well, it might also be because, even though I’m 40, I am the youngest patron by far this early afternoon.

I take a seat at a table near the bar. A friendly waitress comes to take my order. I order Únětická 10°, but they don’t have it today, I will have to make do with 12º, you can do A LOT worse than that. Well tapped, I must say, and it doesn’t spend too long in the glass.

The waitress passes by and asks me how I’m liking my pivo. “Very much,”  I say. She also asks me if I want another one. “Very much,” I say. Chýně, it is this time. Now it’s my turn to ask questions and given that Urquell and Kozel are still around I want to know how well the new boys are selling. “It’s our best selling beer,” this woman say rather proudly and with a smile, and then adds something that I shouldn’t find surprising anymore: “Hodně nám pomohl” (it has helped us a lot), and I believe her. All of the seven or eight people there at the time are drinking Únětice. No, that’s no true, one is drinking Chýně.

A couple of minutes later I’m chatting with her about the other beers they have in the pipeline. The conversation brings the owner to my table. He gives me some more information. They still have the Prazdroj stuff because they inherited it with the lease. He claims that hardly anyone drinks it, that people come for the other beers and he hopes that eventually the giant will give up on them. Either way, he’s happy with how much his customers like the new beers and is convinced he’s made the right choice. So am I.

See where this is going? No? OK. Here’s another example, Decentní Dýně.

I must have walked past this bar a million times and not once did I think of going in. Even though from it outside it had always looked like a nice, welcoming place, there was something that kept me away, in fact, it almost made me cross to the other side of the street. If I was a vampire, it would seem to me like a cross or a head of garlic: a sign of effing Stella Artois. I can’t fully express how much I hate that pretentious pseudo-belgo shit! Not there anymore! Take your balalaika and sing what my guitar wants to sing! (yeah, the news is so good that I’m quoting a  Scorpions song). Braník in fancy dress has been replaced by none other than Únětické Pivo!

I had noticed the change a couple of months ago, but it was only last Monday that I managed to drop by. My intuition had been right, Decentní Dýně is a nice, welcoming pub, the kind of place where old friends run into each other, which is actually exactly what happened to me, I ran into an old friend just as we were both heading to the door.

It was still a minute or two before three and the place was still closed. We were trying to see if there was anyone in when a young bloke came  and asks if we are there for a beer. Well, yes. We both take a seat at the bar and order each a 12º. After exchanging our mutual “howyoudoings” and “howthingsaregoings” and discuss the beer we are drinking and a couple more things (my friend also knows his beer, very well) we start to chat with the owner. A pretty friendly chap. The topic in question is beer (is there anything else to talk about?).  He tells us that Kocour Stout didn’t sell too well, but that the superb Catfish Sumeček has been a surprising hit so far. Yeah, besides having two taps with Únětice, they have a third one that rotates as kegs are sold out.

Considering how radical the change has been beer-wise, I ask him how the patrons have taken it. Decentní Dýně is actually a bar that specializes in rum (they have an impressive list with more than 100 entries) and cocktails, so the štamgasty didn’t mind the least. On the other hand, he has noticed that since the Smíchov stuff was replaced by proper pivo, new people started to come and sales of beer are up by 25%.

Now you see where this is going? Still not? OK. I guess I’ll have to put things more clearly.

Two years ago a restaurant owner, who had recently ended a ten year long relationship with Plzeňský Prazdroj and decided he’d start selling regional and micro beers, confessed to me that switching suppliers had probably saved his business. Now you get it?

Let’s forget about personal tastes for a moment. Unless you have or are planning to have a tankovná or a pub with high enough volume to attract money from big brewers, there is very little business sense in offering big brands like Pilsner Urquell, Budvar, Staropramen or Krušovice (let alone Heineken and Stella; why do people still sell that crap?), because those beers will not get people through the door. You can argue that since you have a place where people do not go to drink beer, say, a café or pizzeria, those brands will not scare anyone, either. Which is true, they are safe bets, specially if we are speaking about Urquell and Budvar, but why should that be enough?

Let’s say you’ve chosen the safest bet of all and have Pilsner Urquell. People who like PU and fancy having one are more likely to go to a nearby tankovná, they know it’ll be better than the pasteurized keg one you serve. They might still go to your place, but not because of the beer, but because they like whatever it is that you do well there. Now imagine you have, say, Kout na Šumavě. You won’t lose any of your regular clients, but it very well might draw in someone who likes that beer because you are the only one who has it in the neighborhood and, if they also like whatever it is that you do so well there, you will have another regular client and, you’ll agree with me here, you can never have too many of those. But that’s not the end of it!

Pilsner Urquell is the most expensive industrial světlý ležák  in the country, it’s even pricier than not a few micros, and since we are speaking about beers in the same category, there’s nothing that says you can’t sell a glass of those at the same price, or a Koruna or two cheaper, than Urquell, thus increasing your revenues per pint, with the added bonus that you’ll probably sell more also by the volume. We can argue about qualities and personal tastes until the end of days, but it’s very hard to argue with a bottom line.

So, if you are the owner of a café, restaurant or any other kind of place where beer is not a deciding factor to bring people in, then you should perhaps consider picking your phone and call a regional or micro brewer to see what they can do for you.

Top prosecutor on the future of the judiciary