From downtown Sarajevo, we took tram 3 with our friend Haris, a war veteran who now works for the Oslobodjenje newspaper. He wanted to show us the building where the newspaper was published during the war. The tram took us down Zmaja od Bosne Street, dubbed “Sniper’s Alley” during the war because snipers used to shoot at civilians as they tried to cross the road.

There are still several bombed-out buildings on Sniper’s Alley – a stark contrast to the spruced-up downtown area and a harsh reminder of the devastation wrought by the siege. (Today, enterprising Sarajevans sell “Take a Ride Down Sniper’s Alley” T-shirts around town.)

The infamous street is home to the newly refurbished, bright-yellow Holiday Inn – the only functioning hotel during the siege and the wartime abode of international journalists. Before the war began, the Holiday Inn was the unofficial headquarters of Bosnian Serb leader Radovan Karadzic (now an indicted war criminal) and his Serbian Democratic Party.

The war started in April 1992, soon after Serb snipers at the Holiday Inn opened fire on unarmed civilian demonstrators outside the hotel. After a 20-minute tram ride down Zmaja od Bosne, we arrived at the impossible-to-miss Oslobodjenje newspaper building. The building was so completely demolished that it’s hard to believe any part of it is still standing. Amazingly, the paper continued to publish every day throughout the war from this location.

During that time, the newspaper was printed on any kind and color of paper that could be found, and the journalists distributed it themselves. The Oslobodjenje building may remain in its current condition for years to come. The official plan is to preserve it as it is and turn it into a war memorial. Secret tunnels and survival tips Another important sight is the once-secret tunnel under the runway of Sarajevo’s Butmir airport.

During the siege, the one-kilometer (.62-mile) tunnel was the city’s only access to the outside world and one of the only means of smuggling in precious food and medical supplies. One end of the tunnel starts at the home of Bajro Kolar’s family, who lived there throughout the war.

The Kolars have set up a small museum in their house at Tuneli 1 in the Ilidza-Butmir district. From 9 a.m. to 6 p.m., visitors can see photos and a film about the tunnel and get a glimpse of its first 50 feet. Admission is DM 5 ($2.60/88 Kc); tel. (387) (71) 46 68 85 or 62 85 91. Back in the center of town, the FAMA Survival Shop on Veliki Curciluk Street sells books, maps, posters, videos and CD-ROMs to educate people about the Sarajevo siege. One gem is the Sarajevo Survival Guide, a book which portrays the city of Sarajevo “not as a victim, but as a place … where wit can still achieve victory over terror.”

The book includes recipes Sarajevans were forced to invent during the siege; among them are garden snails (“After a rain, in the park or in a garden, find snails, wash them and cook them as long as it takes them to leave their homes.”), rice pie (“Rice was never used in pies before.

Now it substitutes for cheese.”) and brodetto, or “canned mackerel floating in humanitarian aid.” Meanwhile, the heart of Sarajevo is still the beautiful Turkish Quarter, or Bascarsija, with its cobblestone streets, restaurants, cafes and traditional metal-working shops. 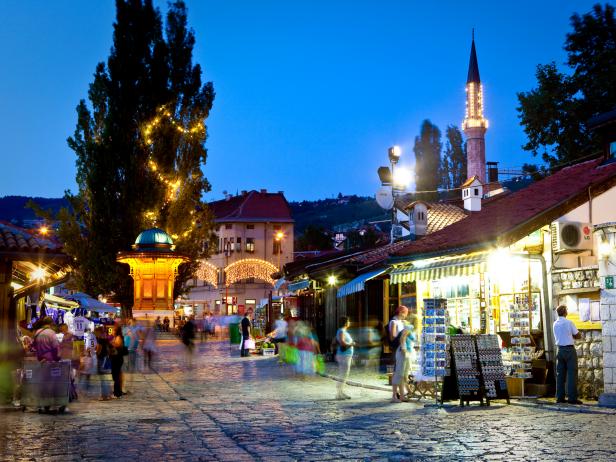 My husband and I ate in the quarter almost every day, sampling delicious Bosnian dishes with a distinct Turkish influence. We heard the call to prayer from the tower of the Gazi-Husrevbey Mosque, and we chatted with friendly shopkeepers, who sit outside their shops socializing and drinking Turkish coffee. In addition to selling attractive vases and plates, most of the shopkeepers sell intricately engraved shell casings from the war.

But perhaps the most poignant keepsake you can buy is a simple postcard. Many of the postcards being sold today feature panoramic photos of Sarajevo taken from the numerous new graveyards in the surrounding hills.

The high price of hurt

While the physical toll is being tracked during the pandemic, there are no solid numbers yet to illustrate

It’s no secret that shipping large volumes of goods can be challenging. Between ensuring the safety

Artists learn many different techniques to bring their paintings to life. From the choice of medium

To be successful in the E&S property and casualty insurance world, it is important to have