Lucie Turnerová from the Charles Bridge Museum and boat company Prague Venice helped us get to know a bit about the history of the landmark.

She describes the Charles Bridge as “the epicenter of Czech spirit,” an idea that heightens the bridge’s status as a standalone work of art as well as a landmark.

Here are 10 facts to share with your friends the next time you traverse Prague via this storied stone connection.

1. The numerical palindrome 135797531 carved on to the Old Town Bridge Tower at the east end of the bridge is far from random. This sequence, which reads the same backward and forward, refers to the exact time and date of the placement of the bridge’s foundation stone, determined by royal astrologers as an auspicious time. Work began on the 9th of July 1357 at 5.31 AM. Medieval beliefs attributed a magical power to odd numbers and arranged them in a particular way to create a pyramidal pattern symbolic of power.

3. Once a year on the day of the summer solstice — between June 20 and 22 — the sun sets directly over St Vitus’ Cathedral. If you stand at the Old Town Tower of the Charles Bridge starting about an hour before sunset, you can witness the sun approach the church and then cut across the top of the main tower and set directly over the chancel, to briefly re-emerge from the apse and set again. Some say this divine scene is mere coincidence. However, knowing that Charles IV placed great importance on astrology suggests that he may have meticulously calculated the necessary repositioning of the bridge when building it at a slightly different angle to the Judith Bridge in 1357. The same architect, Petr Parléř, designed both the bridge and the cathedral.

4. Originally named Stone Bridge because it was the only one in Prague, the bridge became known as Prague Bridge when others were built. It was only during the early 19th century that the bridge acquired its current name, saluting Emperor Charles IV as part of the Czech National Revival movement. The movement led to the appearance of other landmarks celebrating Czech pride and artistry such as the National Theater and the National Museum.

5. The Charles Bridge has witnessed some gut-wrenching scenes in its time: it used to serve as a place of execution or of public chastisement for criminals who were dipped into the river in wicker baskets. Crimes that got this punishment included using false weights and measures at the market. Most famously, this is where John of Nepomuk was thrown into the river in 1393 for allegedly refusing to divulge the queen of Bohemia’s confession secrets to suspicious King Wenceslas IV. The king reportedly had him thrown into the Vltava, upon which Nepomuk’s body is said to have miraculously lingered at the surface with five stars shining above it. John of Nepomuk (Jan Nepomucký) was canonized in 1729, despite some questions about the authenticity of the stories. 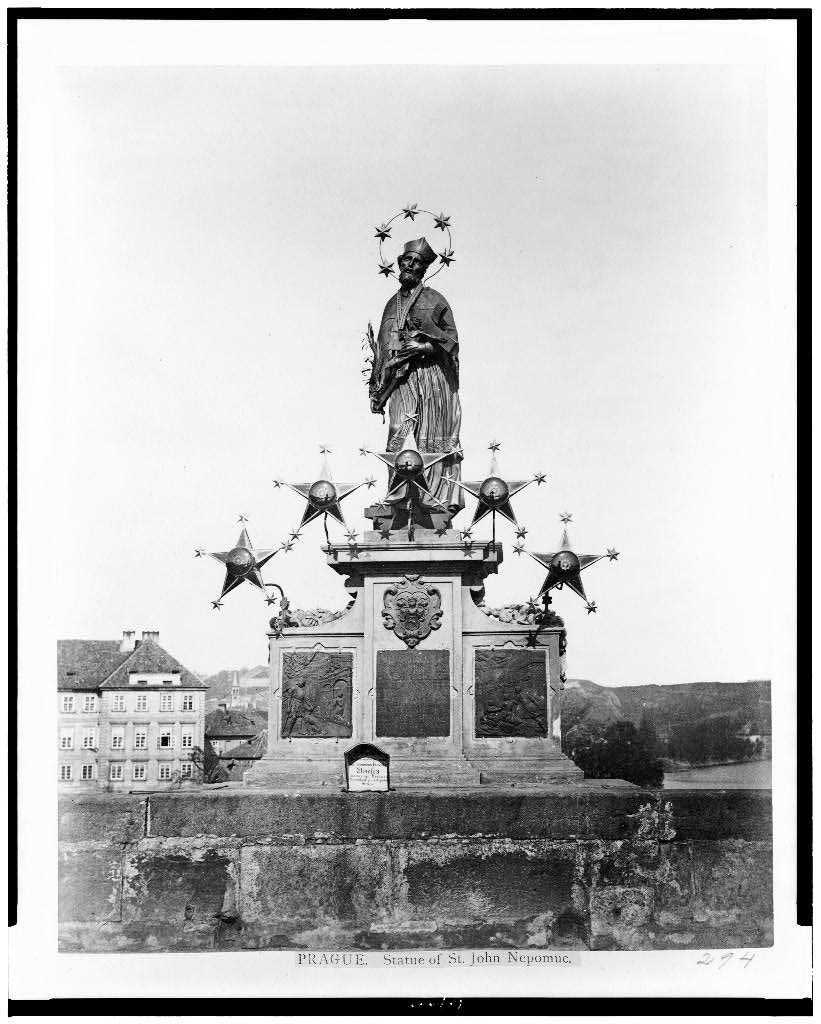 6. Many a visitor to the Charles Bridge has stood in front of the bronze statue of John of Nepomuk, the first one placed on the bridge in 1683, and rubbed the plaque showing his martyrdom to get good luck. The scene shines bright amid the bridge’s blackened statues and plaques. Nearby however, is a second plaque featuring a shiny dog that also attracts the superstitious touches of many visitors to Prague. Rumor has it however, that this dog has no lucky value whatsoever, and only shines because mischievous local students decided to shine the dog one night to chuckle at the hordes of misled tourists that flock to the bridge and touch it every day. Another rumor is that rubbing the martyrdom scene itself traces its origin to some enterprising students who made up the tale just after the Velvet Revolution. They charged people to touch the picture so they could get some pocket change. Either way, the touching is quite modern or the plaques would be much more worn down.

7. The first monument to be erected on the bridge was the gilded bronze crucifix Statuary of St. Cross with Calvary that dates back to 1657. This crucifix intriguingly sports a Hebrew inscription. The gilded inscription reads ‘Holy Holy Holy is Our Lord’ and was added in 1696, paid for Elias Backoffen, a Jew who supposedly turned his back on the Christian monument, or made some other perceived insult to it. The lettering is left in place as a reminder of history. 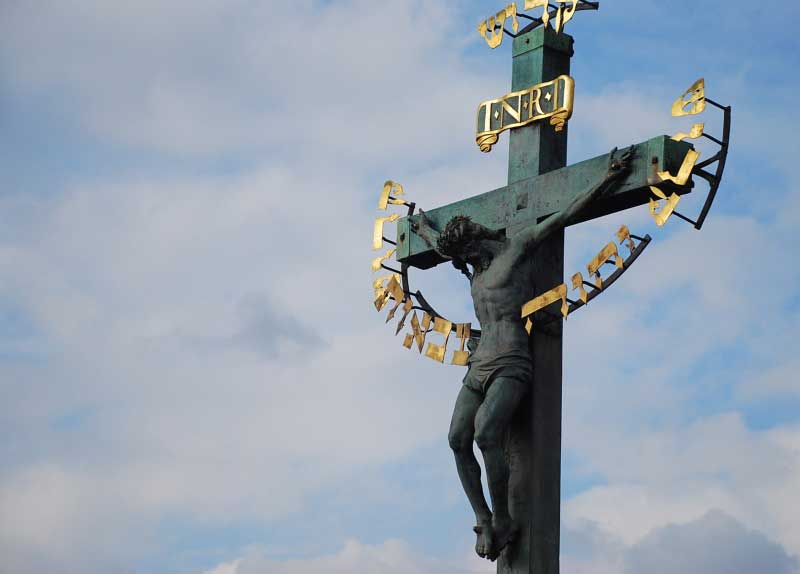 8. At the east end of the Charles Bridge, there’s a stone head carved into the parapet known as Bradáč (or Bearded Man) who watches the level of the water day and night. During Medieval times he served as a warning of imminent flooding: if the water had risen to beard level, it was about time to pack up and seek higher ground. If you look out over the parapet downstream, you’ll spot him looking out over the water, ready to hold his breath. Bradáč found himself two meters below water level during the 2002 floods, revealing the devastating extent of the disaster that struck the city that year.

9. Most of the statues that line the Charles Bridge are replicas. When first built, the bridge was a much simpler, more functional affair. It is only with the rise of baroque culture that the intricate statues and plaques were added to the bridge starting in the late 17th century and up to the early 20th century. The Vltava’s history of flooding has made the bridge a dangerous place for such works of art, and sandstone fares poorly in open air. These factors led to the statues being swapped for convincing copies. You can still find some of the originals however at Gorlice, in the walls of Vyšehrad, and at the Lapidarium of the National Museum in Holešovice. 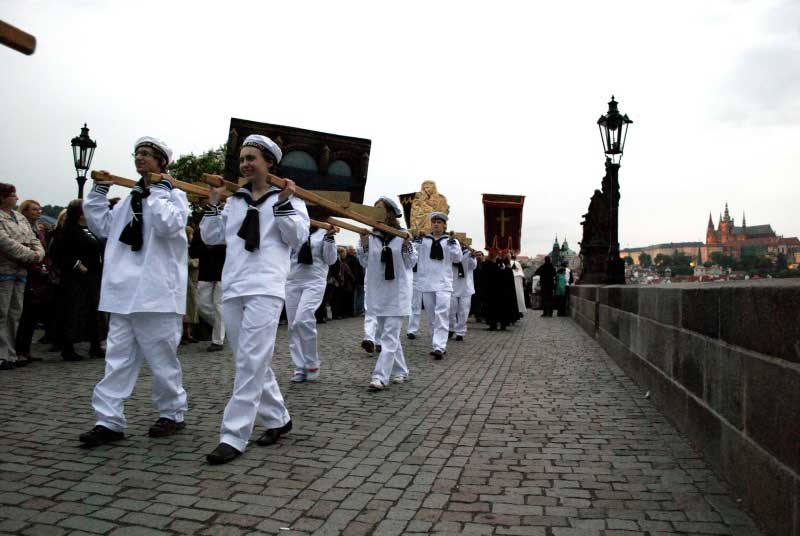 10. In May every year a baroque festival called Navalis is held on and above the water in commemoration of St John of Nepomuk, the patron saint of Czech waterways. Most of the action takes place around the CharlesBridge. Onlookers can expect a mass and procession drawing in hundreds of pilgrims from around the world each year, a parade of Venetian gondoliers, a dragon boat race, parachutists and a baroque music concert, as well as a light show and a small fireworks display. In 2016, the festivities will take place on May 16. The precise program will be at www.navalis.cz.

The Charles Bridge has many more secrets, and some are a bit more dubious. A golden sword is said to be buried in it, for example. And in time of national strife, the spirit of some hero or other, depending on who tells the legend, is supposed to come and claim it. But a controversial renovation in 2008–10 found no such object, or any of the other legendary treasures, skeletons, secret rooms or magical scrolls said to be hidden within the stone pillars.

There is a golden sword in plain view, though. Next to the bridge by the Malá Strana side on a pillar is the statue of the mythical knight Bruncvik with a sword, shield and lion, put there in 1884. It replaces a statue of Roland from 1502, which was a reminder that the Old Town side controlled the bridge and could collect the tolls and other fees.

Another legend is that eggs were used in the mortar for the original construction, and that is a matter of some scientific debate with camps pitched on each side throwing … different studies and analyses back and forth.

The legend goes on to say that villages were asked to donate eggs for the construction, and the message reached the village of Velvary in a garbled from. Residents there are alleged to have sent hard boiled eggs instead of raw ones. True or not, people from Velvary are still taunted about it some 650 years later.

While hard to imaging now with all the downtown traffic, cars used to be allowed on the bridge up until an 1965–78 renovation removed the asphalt top. Horse-drawn trams, electric trams and buses also used to use the bridge.

Contrary to common belief, Charles Bridge is not the oldest stone bridge in Europe or even in the Czech Republic. The oldest is in the town of Pisek, dating back to the late 13th century.

If you are interested in learning more about the bridge, the Charles Bridge Museum offers many more tales including models of what the bridge looked like under construction, recreations of medieval stonemason methods, illustrations of the bridge through time and more.

Established in 2008, the museum also offers Prague Venice tours which take guests down to the old docks and under the bridge to an atmospheric strip of water named Čertovka (meaning Devil’s Channel) which earns the area the nickname of Venice of Prague.

Assad: Ceasefire can be signed in Prague