Without a doubt, Prague is a beautiful place in the summer. Between the Vltava River, historic architecture, and many beautiful parks, there’s plenty to feast your eyes on.

But sometimes a little tranquility among the flowers or in a bit of urban woods is what is required.

There are also some quaint and relatively unknown gardens throughout the city. All of the gardens on our list are free to enter, peaceful and picturesque. For a brown bag lunch, the Franciscan Garden hidden just off of Wenceslas Square, will save you a lot compared to the street seating at restaurants in the area.

Other gardens offer a trip back in time. Wallenstein Gardens shows a glimpse of how the upper half used to live. Kinsky Garden as well used to be private property; its summer villa is now a museum and a nearby artificial waterfall shows how landscaping used to be done when people wanted to fix nature’s oversights.

A real refuge from tourists is Vojanovy sady, a short walk from the Malostranská metro station but behind a doorway most people miss.

A bit out of the center, Rajská zahrada is a modern take on the garden, with a waterfall and landscaping done just a few years ago. The multi-use space tries to balance calm with a few places to exercise and play games, but without skateboards or bikes. 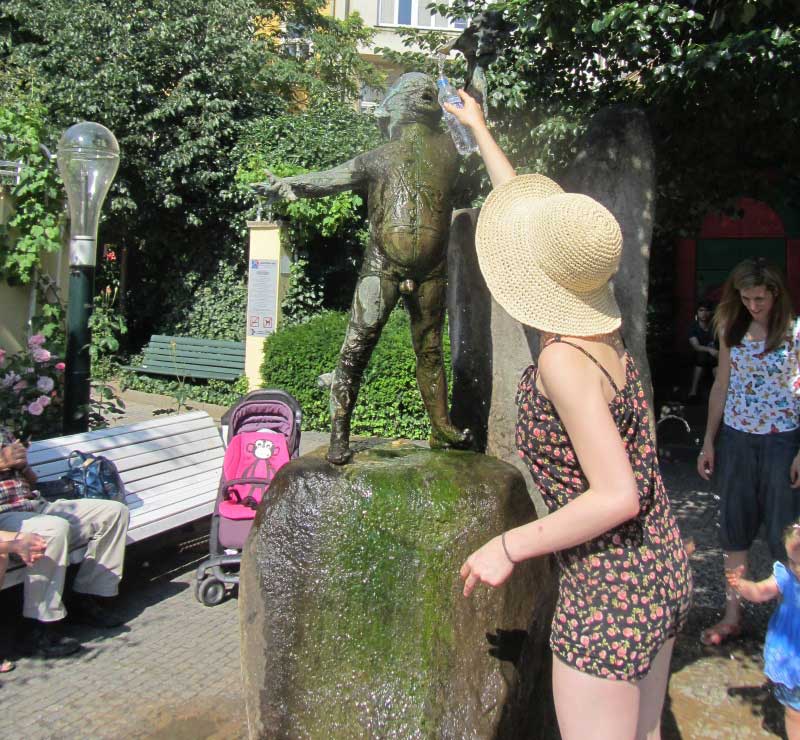 Situated in the heart of New Town near Wenceslas and Squares is the quaint Franciscan Garden. This area has been part of New Town since the 14th century, but it was completely restored in the 1990s. Its location makes it a nice shortcut for pedestrians, while the garden’s many benches provide a place to sit down and eat lunch or read.

There are sandwich shops and ice cream vendors near both entrances, but none in the garden itself. Oddly, though, there is a small dress shop. The garden is home to beautiful rose bushes and a few small flower gardens, as well some interesting sculptures and fountains. The garden is kid-friendly as well, with a sandpit and see-saw.

Originally built of the Carmelites, it was taken over by Franciscans in 1604. It became public property under the communists in the 1950s. The metal doors with graphic references to St Francis were put up between 1989 and ’92

The garden can be entered from the back of Pasáž Světozor or from a small almost hidden gateway at Jungmannovo náměstí. 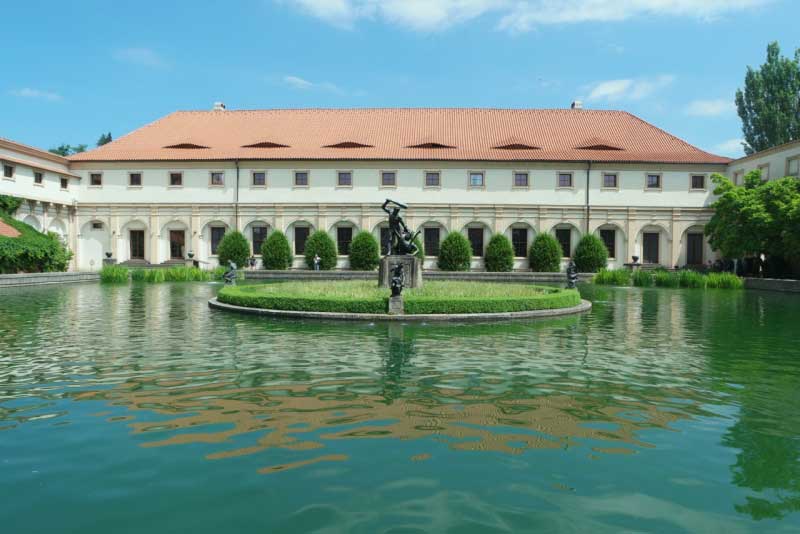 Czech administrative buildings are not as closed off from the public as they are in other countries. The garden behind the palace that houses the Czech Senate is as accessible as any park or garden in the city.

Wallenstein Palace itself is a beautiful work of Baroque architecture, reportedly the first in Prague. Built in the early 1600s, the complex was restored in 2002 and won a prestigious European award for the preservation of cultural heritage. The mannerist garden lies on the southern side of the palace. With three large archways, fountains and bronze statues by a Adriaen de Vries, the gardens are equally as grand as the palace. The fountain has fish in its pool, presided over by Hercules battling a dragon.

These statues are actually copies, as the originals were looted by the Swedish army in 1648 and can be found today at Drottningholm Palace, just outside Stockholm. A somewhat surprising feature lies on the west side of the garden: a wall of artificial stalactites, as if the wall was ripped out of a cave. Hidden in the formation are snakes, owls and monsters. Strange as they may seem, these are typical features of mannerist gardens. 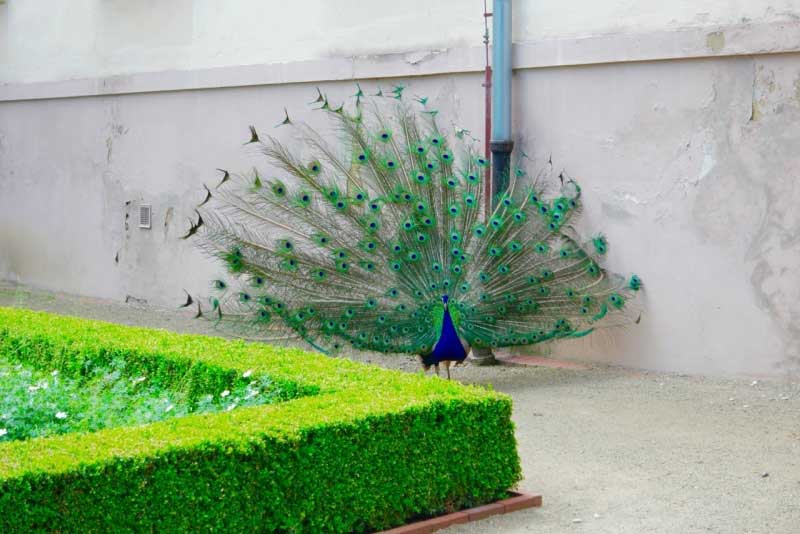 According to the sign at the entrance to the garden, the area was established first as a church orchard in 1248 and is the oldest partially preserved garden in Prague. It is now named after the Czech actor Eduard Vojan, who was in early films and died in 1920.

This sparsely populated garden is a pleasant place to relax or take a walk. Although there isn’t much shade near the benches as they are located along the main walkway, there are options to sit under trees at the small manmade pond on the edge of the park. There is also a small grassy area with enough space for families to walk.

The only distracting thing about the atmosphere is the screeching call of peacocks on the other end of the park. However, they are a sight to see and worth the noise. The peacocks roam mostly at the back of the garden, but do get around a bit. They are very accustomed to people and will let you come near them and not be alarmed. Their vibrant blue necks and elegant feathers are a wonder to see up close.

Overall, this well-maintained garden has a bit of everything — trees, water and flowers, but the main attraction is definitely the peacocks.

Even though it is in the heart of the Malá Strana, most tourists miss the small forbidding entrance. As a result it is a quiet oasis. Don’t tell anyone about it. 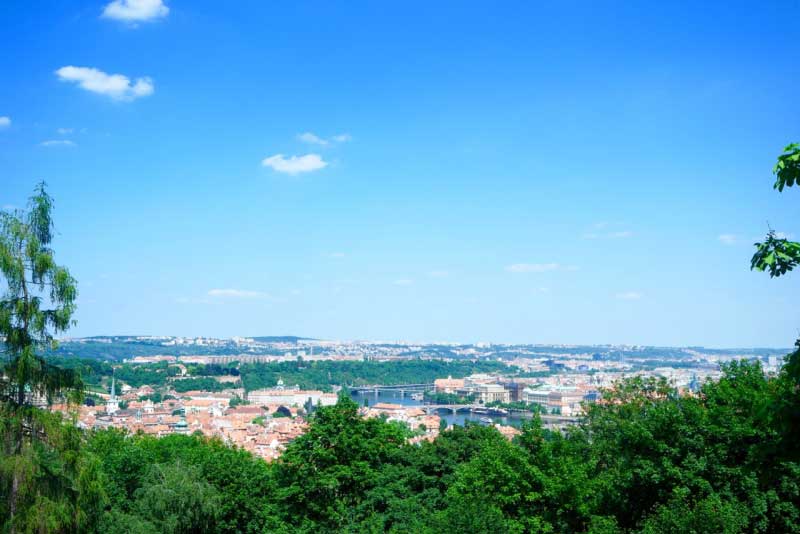 One of the larger gardens is really more of park. It has small pond, fake waterfall and other decorative and landscaping details including a stone Hercules statue, which make it an English-style garden. Its main feature is the neoclassical manor house, Letohrádek Kinských – Musaion, that is now a folk museum.

The garden has a fairly steep walk from the main entrance at Újezd to the manor house, but there is a reward at the end: an even steeper walk up into some woods with a Ukrainian wooden church that was moved in 1929 to save it from demolition. Eventually, you come across the Hunger Wall, an early attempt at a public works project and a piece of Czech history. The other side of the Hunger Wall is Petřín, with its own set of attractions including flower beds and an orchard. Petřín, though, tends to be a bit more crowded.

Once you get out of the lower part of Kinsky Garden and into the woods, it is almost like you are far from the city. Few people venture that deep, and there are some benches with good views down to the river. Due to the trees and shade, it can also be much cooler than the rest of the city. The woods lead into a pleasant rose garden, which is technically part of Petřín. 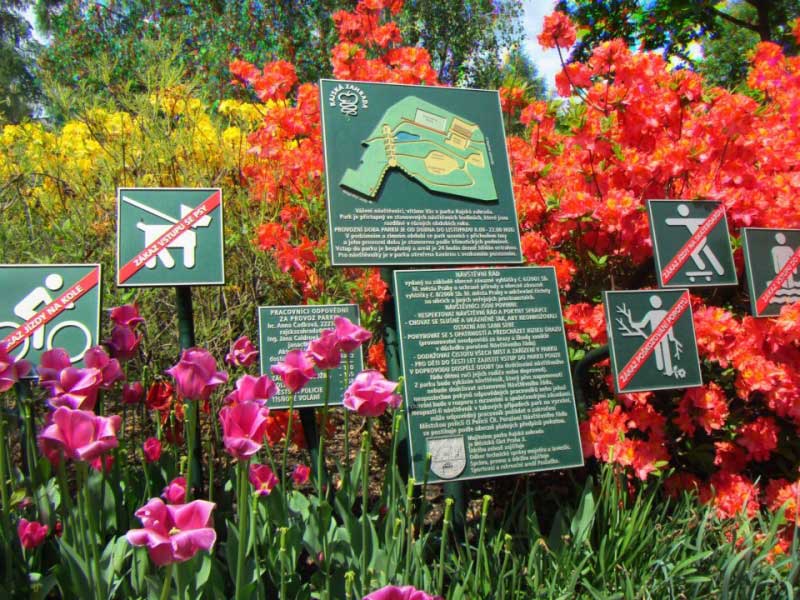 One of the newer recreation areas in the city was built between 2006 and ’08, and has a waterfall, ever changing assortments of flowers and roses on trellises.

The top of the waterfall has a view of Prague Castle off in the distance. The bottom has an overgrown little pond with turtles, fish, frogs and seasonal birds.

There is also a small sports field with a running track, a petanque court and some all-weather exercise equipment. Near the entry is a small café and a children’s playground.

Historically, the area was a vineyard, and later an orchard before falling into disrepair by the 1990s.

The space is much quieter than the adjacent Riegrovy sady, and good place to sit and read or catch a bit of sun. The sound of the waterfall creates a calm mood

What is most notable is the extensive list of forbidden activities, including but not limited to: no smoking, dogs, alcohol, swimming, picking flowers, music, grilling, open flames, biking or skateboarding. But have fun!

Note that there is a metro stop also called Rajská zahrada. The garden is nowhere near that stop. The closest metro is náměstí Jiřího z Poděbrad, or the tram stop Husinecká.

Top 10 Parks in Prague to waste the day in