Prague is regarded as one of the world’s most beautiful cities. But getting that perfect panoramic picture is a bit difficult. There are a few precise spots to go to that offer a great overview.

Towers and tall buildings, of course, are an obvious choice. But hours are erratic, with some are closed for long stretches in the off season. We will do a round up of towers later.

The waterfront also has a few nice angles on Prague Castle, but lack that grand wide perspective that comes from a great height.

For those who want to stay on terra firma while practicing panoramic photography we have found a few hilltops with unobstructed views.

Most are easy to reach and each has its advantages. Of course, what makes a good shot into a great shot is the weather, and we can’t help you there. 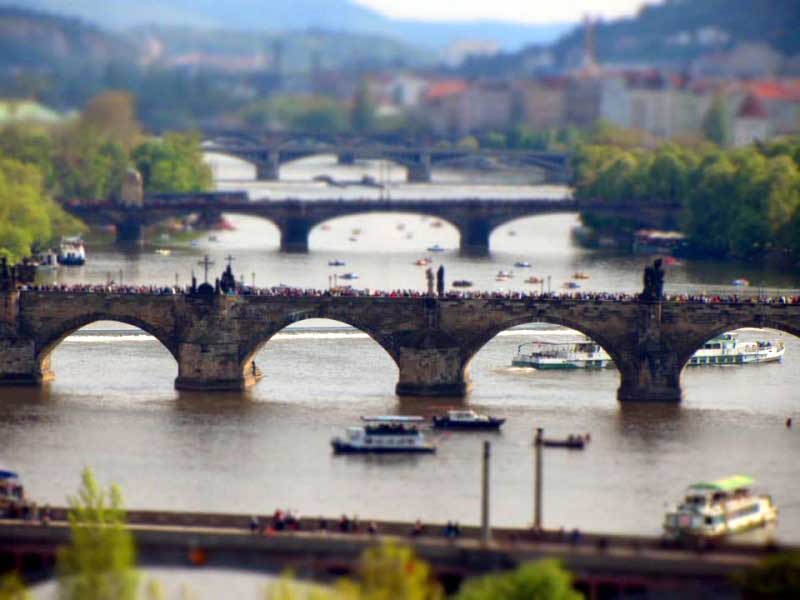 Everyone has seen pictures of all of the bridges on the Vltava River lined up. The spot to take that iconic shot is in Letná Park, right in front of Hanavský Pavilion, the cast iron neo-Baroque restaurant that looks a bit like a rocket ship from a Jules Verne novel. If you are lucky you can get fog rising from the river in the early morning. Later in the day sunlight should be hitting Old Town. 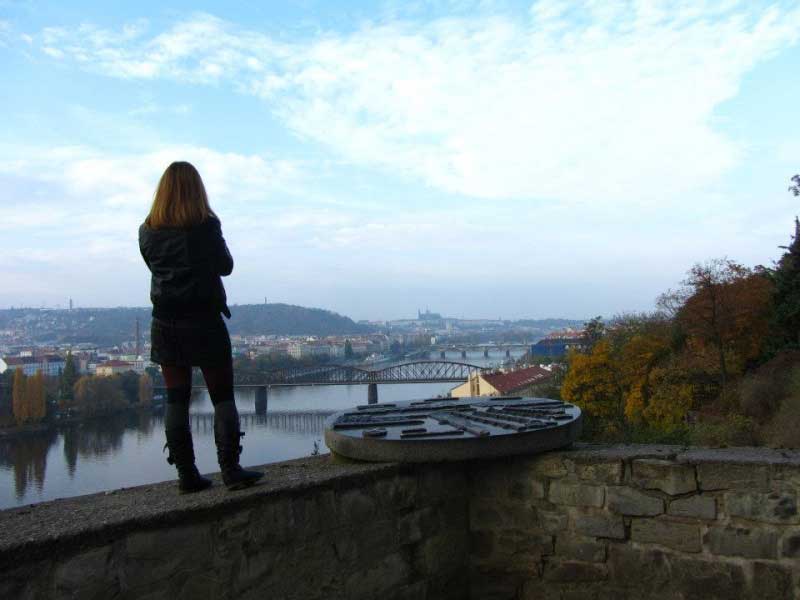 Late afternoon gives you the chance to get dramatic shots up and down the Vltava, including views of Malá Strana and Prague Castle. The walkways on the brick walls of the fortress take you high above the tree tops. The area was first settled in the 10th century, and the current walls were largely built in the 17th century. A small spot offering a good shot of the castle is next to Galerie Vyšehrad. A metal map helps you to identify the structures in the skyline. While there, be sure to check out the Devil’s Column and the cemetery with many famous historical figures. 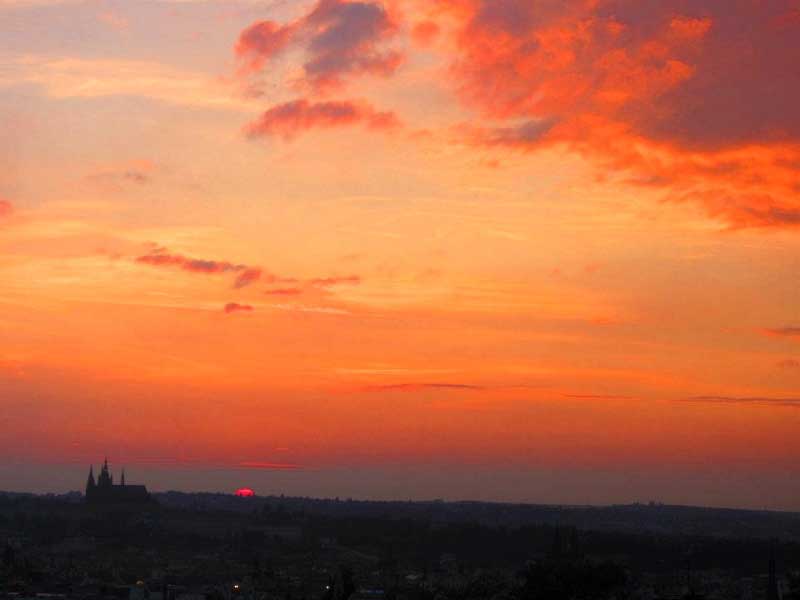 By far the best place for a sunset picture in the summer months, the top of one of the fields in this park located a short walk from behind the National Museum has an unobstructed view of Old Town, Malá Strana, Petřín and Prague Castle. In the autumn and winter, though, the sun sets far to the side behind trees and buildings, making the view a bit less impressive. When there is a light fog, you can get a ghostly effect of the skyline. A heavy fog hides the castle completely. 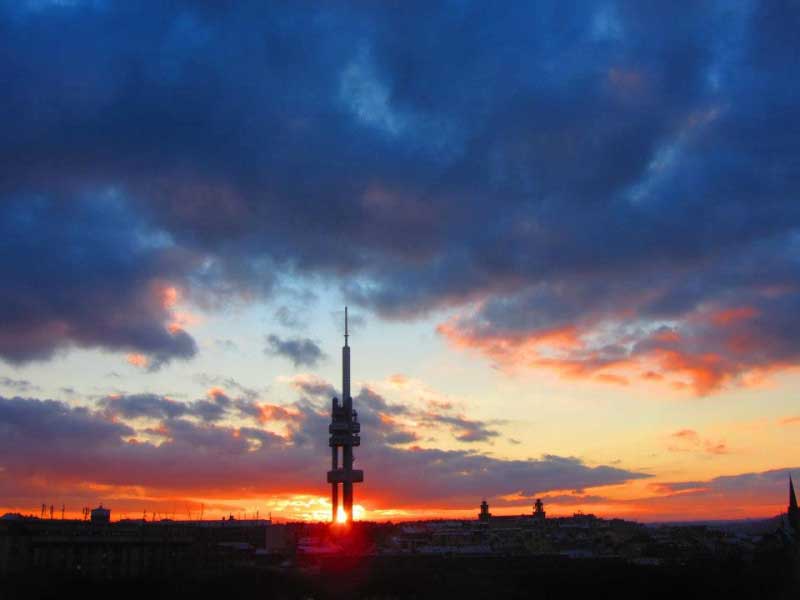 Many cities like Paris, Berlin, New York, Seattle and Toronto embrace their radio and TV towers as municipal symbols. But for many reasons both historical and artistic, the Žižkov TV Tower will never find its way into people’s hearts like the Eiffel Tower, Fernsehturm, Empire State Building (the top is a broadcasting antenna and zeppelin port), Space Needle and CN Tower. Nonetheless it makes for striking pictures. The same park also offers good shots of Vítkov Hill with its giant equestrian statue of Jan Žižka, once the world’s largest, and a rather mediocre view of Prague Castle. 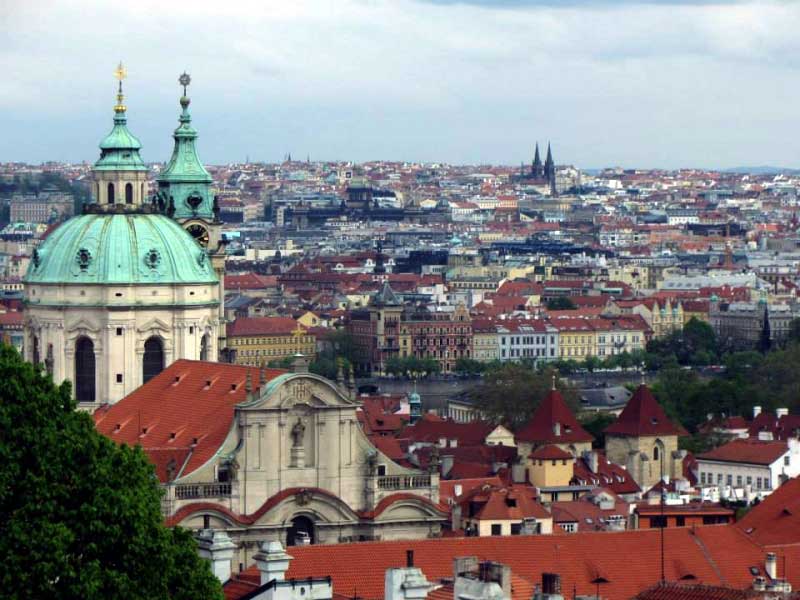 It stands to reason that if Prague Castle can be seen from most of the historical center, then looking down from the Castle one should have a good view of the city’s rooftops. While the tower of the Cathedral offers a great view, the one from ground level is almost as good a bit easier to get to. The tower steps are a bit narrow, and with people going up and down at the same time just reaching the top is an ordeal. From right next to the main gate of the Castle there is a view of St Nicholas Church, the red roofs of Malá Strana, Petřín and the National Theatre. 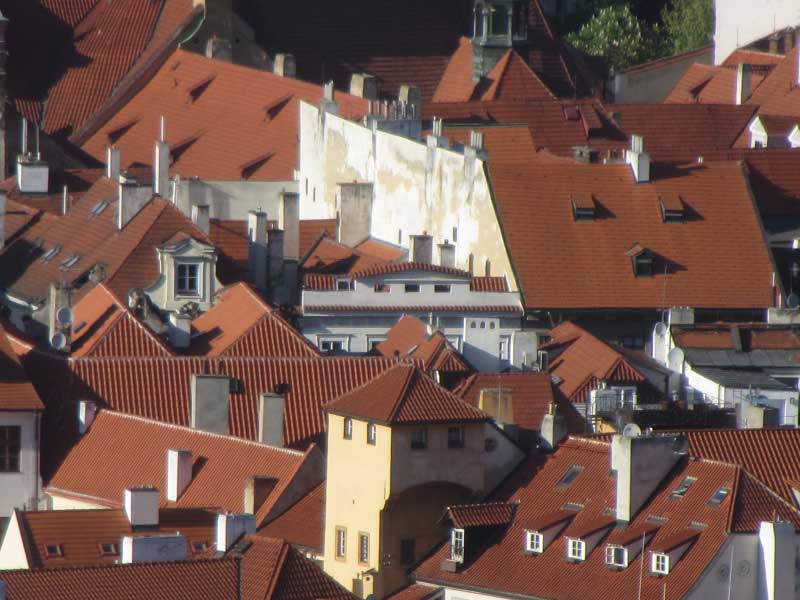 The heavily wooded hill between Malá Strana and Smíchov is a bit tricky due to all he treetops. The easiest way to get a good shot, aside from going up the PetřínTower, is to take the funicular to the middle stop called Nebozízek. From the stop itself, which is slightly elevated, there is a good angle down to Old Town and the Vltava river. Heading toward the Hunger Wall, there are a few spots that when the treetops permit offer artsy zoom shots of the red tile roofs of Malá Strana. Just on the south side of the Hunger Wall is a vantage point with benches and a clear view of the waterfront with Dancing House and National Theatre. 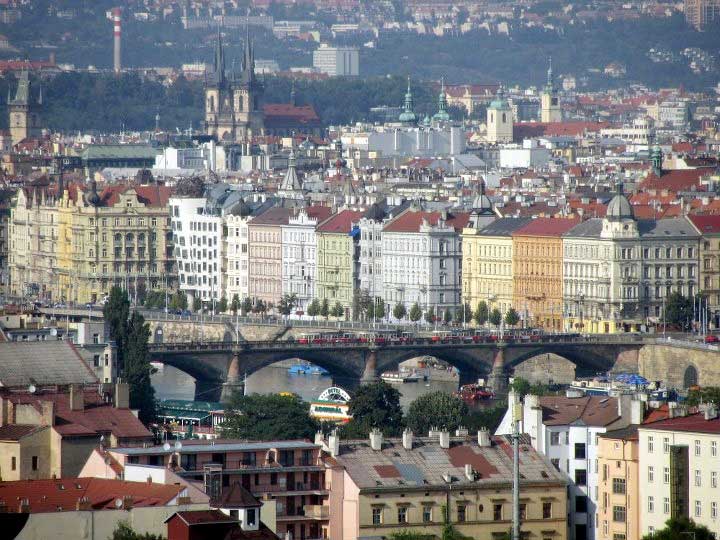 This one requires a bit of a walk. The cliff above Smíchovské nádraží has a few spots where one can get a nice shot of Palacký Bridge (Palackého most), Jirásek Bridge (Jiráskův most) and the Dancing Building with Old Town Square in the background. Aside from some nice urban hiking, though, the residential neighborhood has few tourist attractions aside from some not particularly old churches and cemeteries including a small fairly abandoned Jewish cemetery in poor repair. 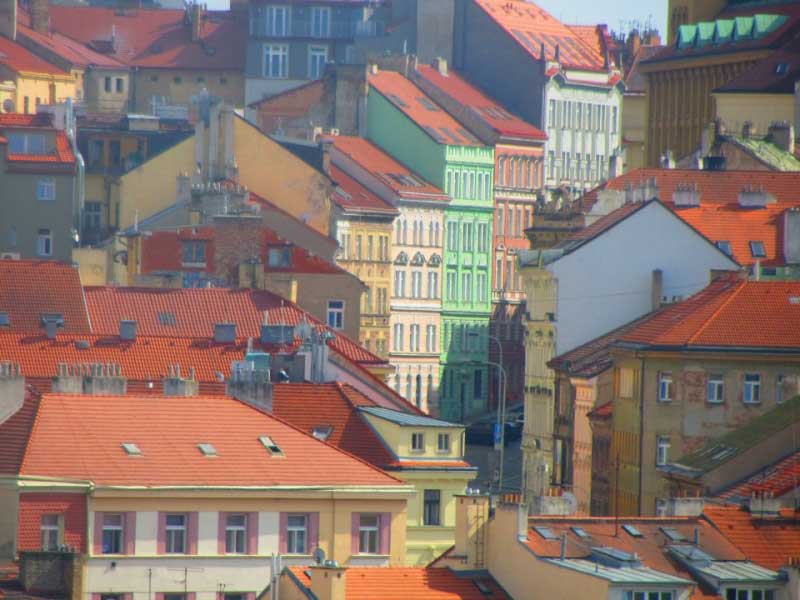 The base of National Monument at Vítkov Hill —  also home of the Tomb of the Unknown Soldier and the large equestrian statue of Jan Žižka by Bohumil Kafka — has some unusual views of both the nearby Žižkov neighborhood and the back of the historical city center. The top of the steps offers the best unobstructed view. For a fee, you can go to the top of the monument for a slightly clearer view of almost the entire city. Numbers for this tour are restricted for safety, however. The sides of the hill offer sporadic views of the city’s formerly industrial but now trendy neighborhood of Karlín. The hill also houses the Military Museum. 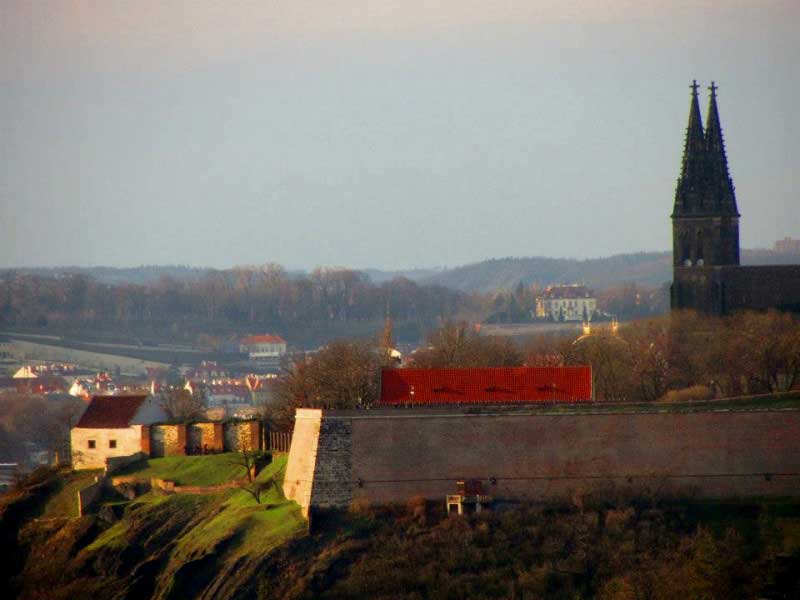 A dog owner’s paradise, this hilltop park owned by Czech Television offers several fields where the furry ones are allowed to run off their leashes without fear of traffic. The cliff is pretty steep, but treetops still obstruct much of the view. With a little work you can find a handful of spots that have views of Prague Castle, Vyšehrad and the Vltava. Straight across the river you can see Kostel svatého Filipa a Jakuba, a once rural hilltop church built in the 1890s that is now surrounded by the city. Long stairs lead down to Podolí.