Slacking off is a centuries-old art in the Czech Republic, and finding a place is easy

The best thing to do in the summer, especially when in another country, is to sit in a park and watch people pass by. Looking at a map of Prague, one can note many green patches scattered throughout.

In fact, according to Prague’s City Hall, there are almost as many as 200 parks in the city.

That’s a lot of parks to choose from, and what better to do after a long day of walking than to just sit and relax in the grass.

For the benefit of those who love the outdoors, here’s a list of favorite parks in Prague to sit in, sleep in, and to generally just hang out in.

It is not of course a complete list, and we know we should have include your favorite park but somehow didn’t. We tried to pick a scattering across the city.

Letná is known in particular as the place to meet for a beer, while the pavilion in Havlíčkovy Sady has wine made from the park’s own vineyard. The whole are of Vinohrady used to be vineyard, and a little area for grapes in the park is all that is left.

Some parks, like Stromovka are huge, with bike paths and many hidden nooks and crannies. Others like Karlovo náměstí are small urban oases suited to an outdoor brown-bag lunch.

Places like Klamovka and Cibulka have remnants of the Romantic era, when people would fill their estates with statues of Greek and Roman gods and odd little buildings called follies. 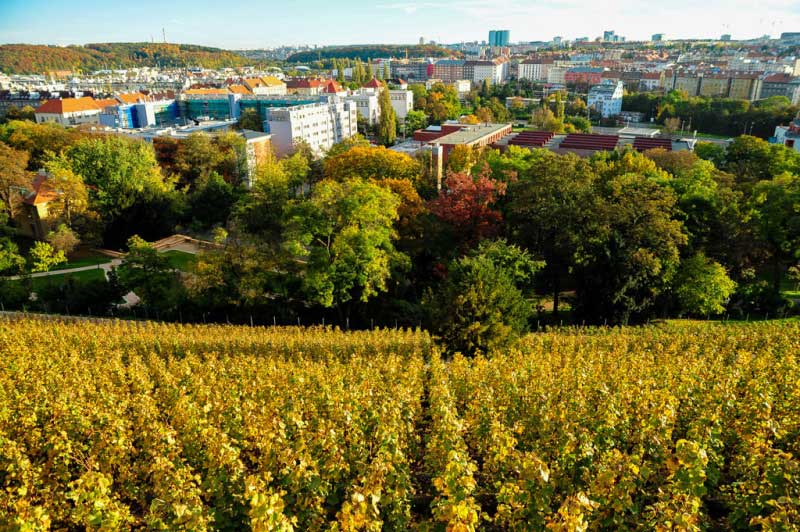 This is the second largest park in Prague and is located in the neighborhood of Vinohrady. The English-style park has a large villa near the front of the park with a vineyard right below it. The park is relaxed and has a path that winds through it. There are many trees and shady areas to sit under and there are typically a few runners and dog walkers. In the park there is a cafe, a pavilion near the villa and a historical vineyard gazebo, all perfect places to get a coffee or a glass of wine. Other interesting parts of the park include an artificial grotto and a pond. 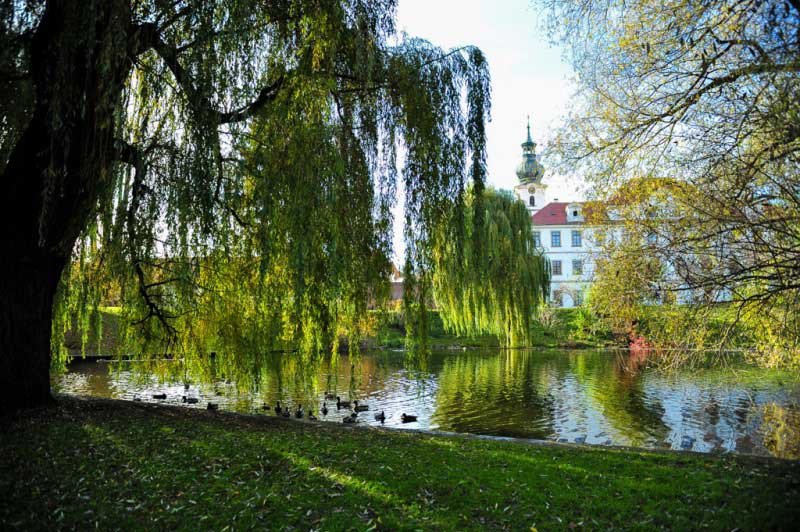 Břevnovský klášter is not only the oldest male monastery in the Czech Republic but also has an exceptional garden surrounding it. The garden is very peaceful and secluded since it is surrounded by the monastery walls. The monastery is also famous for making its own beer, so after a stroll through the garden, head over the restaurant near the front of the complex. The park closes at eight, but the restaurant stays open until 11 p.m. 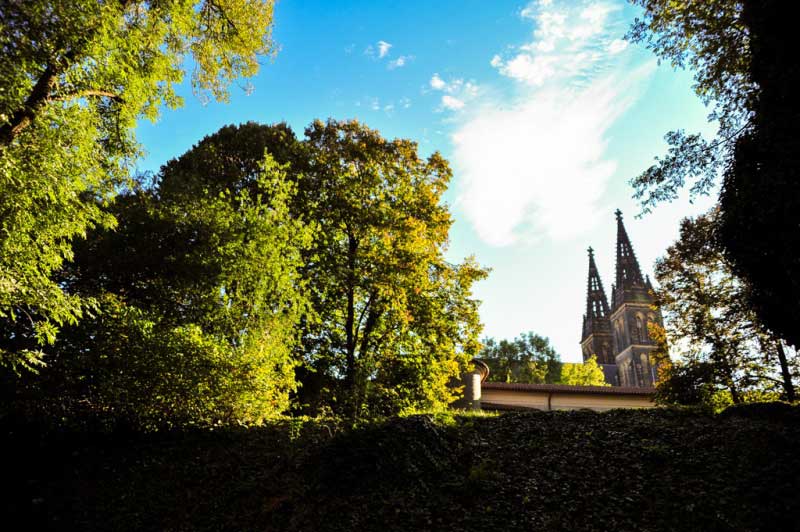 Vyšehrad was once a historical fort and is claimed to be one of the oldest places in Prague, being home to the first Bohemian King. It might require a small climb, but the view of the city from the fort wall is absolutely worth it. There are many playgrounds for children and a plenty of beer gardens for the adults. You can find both locals and expats spread out in the grass of the park casually drinking beer or taking it easy in the shade. A stroll through the cemetery might even lead you to find the grave of the famous composer Antonín Dvořák or other famous people. 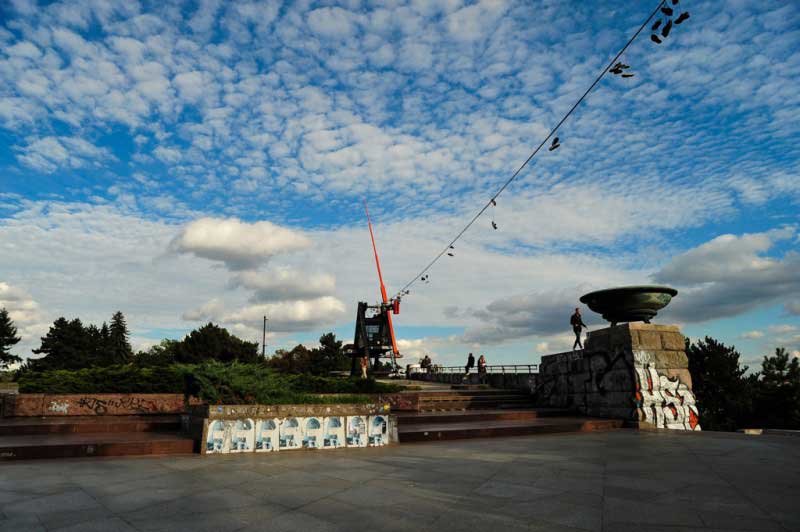 Letná Park is one of the most popular parks in Prague for both tourists and locals a like. The park is famous for its beer garden and for the hundreds of skateboarders you can find there on any given day. Letná used to be the home of the largest statue of Stalin in Europe, but a giant metronome now sits in its place. As you walk through the large park you might see people lounging, playing Frisbee or football, or even picnicking with family. 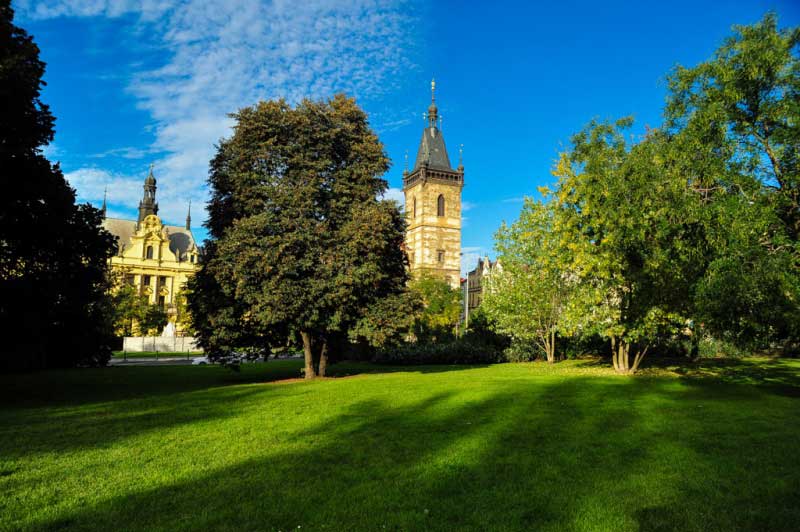 Karlovo náměstí is not the typical park you might see on a list like this, but never-the-less people (both tourists and locals) seem to enjoy hanging out on the grass on this famous square. You can see just as many people enjoying laying in the shade as there are sun bathing, and kids splashing in the fountain. It’s actually kind of perfectly located to take a break after work or a long day of sight-seeing. 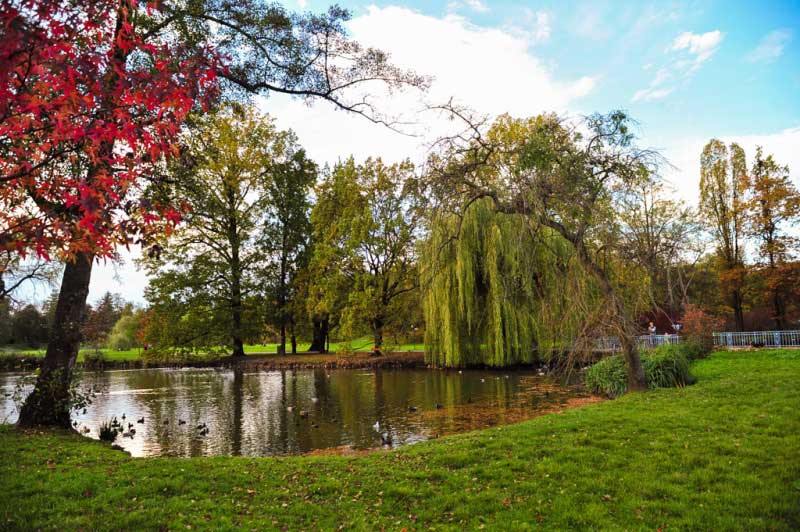 This park used to be the Royal Game Park. Now, it is literally a massive park with lots of trees and hills. Its right behind a hip neighborhood so there are plenty of interesting people hanging out in the park, walking their dogs or downing a nice cool beer. There are a few small lakes in the park that people like to sit by and feed ducks, and an exhibition ground where something is always happening. 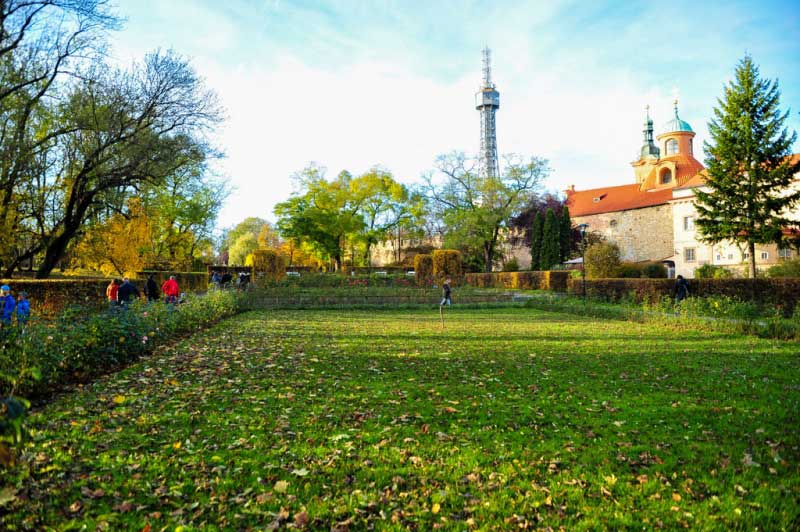 Petřín and its Rose Garden

Although Prague has many rose gardens, something about this garden has a certain warmth to it. Maybe it’s because of how much effort it takes to get there (either riding the tram or trekking up the hill), or maybe it’s just the beauty of the combination of the colored roses. The whole park of Petřín is also a great place to explore with a sort-of replica of the Eiffel tower and the historical Hunger Wall. The remains of an old orchard create beautifully colored blossoms on the trees. A funicular is fun way to get to the top, but be sure to have a valid tram ticket. 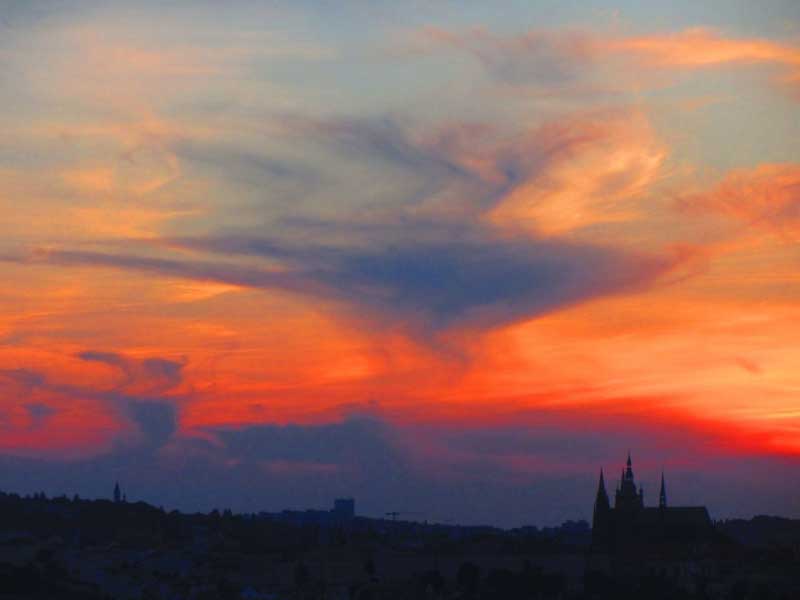 Sort of right behind Wenceslas Square and off the side of náměstí Míru, this park is notable for its one slanted field with a great view of Prague Castle and Malá Strana, especially when the clouds offer the right conditions for a colorful sunset. Less successful is its fenced-in beer garden, which has a Latin American prison–type feel. A smaller beer stand with rooftop seating is located in the center of the park, hidden by trees. Right next to this park but separated by a fence and often-locked gate is Rajská zahrada, which has a lovely manmade waterfall and a sign with a few too many rules. Rajská zahrada is technically in Žižkov, while Riegrovy sady is Vinohrady. 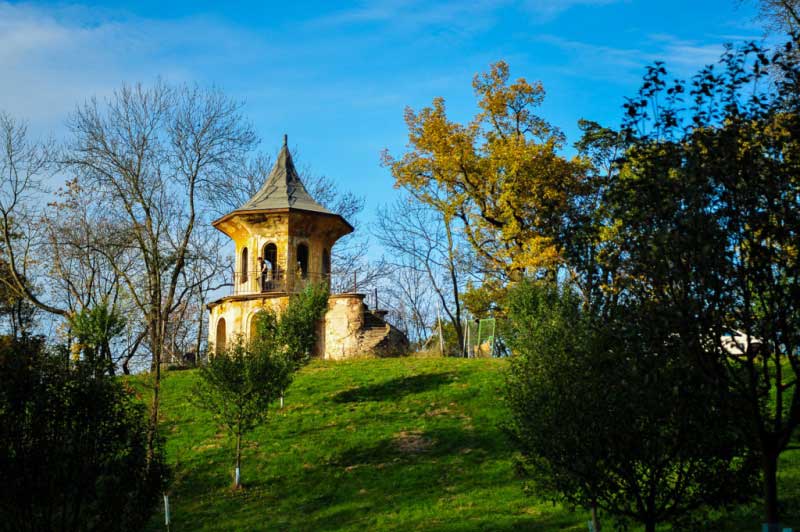 Although an interesting park, Cibulka is far from the city center and poorly maintained. The park has enough hills to get in a good workout and many statues and structures hidden among the trees and streams to keep you entertained. Upon entering the park from the tram stop you’ll soon run into a Chinese Pavilion which has become a famous symbol of the park. There is also an artificial ruin of a castle (you can climb to the top of the tower), a statue of Diana and statue deep in the woods with small gateway to the underworld. It’s not a typical park, but it has plenty of opportunities for exploration. The former manor house at the edge of the park is now luxury housing. 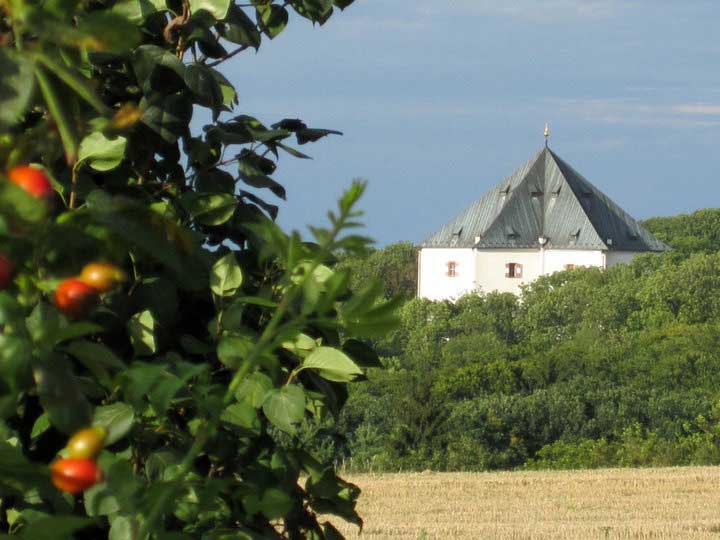 The park’s name, means “Star” and refers to a six-sided star-shaped Renaissance palace that sits in the center. The park is more forest-like than you would expect and has the illusion of seclusion even though there are many people strolling through the park. It is quite near Břevnovský Klášter, at the end of tramline 18 or 1, so you could do both in the same day. 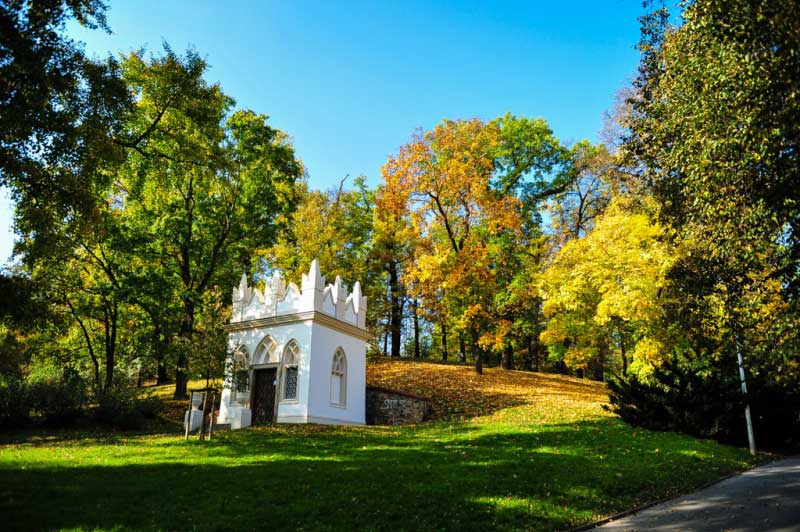 This park, located near Anděl, is basically an average park, but it’s a great place to come and grab some peace from the busy Prague streets. It has the usual patches of green grass between the walkways and benches and playgrounds. It also has a sneaky little footpath that cuts through the trees, perfect for the many dog walkers in the park. Attractions include a communist-era sculpture and two romantic-era pavilions. One is sometimes used as an art gallery, the other, called Temple of the Night, has a star map on its domed roof. 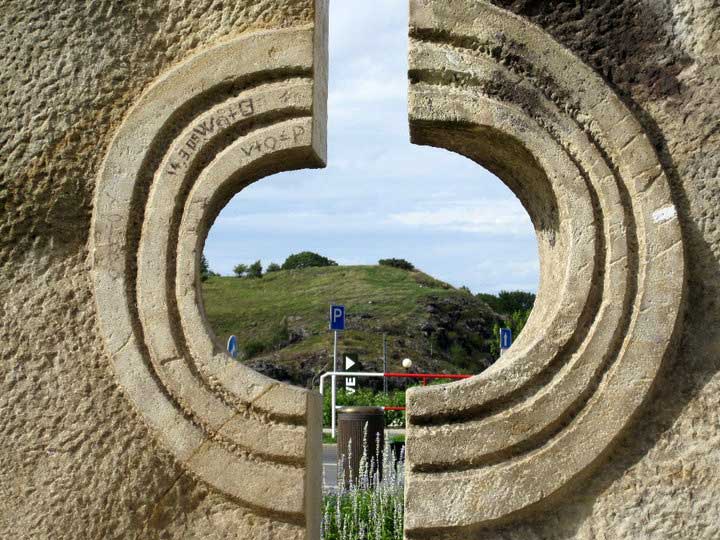 More of a winderness reserve than a city park, this rocky and overgrown place at the edge of the city is great if you want to get lost for the day. Streams and hills give the impression of not only leaving the urban area but going back in time. There is also an area for swimming.

Top 5 most relaxing gardens in Prague