Writer Franz Kafka lived almost his entire life in Prague, and the city often made an appearances in his stories and novels. It is not difficult to find the places where the author lived and worked: you just need to know where to look.

The place to start is Kafka’s birthplace at náměstí Franze Kafky 3. The house was at the edge of the Jewish ghetto. Franz was born July 3, 1883, to Hermann and Julie Kafka. In 1897 the house was damaged by a fire, and the entry way is the only original part. The house, now known as Kafkův dům, has a small exhibition about the writer and hosts exhibits.

Old Town Square was a focal point in Kafka’s life. He lived at dům U minuty, a late Gothic house with Renaissance frescoes, from June 1889 to September 1896. This was the birthplace of Kafka’s three sisters: Elli, Valli and Ottla.

The palace on the corner of Pařížská Street and the square, currently home to a CzechTourism info point, is Oppeltův dům. From November 1913, Kafka’s family lived in the top floor. The house was severely damaged in 1945: when it was restored the following year, the top floor wasn’t rebuilt.

The 18th-century Rococo-style Kinský Palace at Old Town Square 12 is now part of the National Gallery. On Sept. 10, 1893, a 10-year-old Kafka went there for his first day of German grammar school. He studied there until 1901. From 1912 to ’18 his father had a haberdashery shop at the ground floor. You can see a commemorative plaque on the inside wall.

At Old Town Square 17 you can see the house Zum Weißen Einhorn (“at the white unicorn”). The house belonged to the Fanta family, and Kafka took part to their philosophic gatherings in 1904–05. The adjacent house at number 16 used to be the location of Richard Löwy’s legal practice, where Kafka had one of his first jobs. Nearby at Celetná 2, you will see Sixtův dům where Kafka’s family lived for less than a year. 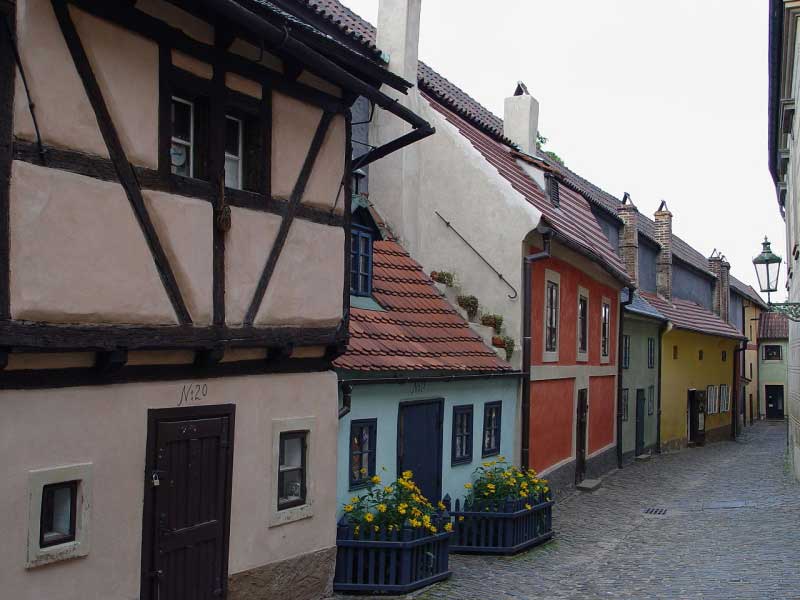 At Celetná 3 is U Tří králů (“at the Three Kings”). Kafka lived there from September 1896 until summer 1907. He tried his first literary experiments in his second floor apartment.

Near Old Town Square you can find more landmarks. Ovocný trh 3-5 is the main building of Charles University. Kafka studied there from 1901 to ’06, when he graduated in law. In Masná 18 you can pass by his elementary school, where he worried over his grades. At Masná 8 you can see the former German Business Academy where he attended an evening course on worker’s insurance. A number of other literates studied there, including Gustav Meyrink, author of the novel The Golem.

Not far from there, in Dlouhá 16, is another place where Kafka rented a room. According to Kafka’s letters to his fiancée Felice Bauer, his fifth floor room in U Zlaté štiky (“at the golden pike”) was very noisy due to the elevator. The building is an interesting example of Art Nouveau architecture.

The Josefov neighborhood has other two locations where Kafka lived. The first was Zum Schiff (“at the ship”) at Pařížská 36. The house was demolished in 1945 but is noteworthy because it played a role in The Metamorphosis: the novella was written here and the arrangement of the rooms in the story matched the building’s layout. His story “The Judgement” came to light here as well, in the night of Sept. 22–23, 1912. A hotel is where the house used to stand.

Kafka lived in an apartment that he rented in Bílkova 10. Kafka wrote in his notes how difficult it because he could hear all the noises made in the house, making it impossible to concentrate on writing.

Kafka particularly enjoyed house number 22 in the Golden Lane (Zlatá ulička) at Prague Castle. He rented this tiny house with his sister Ottla in 1916 and kept it until summer 1917. While there he wrote almost all the stories that were published in the 1920 collection A Country Doctor. Toward the end of the Golden Lane, next to the Dalibor Tower, you can see Jaroslav Róna’s 1993 sculpture Parable with a Skull, which represents one of Kafka’s characters.

In Malá Strana you can find the Schönborn Palace at Tržiště 15. Although this is now the US Embassy, in March 1917 Kafka rented a two-room flat here and was living there when he was diagnosed with tuberculosis. 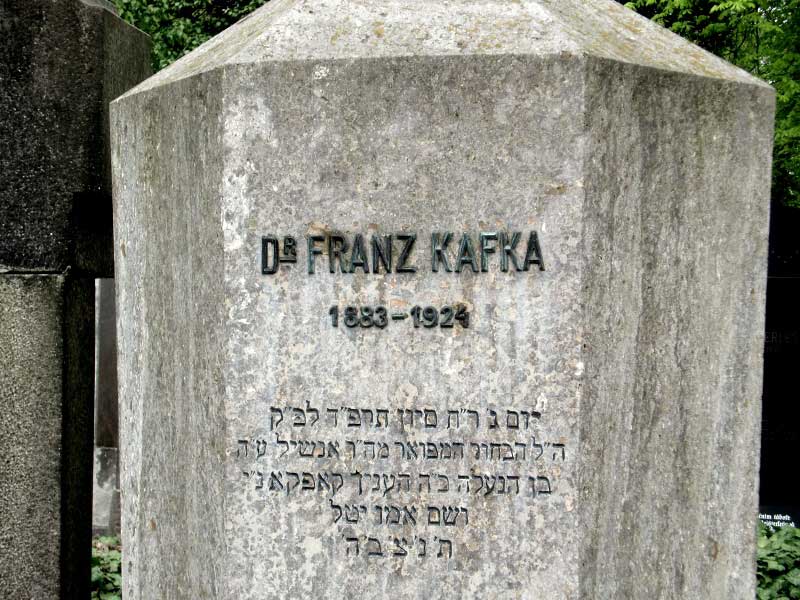 In the Nové Město part of Prague there are a few landmarks you shouldn’t miss. Kafka began working in 1908 as a clerk at the Workers’ Accident Insurance Institute for the Kingdom of Bohemia. You can still find the building at Na Poříčí 7, not far from the Palladium shopping mall. Kafka worked there from 8 a.m. to 2 p.m., a schedule that granted him plenty of time for his writing.

The neoclassic building at Panská 8 used to be the newsroom of Prager Tagblatt. Kafka not only read the German-language newspaper, but he also contributed short stories and occasionally wrote reviews.

Wenceslas Square has always been a crucial center for the city. At Kafka’s time, the Italian insurance company Assicurazioni Generali had its headquarters at number Václavské náměstí 19. Kafka started working for the company in October 1907, but the working hours were too binding for him: he often started working at 8 a.m. and wasn’t done before 8 p.m., leaving him with little time for writing.

The majestic Grand Hotel Europa at Václavské náměstí 25 has changed its name at least three times. In Kafka’s era it was known as Erzherzog Stephan (Archduke Stephan). Kafka gave the only known public reading of one of his works, The Judgement, there Dec. 4, 1912.

In Žižkov from 1912 to ’17, Kafka and his family owned an asbestos factory at Bořivojova 27. Kafka hated working there and reportedly even thought of committing suicide. However, the Žižkov scenery provided inspiration for The Trial as the location of the courthouse is a description of the neighborhood.

Kafka’s grave is in the New Jewish Cemetery in Žižkov. He died June 3, 1924 in Klosterneuburg, Austria, where he was treating his tuberculosis. His burial took place June 11. Kafka’s tombstone is a hexagonal crystal shape. There is also a plaque commemorating his sisters, who died in concentration camps during World War II. On the nearby wall is a plaque for Max Brod, who saved Kafka’s work from destruction and published it.

Several cafés are connected with Kafka. Café Louvre, at Národní 22, with its majestic halls and marble walls was the favorite meeting point of German-speaking intellectuals. The now-shuttered Café Arco at Hybernská 16was for artists and writers. Kafka met his love interest Milena Jesenská there. Café Savoy at Vězeňská 11, which is now Pastacaffé, used to host Yiddish theater presentations, and Kafka attended about 20 of them.

Finally, At the intersection of Dušní and Vězeňská streets there is a large, headless man carrying a small man who resembles Kafka on his shoulders. This 2003 memorial by Jaroslav Róna represents an image from Kafka’s story Description of a Struggle.

Travel is one of the world’s most coveted experiences. Year after year, millions

4 Legal Precautions to Take When Traveling

When most people travel, they tend to focus on the fun and

7 Best Things To Do and See in Prague

With Baroque, Renaissance, and Gothic architecture, Prague is a highly dense and

Accommodation is Key for a Perfect Trip

No matter where you travel, talking about vacation is almost always about

What You Can Do When Visiting Prague