Today, a graphic of the Orloj, the Astronomical Clock in Old Town Square, is on the main search page, with one letter o in Google depicted by the clock’s main face.

The clock was badly damaged by German soldiers at the end of World War II, but has been restored.

In daytime hours, a procession of saints appears every hour on the hour in windows that open above the clock face.

Reading the clock is quite difficult, but it shows the position of the sun and moon in the zodiac and gives time in a number of formats including Old Bohemian Time.

A wheel underneath turns one every year and shows the first names that are celebrated each day.

“Check out the Prague Astronomical Clock on Google Street View, from both the outside and the inside (and try taking the stairs!),” the search engine giant said on its page dedicated to archiving doodles.

“The hands of Prague’s astronomical clock have measured a staggering amount of history. It predates Shakespeare by over a century, and had been operational for two years by the time Joan of Arc was born. Despite over a half a millennium of wear and a brush with disaster in WWII, much of its original machinery remains intact, making it the oldest functioning clock of its kind in the world. Today’s Doodle honors a magnificent achievement in medieval engineering and a cultural landmark whose symbolism, design, and intermittent repairs are a remarkable catalogue of Europe’s past,” the description concluded.

The doodle can be seen in much of Europe and Latin America plus Australia, Japan and parts of Southeast Asia and Africa. 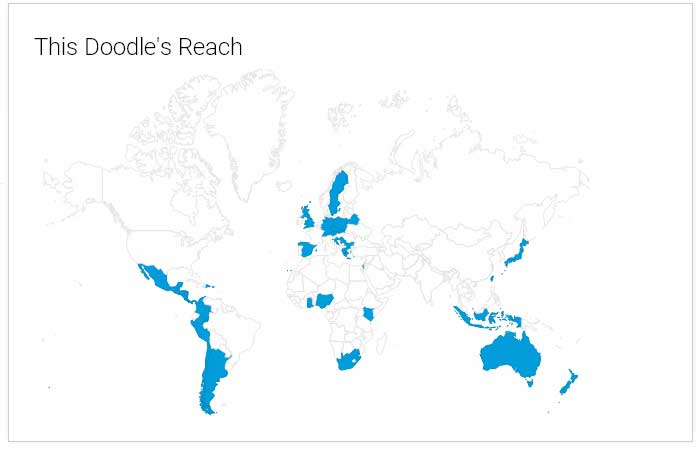 This isn’t the first time that Google made a special doodle for the Czech Republic.

His work played a central role in the development of paleontological reconstruction.

To mark the 25th anniversary of the Velvet Revolution, the search engine firm posted an image Nov. 17, 2014, of the name Google on a white-red-and blue banner with an upheld hand shaking keys. The image was only on home pages in the Czech Republic and Slovakia.

One Czech figure did have a reach almost across the world. Gregor Mendel, the Brno-based scientist and monk who came up with genetic theory, was honored on July 20, 2011, on his 189th birthday with a doodle made out of pea pods.

Slovakia got a special mention Jan. 1, 2009 when it adopted the euro.

The first special doodle was in 1998 for the Burning Man festival. Two years later, the company asked an intern, Dennis Hwang, to make one for France’s Bastille Day holiday. It was well received and started a tradition of making special logos for notable events, and a team now brainstorms ideas and makes designs. More than 2,000 have been used worldwide. The general public can suggest ideas, but the company says it receives hundreds of ideas each day, so the odds aren’t good.

Documentary: President was in LSD experiment