Jiří Fajt, general director of the National Gallery in Prague, and representatives of two German museums signed an agreement on cooperation on the international exhibition Charles IV 1316–1378. The Czech-Bavarian exhibition is under the auspices of prime ministers of the two countries, Bohuslav Sobotka and Horst Seehofer.

One highlight will be the coronation crown of Charles IV from Aachen, which has not been in Prague since it was originally used.

The German museums involved are the House of Bavarian History (Haus der Bayerischen Geschichte) in Augsburg, Germany, and the Research Centre for History and Culture of Central and Eastern Europe (Geisteswissenschaftliches Zentrum Geschichte und Kultur Ostmitteleuropas) of Leipzig University, Germany.

The exhibition will open May 14, 2016, the day of the 700th anniversary of birth of Charles IV, in the Wallenstein Riding School Gallery in Prague, and will continue in the Germanisches Nationalmuseum in Nuremberg in the autumn.

The exhibition will present Charles IV as a unique figure of Europe’s political and cultural history — a pious, well-educated, single-minded and judicious ruler, who did not hesitate to use a wide range of diplomatic means, including ruse and tactics, to attain his goals.

“One of the typical features of Charles’ ruling concept was the programmatic use of arts and architecture to promote the imperial majesty. Charles IV has gone down in history as one of the most generous patron of arts and founders as well as one of the most often depicted rulers in mediaeval Europe’s history,” Jiří Fajt, director of the National Gallery in Prague, said in a press release.

The exhibition seeks to show Charles IV devoid of distorting layers of ideological prejudice and offer to the public a portrait of him with his positive as well as negative qualities.

Charles IV will be presented against the background of a broad contemporary cultural-historical 14th-century context, including, among others, climatic changes, droughts and floods, poor harvests, famines, plague epidemics, Jewish pogroms and financial crises.

The admirable prosperity of arts and architecture of Charles IV will be set in this historical context with conspicuous overlaps to the present.

The exhibition will have 170 exhibits in art and arts and crafts, cultural-historical documents loaned by more than a hundred European and U.S. museums and church and private collections.

The goal is to answer questions such as:

Was the life at the imperial court so detached from the not always satisfactory reality of the mundane life of common people? How did his contemporaries perceive Charles IV? Where did he get the money for the spectacular and costly imperial presentation? How were the holy relics acquired and what was the role of arts in the service of Charles’ imperial policy? Who were the people who acted in the Emperor’s name and secured the support he needed so much?

Artistic ventures of Charles IV and members of his imperial court, which were undertaken in Prague, Nuremberg, Aachen, Frankfurt am Main other artistic centrers of the Holy Roman Empire will be displayed alongside their inspirational models of Byzantine, Italian or French origin.

”This is how we want to disclose the mystery of each artistic commission to the visitor. Stories of individual artworks will reveal the commissioner’s motivation and experience and inspiration, which helped the artists meet the expectations. Classic questions of the history of art will thus materialize in an exhibition project,” Fajt said.

A major exhibit will be a unique, elaborate gold crown decorated with precious stones and antique gems. It was placed on the reliquary bust of Saint Charlemagne in the church treasury in Aachen.

Charles IV had it made in Prague in 1349 and took it to the ancient imperial town in Aachen where he was crowned King of Rome.

After his coronation, Charles IV symbolically donated this coronation insignia of Roman kings to the reliquary bust of his namesake and holy patron.

Today, Charles’ crown and Charlemagne’s reliquary bust are major sacred objects of the Holy Roman Empire and the most precious relics of German and European history.

The crown will be exhibited in Prague for the first time since it was made.

Goldsmiths’ artworks documenting the close ideological connection of Charles’ court milieu with the late classical tradition of Byzantine emperors in Constantinople will be loaned from Venice, Italy. 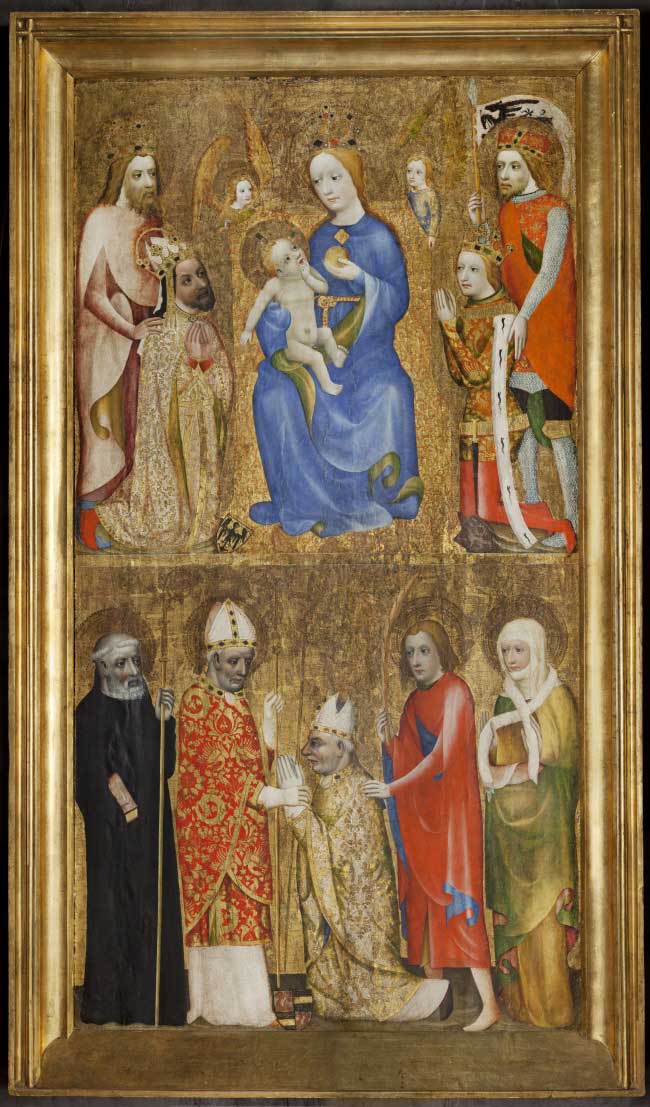 Masterful artworks by Venetian mosaic makers for the Church of San Marco, who were invited by Charles IV to do the large scene of the Last Judgment on the southern facade of the St Vitus’ Cathedral in Prague around 1370 will also be displayed.

The artistic milieu of imperial Prague will be shown in numerous paintings, manuscripts and artworks by goldsmiths and embroiderers as well as sculptures of wood and stone, often of monumental dimensions, such as, among others, a tympanum decorated with figures from the northern portal of the Church of Our Lady before Týn, the major parish church in the Old Town of Prague, or a high relief with the kneeling royal couple of Charles IV and Blanche of Valois from the Carmelite monastery and Church of Our Lady of the Snows in Prague’s New Town.

The exhibition Charles IV 1316–1378 presents scientific findings of various international research projects in the last decade. Charles’ court culture will therefore be shown in a different light – it will cover not only Prague but also the free imperial city of Nuremberg, the second major residence of Charles IV after Prague; this Frankish capital was much more than just “Bohemia’s province” as it was usually called in professional literature – Nuremberg was a major and artistically autonomous centre and became the crossroads of artistic influences and inspirations from imperial Prague as well as influential centres of western Europe.

The exhibition will also explain the complex relations of the Prague-Nuremberg circles of Charles’ court to other centres of the Empire, such as Strasbourg, Cologne, Mainz, Erfurt, Magdeburg or Vienna of the Habsburgs. Under Charles IV, Prague as a cultural and artistic capital has assumed an irreplaceable status on the European continent.

“The exhibition also take notice of the response to Charles IV and his era in the following centuries, especially with respect to the traditions of perception of his legacy in the Czech and German milieus, which were so different from each other – in the former, he was venerated as the ‘father of the homeland’ and the ‘greatest Czech,’ while in the latter he was seen as ‘the Empire’s step-father,’ Fajt said.

“The professional public has done a lot to provide a more objective view of this unique figure of European history in historical terms, but the results of the historical research have never been presented to the broad public – and to do so is one of the basic goals of this exhibition,” he added.

The exhibition will be accompanied by a large multifarious program of activities in both venues, Prague and Nuremberg. The viewers will be able to see a number of exhibition projects in the partner museum institutions in Bohemia and Bavaria; they will be able to follow in Charles IV’s footsteps in the places linked with his life and admire the royal architecture and art in their original milieus.

The accompanying program will include scientific symposia, workshops, theatre and musical performances on both sides of the borders. A feature documentary film, too, is under way as an unusual psychological probe of the depths of Emperor Charles IV’s soul.

The Czech part of the accompanying program is a result of cooperation of the National Gallery in Prague, Ministry of Culture of the Czech Republic, Prague Archdiocese, Charles University in Prague, Academy of Sciences of the Czech Republic, Municipality of Prague and colleagues from the national cultural institutions and conservation institutes, museums, galleries, historical cities, castles and chateaus etc.

For the second 1787 stay in Prague, Mozart and his wife Constanze

Mozart and the Palais Pachtuv in Prague

Oral tradition acquires in time, of course, its significant historical value, however