The most famous Czech photographer and comic illustrator are fraternal twins

Both artists turned 80 in May, and a retrospective of their careers is now at Gallery of Art Prague on Old Town Square.

The exhibition has almost 100 of Jan’s photographs mostly in black and white plus some of the props he used in his more famous work.

Kája’s gets a slightly larger focus, with 160 of his works on display. A replica of his workshop also takes up half of one of the gallery’s rooms.

While Jan is still active as an artist, Kája has been hospitalized since 2006 following an accident.

Goodbye Jan! from 1994 is one of his more controversial. A seated woman wearing nothing but striped socks is pointing an antique revolver into her mouth. A counterpoint to this photo is his 1987 effort called The Knife, featuring a woman again is just socks seen from the side. She is holding a switchblade angled up, mimicking an erect penis. 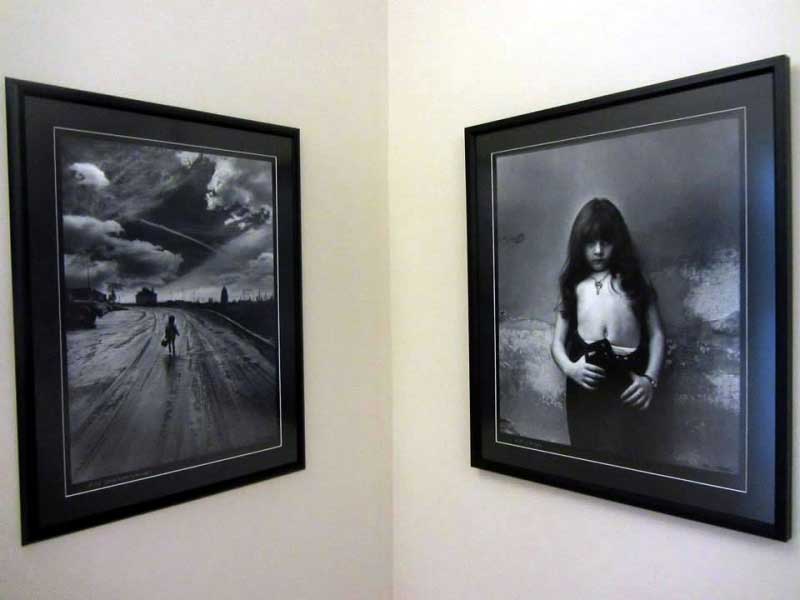 The latter photo was featured on the cover of For the Beauty of Wynona, a 1993 album by Canadian songwriter and record producer Daniel Lanois. Jan’s work is also on covers of CDs by Soul Asylum and Beautiful South.

Kája’s work is a bit less edgy, although buxom woman are again a prominent theme. His work is also quite diverse, ranging from original sketches for graphic novels up to large-format paintings. He also contributed to a few films such as Who Wants to Kill Jessie?, a 1996 sci-fi comedy about a cartoon character that is accidentally introduced into the real world. A poster he designed for that film is among the items on display.

He cites Walt Disney and Robert Crumb as influences, and that can be seen clearly in his work.

One drawback for people who aren’t fluent in Czech is that the graphic novel illustrations are a bit heavy on text.

Both brothers had trouble with censorship in communist era. Kája ran into constant difficulties, with some of his comic series being banned for their themes as well as their criticism of the regime. Many of his underground works were reprinted after 1990.

Jan was forced worked clandestinely for much of the 1970s, and was only given permission to work openly as an artist in 1983. His trouble with censorship continued after the fall of communism. One of his photographs was withdrawn from a Ballarat International Foto Biennale in 2011 on the eve of the opening due to the age of a semi-nude model. That same photo is on the cover of a CD by French symphonic black metal band Anorexia Nervosa, however.